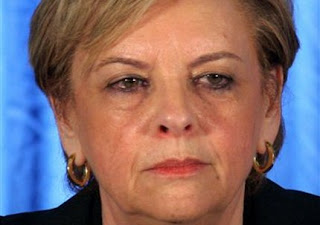 This is par for the course for Dorit Beinish’s court. We know she has nothing but contempt for religious Jews, that she was involved in a conspiracy against right-wing groups, authorizing an agent provocateur to participate in activities for the expressed purpose of infiltrating right-wing religious groups and inciting them to criminal behavior—known as “The Raviv Protocol.” In that protocal, in a conversation between:


Ben-Ami says, “Dorit Beinish gave approval for his activities next to Bar-Ilan University, to incriminate someone else who would then be caught.”

She also ruled against the Hevron Peace House, and for the destruction of Jewish homes, and a myriad of other issues—always against religious or right-wing groups.

Now, in this decision, Beinish rules that “The right to access to the Temple Mount is not absolute, and the [police’s] decision to restrict it due to concern for the public safety does not give us cause to intervene.”

Yet, only last year, she said the following in her ruling supporting a permit to allow a gay pride parade in Jerusalem:

"Authorizing the Gay Pride parade allows for the realisation of the right to expression and demonstration … It allows the marchers to voice their message by virtue of their right for equality and social recognition. Additionally, the permit affords deserving priority to the principle of the rule of law, and to the perception that violence is not to be rewarded nor succumbed to.”

Jews praying at the Temple Mount is a “security issue” from which the Supreme Court must excuse itself, but a Gay Pride Parade is something SO important that it can’t be stopped because they don’t want “the perception that violence is not to be rewarded nor succumbed to.”

Isn’t restricting Jews from the Temple Mount rewarding the violence of the arabs? Jews weren’t involved in violence, they were simply ascending the Temple Mount as part of the religious obligation of Sukkot.

You might want to check in the mirror before you leave the house tomorrow—I think your bias is showing!!

(Quick, Dorit! Place a GSS Agent Provocateur in the next group of religious Jews trying to ascend to the Temple Mount so that you can show the world how dangerous religious Jews are! . . . Or maybe you already did . . . )


(IsraelNN.com) The Supreme Court ruled Thursday night against hearing a case brought by Temple Institute Director-General Yehuda Glick accusing police of discrimination against religious Jews on the Temple Mount. Justices Dorit Beinisch, Hanan Meltzer and Yoram Danziger determined that police's decision to bar non-Muslims from the mount was a security-related matter in which the court should not interfere.

"The right to access to the Temple Mount is not absolute, and the [police's] decision to restrict it due to concern for public safety does not give us cause to intervene,” the justices wrote.

Police argued that “recent violent events on the Temple Mount and in the Jerusalem area” were sufficient cause to keep Jews and other non-Muslims off the mount in order to avoid further angering Muslim rioters. Muslim worship has been limited as well, police attorneys pointed out – only Muslim men over the age of 50 are allowed to attend prayers on the Temple Mount, as are Muslim women of all ages.

Access to the Mount has been limited for several days, since Muslim rioters attacked a group of religious Jews who visited the Mount. Muslim leaders later issued a call accusing Israel of plotting to destroy the Al-Aksa Mosque atop the Mount, sparking riots that spread to the greater Jerusalem area.

Beyond arguing that police should not selectively bar Jewish worshippers while allowing Muslim worship to continue, Glick had also argued that police had a general policy of discriminating against religious Jews when it came to Temple Mount access. On multiple occasions, he said, police allowed religious Jews to ascend the mount only in small groups, while Muslims, other non-Jews, and Jews who were not religiously observant were allowed to visit the Mount in large numbers.

Regarding Glick's complaint of routine discrimination, the court ruled that Glick should address his complaints to the relevant officials within the police force. Glick had argued that he complained to police, but his complaints were ignored.

Glick: At Least I Wasn't Silent
Following the court's refusal to hear his plea, Glick said he had at least accomplished his primary goal – he had not stood silent in the face of discrimination.

“I had one central focus,” he said, “the desecration of G-d's name caused by the fact that during the seven days of Sukkot, when we are commanded to go up to the place which G-d chooses, the Temple Mount, the Mount is closed to Jews due to Muslim violence and nobody speaks out in protest.”

"At least now, we can say that we were not silent, that we protested using the measures available to us,” he added.

If the Supreme Court had accepted his report of discrimination and closed the Temple Mount to worshippers of all faiths, Jews would be blamed for the subsequent Muslim riots, Glick said. “Now, if the Muslim violence continues – and they have proclaimed tomorrow a 'Day of Rage' – they won't be able to blame the Temple Mount faithful for causing the violence,” he stated.