There are a lot of questions to be answered here. For example, why would Chabad of Linchfield, CT want to erect a steeple on the synagogue? It seems such a strange addition to a Chabad house. Steeples are associated with xtian churches, not synagogues, and even if you look into the historical records, only Jews from reform congregations, who wanted to make their synagogues into churches (and sometimes even referred to their synagogues AS churches) were the only Jews to put steeples on their synagogues. 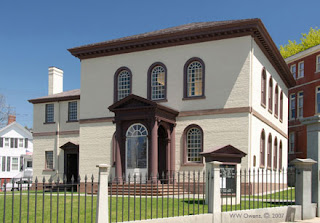 Does this rabbi have no clue as to what a steeple might suggest? If he wants to get "historic" why doesn't he look to the architecture of the Touro synagogue, a distinctly historic building with New England roots, built in 1758 in Rhode Island. It doesn't have a steeple!

As far as the histoic commission is concerned, I'm sure they have some valid reasons for not wanting the development of the synagogue, but I'm sure that they might have some invalid reasons as well. It is too bad that it is so difficult to separate the two.

For example, although the article states that "large churches" have been built in the historic district, they don't mention that those churches were renovations of existing structures. Perhaps the problem is that they don't want the renovation of an existing house?

Also, xtians often don't realize that synagogues cannot be built in a "church district" away from homes the way churches are (this is a perennial problem in the West, especially in "planned" communities). They don't understand that we can't drive to synagogue. We need to walk. In order to do that, synagogues have to be part of the fabric of a residential district.

Another distressing issue in this article is that it appears that the city council member who is most blatantly outspoken against the synagogue is a Jew. I understand that she may not be religious, and that she may not agree with Chabad's way of looking at Judaism, but it's a dang shame this has to to look so bad to the non-Jews.

I hope this whole thing can be worked out, but I'm sure it is an uphill battle for Chabad. Certainly, we must fight for our rights, our synagogues, our religion, and our way of life. Jews are as American as the Revolutionary War which, by the way, we financed!

A religious freedom suit over the right of a town to restrict the building plans of an Orthodox Jewish group has been filed in federal district court in Hartford.

Chabad Lubavitch of Litchfield County, which has been active in this quaint, scenic town during the past decade, has been trying for three years to build a synagogue and a large addition to the 19th century house it owns just off Litchfield's historic green.

But under acrimonious circumstances that many critics have said bordered on anti-Semitism, the Borough of Litchfield's Historic District Commission denied Chabad Lubavitch's application in December 2007. Chabad Lubavitch is now suing on several grounds, including the federal Religious Land Use and Institutionalized Persons Act. The 2000 law prohibits government agencies from imposing regulations that would restrict a group's religious practices, unless there is a compelling government interest.

"The Litchfield community — Jew and Gentile — and its clergy, have been most welcoming and supportive in all our programs," Rabbi Joseph I. Eisenbach said in a statement after the suit was filed this week. The rabbi first became known in Litchfield County in 1996 after he won a highly publicized battle to install a menorah on the Litchfield Green during the December Hanukkah season.

"And it is a shame that some elected officials have made it their mission to try and block the Synagogue, with statements from a historic commission member claiming that 'there is no place for a Star of David on the Litchfield Green,'" Eisenbach continued."We had gone through the due process, and sadly we are forced to reach out to the federal government as a last resort."

Chabad Lubavitch operates out of a 1,500-square-foot, warehouse-style space in a small mall about a half-mile from the green. The group says these quarters are inadequate for religious services and its active, interfaith community programs, which include a preschool, a summer camp, arts fairs and a popular summer music festival.

In 2006 the group bought the historic but rundown Deming House off the green and filed applications with the historic commission to remodel it with such features as a wall made of Jerusalem stone and a steeple with the Star of David. The building plans are for a 21,000-square-foot addition behind the old house that would include a synagogue, living space for Eisenbach and his family, a community center and kosher kitchens.

A Meticulous Borough
Litchfield is famously meticulous about maintaining its historic district. The town's several square blocks of stately mansions, 19th century commercial facades and gardens behind picket fences have made the borough a summer haven for celebrities and one of Connecticut's most popular tourist destinations. Earlier battles over the town's pristine appearance have included a crackdown over a bed and breakfast owner's installation of flower boxes and the clothing chain Talbot's leasing commercial space on the green.

During hearings in 2007, members of the historic commission made many objections to Chabad Lubavitch's expansion plans. They objected to the size of the addition, even though the commission had granted permission for similar expansions to town hall and the public library. Several neighboring churches are as large, or larger, than the planned synagogue expansion. Eisenbach has said that his group made more than 40 changes to their architectural plans to accommodate early criticisms from the commission and worked to retain the historic facade of the Deming house.

But it was several pointed remarks made during the hearings about the planned synagogue's religious symbols that generated the most controversy and national media attention.

Commission Chairwoman Wendy Kuhne, for example, said during the hearings that the Jerusalem stone was "not indigenous" to the district and also said that the synagogue's planned Star of David "does not comply with the district."

In the controversy that followed, after Eisenbach and others pointed out that the Methodist Church next door displayed a stained glass window with a large Star of David — rescued from a demolished New Haven synagogue — Kuhne, who is Jewish, recused herself from the hearings.

During the hearings, according to Chabad Lubavitch's federal complaint, commission members also derided the group's building plans by comparing them to a "strip joint," and stating, about the Jerusalem stone, "Stone from Israel? We'll have to get the whole town out for this one."

"The defendants [the Litchfield Historic Commission] have engaged in a targeted and deliberate effort to prevent the Plaintiffs from developing the property and [using] it as a place of worship, while permitting other development within the town that is substantially similar to the modifications proposed for Plaintiff's property," Chabad Lubavitch's Hartford attorney, Kenneth R. Slater, wrote in the federal complaint. "This targeting has been based in large part on anti-Hasidic animus."

The group's plans to build in Litchfield have been supported by the Connecticut ACLU and other civil liberties groups, and Chabad Lubavitch has many supporters in Litchfield County. Lee Losee, the Litchfield borough warden — the equivalent of first selectman — is on record as supporting Chabad Lubavitch's plans. Many Christian ministers who have shared interfaith services with Eisenbach have also spoken out in favor of the group's expansion plans.

"It's a very big shame — I would personally even say a disgrace — that Litchfield denied these permits for Chabad," said the Rev. Thomas Drobena, the pastor of Holy Trinity Lutheran Church in Torrington.

"Jewish-Christian relations are actually quite good out here in Litchfield County, and many of us regularly attend worship with Rabbi Eisenbach and at other synagogues.

"Jewish symbols are absolutely not a threat to a historic district," Drobena said, "and anyone who says they are just doesn't know their history. Christians and Jews share a common heritage that's really essential to the fabric of New England."
Posted by Unknown at 4:57 AM