A large and Magnificent 2,000 Year Old Miqve was Exposed in the Western Wall Tunnels

A large and impressive ritual bath (miqve) from the end of the Second Temple period was recently uncovered in archaeological excavations the Israel Antiquities Authority is carrying out in the Western Wall tunnels, in cooperation with the Western Wall 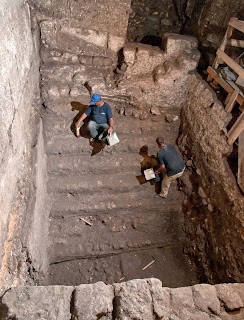 The miqve was discovered inside the western hall of a splendid structure that is located just c. 20 meters from the Western Wall. Parts of the building were discovered in the past and the Israel Antiquities Authority is currently exposing another one of the three halls inside it. It is one of the most magnificent structures from the Second Temple period ever to be uncovered.

The edifice is built of very delicately dressed ashlar stones and the architectural decoration in it is of the highest quality. From an architectural and artistic standpoint there are similarities between this structure and the three magnificent compounds that King Herod built on the Temple Mount, in the Cave of the Patriarchs and at Allonei Mamre, and from which we can conclude the great significance that this building had in the Second Temple period.