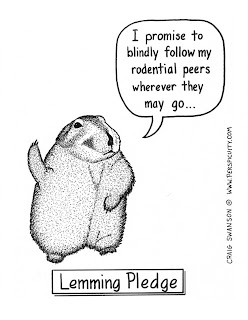 B"H
These social scientists have discovered that when at least ten percent of the population of a social group are "a committed minority" (i.e. they are stubbornly in favor of something that the majority doesn't agree with), that the minority will serve as "agents of change" and will turn the majority to their way of thinking.
This makes a lot of sense, but it hasn't been tested in the "real world."  It has only been done through computer models.
I would think that ten percent would have to be pretty convincing to start turning over the majority opinion on some issue, but I am also thinking that in certain areas--such as political philosophy, religious devotion, nationalism, and loyalty to close friends, family, and business relationships--this concept would fall flat.
I think that the more personally important those beliefs are, the less likely that you will change those beliefs when challenged.
I think the model will end up being tweaked a bit, as it is my firm belief that there are some areas where people will not budge because we are culturally reinforced not to budge through stories of righteous people, martyrs, and refuseniks.
We are not entirely cattle, thank G-d, waiting to be lead in a particular direction.  There will always be those who do not change, will not change.
For example, Jews have been flourishing since the time of Abraham and no matter what happened--expulsion, slavery, inquisitions, pogroms, laws against religion, Holocaust, socialism, assimilation--we are still here and we refuse to be anything but Jews.
However, in the case of less important matters--style, political choice, consumer choice, educational philosophy, etc.--I think this theory will hold up.
My hypothesis?  I believe the theory will come to read:  Ten percent committed minority will change majority views on issues the majority does not perceive as "personal core beliefs."  However, when the minority challenges the majority's perceived personal core beliefs, the majority with either hold fast to those beliefs or influence the minority, however committed, to adopt majority beliefs or remain silently neutral.
If you want to test your own hypothesis relating to this study, they are looking for social scientists willing to research historical models to test the theory.
M
-----
Scientists discover tipping point for the spread of ideas
Researchers have found that minority rules; when only ten percent of the public holds a firm opinion, the majority will always follow.
http://www.jpost.com/Health/Article.aspx?id=231190
By RENSSELAER POLYTECHNIC INSTITUTE
07/27/2011 13:22

Troy, N.Y. – Scientists at Rensselaer Polytechnic Institute have found that when just  10 percent of the population holds an unshakable belief, their belief will always be adopted by the majority of the society.
The scientists, who are members of the Social Cognitive Networks Academic Research Center (SCNARC) at Rensselaer, used computational and analytical methods  to discover the tipping point where a minority belief becomes the majority opinion.
The finding has implications for the study and influence of societal interactions ranging from the spread of innovations to the movement of political ideals.

“When the number  of committed opinion holders is below 10 percent, there is no visible progress in the spread of ideas. It would literally take the amount of time comparable to the age of the universe for this size group to reach the majority,” said SCNARC Director Boleslaw Szymanski, the Claire and Roland Schmitt Distinguished Professor at Rensselaer. “Once that number grows above 10 percent, the idea spreads like flame.”

As an example, the ongoing events in Tunisia and Egypt appear to exhibit a similar process, according to Szymanski. “In those countries, dictators who were in power for decades were suddenly overthrown in just a few weeks.”

The findings were published in the early online edition of the journal Physical Review E in an article titled “Social consensus through the influence of committed minorities.”

An  important aspect of the finding is that the percent of committed opinion holders required to shift majority opinion does not change significantly regardless of the type of network in which the opinion holders are working. In other words, the percentage of committed opinion  holders required to influence a society remains at approximately 10 percent, regardless of how or where that opinion starts and spreads in the society.

To reach their conclusion, the scientists developed computer models of various types of social networks. One of the networks  had each person connect to every other person in the network. The second model included certain individuals who were connected to a large number of people, making them opinion hubs or leaders.
The final model gave every person in the model roughly the same number of connections. The initial state of each of the models was a sea of traditional-view holders. Each of these individuals held a view, but were also, importantly, open minded to other views.

Once the networks were built, the scientists then “sprinkled” in some true believers throughout  each of the networks. These people were completely set in their views and unflappable in modifying those beliefs. As those true believers began to converse with those who held the traditional belief system, the  tides gradually and then very abruptly began to shift.

“In general, people do not like to have an unpopular opinion and are always seeking to try locally to come to consensus. We set up this dynamic in each of our models,” said SCNARC Research Associate and corresponding paper author Sameet Sreenivasan.
To accomplish this, each of the individuals in the models “talked” to each other about their opinion. If  the listener held the same opinions as the speaker, it reinforced the listener’s belief. If the opinion was different, the listener considered  it and moved on to talk to another person. If that person also held this new belief, the listener then adopted that belief.

“As agents of change start to convince more and more people, the situation begins to change,” Sreenivasan said. “People begin to question their own  views at first and then completely adopt the new view to spread it even  further. If the true believers just influenced their neighbors, that wouldn’t change anything within the larger system, as we saw with percentages less than 10.”

The research has broad implications for understanding how opinion spreads. “There are clearly situations in which it helps to know how to efficiently spread some opinion or how to suppress a developing opinion,” said Associate Professor of Physics and co-author of the paper Gyorgy Korniss. “Some examples might be the need to quickly convince a town to move before a hurricane or spread new information on the prevention of disease in a rural village.”

The  researchers are now looking for partners within the social sciences and  other fields to compare their computational models to historical examples. They are also looking to study how the percentage might change  when input into a model where the society is polarized. Instead of simply holding one traditional view, the society would instead hold two opposing viewpoints. An example of this polarization would be Democrat versus Republican.

The research was funded by the Army Research Laboratory (ARL) through SCNARC, part of the Network Science Collaborative Technology Alliance (NS-CTA), the Army Research Office (ARO), and the Office of Naval Research (ONR).

The research is part of a much larger body of work taking place under SCNARC at Rensselaer. The center joins researchers from a broad spectrum of fields  – including sociology, physics, computer science, and engineering – in exploring social cognitive networks. The center studies the fundamentals  of network structures and how those structures are altered by technology. The goal of the center is to develop a deeper understanding of networks and a firm scientific basis for the newly arising field of network science.