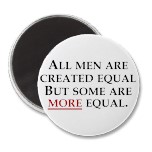 B"H
Strange that Bibi would say that "no one is above the law," even though there are numerous Imam's preaching hate and incitement in Israel every week, but they are very unlikely to be arrested.
However, a rabbi who endorses a book about the halacha of war, who doesn't actually incite or preach violence, is arrested.  Hmmm.
I guess some people in Israel are just "more equal" than others?
Frankly, I'm really sick of the bias against Jews that Israel shows on a daily basis.
Thousands of illegal arab structures are peppered all over Israel, but only the Jewish structures are raised.  Illegal mosques are built but never touched, but synagogues are raized.
I think we would all be a little better about not laughing right in Bibi's face if what he was saying was actually true.
It's not.
We know it.
M
-----
Thousands march in J'lem in protest of Rabbi Yosef arrest   MKs Ben Ari and Katz address crowds; two Arab youths pepper sprayed by demonstrators; police try to disperse crowds using water cannons; Netanyahu on Rabbi Yosef detainment: "No one is above the law."
By JONAH MANDEL AND MELANIE LIDMAN
http://www.jpost.com/VideoArticles/Video/Article.aspx?id=227690
Over  a thousand haredi supporters of Rabbi Yaakov Yosef gathered outside his  house on Sunday, to protest his detainment by police earlier in the day. MKs Michael Ben Ari and Yaakov Katz both addressed the crowds. Two Arab youths were sprayed with pepper spray by some of the demonstrators. Many protesters also tried to march to the Shimon Hatsadik grave in east Jerusalem in order to pray. Police arrested several people and tried to disperse the crowds using water cannons.
Earlier  Sunday, Prime Minister Binyamin Netanyahu commented on Rabbi Yaakov Yosef's detainment by police, saying "Nobody is above the law." Netanyahu made the comments at the start of the weekly cabinet meeting in Jerusalem. "Israel is lawful nation, as I said a few days ago. Nobody is above the law – and I demand that every Israeli citizen respect the law," Netanyahu said. Police arrested Rabbi Yaakov Yosef on Sunday morning on his way home from morning prayer, and questioned him on suspicion of incitement to violence and racism over his alleged endorsement of the controversial Torat Hamelech (The King’s Torah) book. Yosef's arrest came after police repeatedly beseeched him to turn up for questioning on his own volition, but the rabbi refused. “We  were returning from morning prayer at the Tomb of Shimon Hatzadik – my father, a student who was driving the car, and I,” relayed Yosef's son Amram. “At a quarter to seven, when we were at the hotel  junction on Route 1, police detectives stopped the car, and removed the  driver and I. They took my father to the nearby national police headquarters for a few minutes of questioning, and then released him.” Torat Hamelech,  by the rabbi of the Yitzhar settlement, Yitzhak Shapira, gives Jews permission to preemptively kill gentiles under certain conditions in wartime. The Yosef family knew that Yaakov's arrest was imminent and inevitable, after Rabbi Dov Lior was taken in   for  the same reason last week. But they also insisted that Yaakov shouldn't  show up for police questioning, since they said there was no equality before law, and a rabbi shouldn't be questioned for writing about Torah. “Father  didn't want to show up for investigation since he endorsed a Torah composition, which shouldn't be given to investigation since intellectuals in Israel have freedom of expression,” Amram said. “It is inconceivable that people like Ben Gurion University professor Dr. Eyal Nir said that right-wing marchers' necks should be broken, and nothing came out of that incitement to murder. My father only expressed a scholastic Torah opinion. This is all an attempt to harass rabbis from the Right,” said Amram. Amram said that at 2 p.m. Sunday, a protest will be held at the Shmuel Hanavi neighborhood, during which thousands are expected to protest the arrest and “contempt for the dignity of Torah, which is publicly being trampled by police and the State Attorney's Office.” Yosef is the son of Shas's spiritual leader Rabbi Ovadia Yosef, and his arrest – or detainment, as police defined it – is feared by law enforcement to lead to disruptions in the capital. Shas  had no comment on the detainment in questioning, due to the fact that the party's spiritual leader Rabbi Ovadia Yosef had reportedly reacted with anger when he heard his son had refuse to show up for the police questioning, and called him a fool. Immediately following news of the arrest,  demonstrators tried to block the light rail path on Haim Bar Lev Street/Highway 1 with burning tires. Three men were arrested and brought  for questioning. The light rail was able to continue operating without delay.  MK Katz called on yeshiva students to gather around Yosef's home, “to express our admiration and estimation for a great rabbi, while keeping the law.” “We will win by continuing to grow  and wait till we are the majority in the state, then we will legislate the appropriate laws, through which we will investigate anyone who broke  the law on behalf of the courts and State Prosecution's Office clique, who sat on the neck of the Jewish people and committed crimes against it,” his statement continued. “The Netanyahu government is losing  its moral legitimacy by abducting and arresting two Torah giants. This is a crime that the People of Israel won't be able to forgive.” Yaakov Lappin contributed to this report.