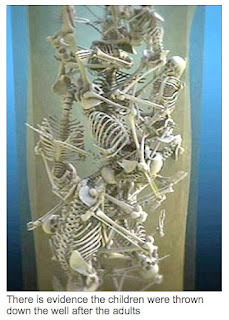 B"H
Even after centuries, this story makes me cry.  It doesn't matter how long ago it was, when the people look like you, share your genes, share your traditions and your ways.
I can hear the screams of the mothers as they are parted from their children.  I can hear the crying of the children, especially the two-year-old, who was probably picked up by one of the teens as a last act of comfort before death.
There is a good reason people were thrown into wells.  It was to poison the well, so that no one could ever use it again.  The story says that the community lived around this well, so it was probably the main source of water.
I wonder why those who attacked the family didn't kidnap the children and force them into a convent, which was common at the time.  My only answer comes from the well.
I imagine that the family is that of the rabbi or other important leader of the community.  I imagine that the whole community was gathered to watch the horror in order to force them to leave.  I imagine the adults were probably tortured by hanging them upside-down, putting them in the water, pulling them up, then, finally, when they lost consciousness, dropped.
I imagine that the community was forced to leave them in the well, and that it was guarded to make sure no one removed the bodies for a proper burial.
I wonder, after centuries and centuries, why the BBC has to talk about money-lending, trying to find a "reason" for the persecution, attempting to excuse the persecutors--even after all these years.
Disgusting.
Finally, and most importantly, I wonder when this poor family will be buried in a proper Jewish grave, when we can lay them to rest.
I think the bones have been "studied" enough, don't you?  Must the pain and anguish of their last moments be on display forever?
These are not "archeological relics," they are the bones of Jewish people who now, after so many centuries, deserve the respect of a grave.
M
-----
Jewish bodies found in medieval well in Norwich
http://www.bbc.co.uk/news/uk-13855238

The  remains of 17 bodies found at the bottom of a medieval well in England could have been victims of persecution, new evidence has suggested.

The most likely explanation is that those down the well were Jewish and were probably murdered or forced to commit suicide, according  to scientists who used a combination of DNA analysis, carbon dating and  bone chemical studies in their investigation.

The skeletons date back to the 12th or 13th Centuries at a time when Jewish people were facing persecution throughout Europe.

They were discovered in 2004 during an excavation of a site in the centre of Norwich, ahead of construction of the Chapelfield Shopping Centre. The remains were put into storage and have only recently been the subject of investigation.

Seven skeletons were successfully tested and five of them had  a DNA sequence suggesting they were likely to be members of a single Jewish family.

DNA expert Dr Ian Barnes, who carried out the tests, said: "This is a really unusual situation for us. This is a unique set of data  that we have been able to get for these individuals.

"I am not aware that this has been done before - that we have  been able to pin them down to this level of specificity of the ethnic group that they seem to come from."

The team has been led by forensic anthropologist Professor Sue  Black, of the University of Dundee's Centre for Anthropology and Human Identification.

Professor Black, who went to the Balkans following the Kosovo war - where her job was to piece together the bodies of massacred Kosovan Albanians - said this discovery had changed the direction of the whole investigation.

Eleven of the 17 skeletons were those of children aged between two and 15. The remaining six were adult men and women.

"In terms of the brutality of the ethnic cleansing, it was thought women and children quite frankly weren't worth wasting the bullets on," added Professor Black.

Pictures taken at the time of excavation suggested the bodies were thrown down the well together, head first.

A close examination of the adult bones showed fractures caused by the impact of hitting the bottom of the  well. But the same damage was not seen on the children's bones, suggesting they were thrown in after the adults who cushioned the fall of their bodies.

The team had earlier considered the possibility of death by disease but the bone examination also showed no evidence of diseases such as leprosy or tuberculosis.

Giles Emery, the archaeologist who led the original excavation, said at first he thought it might have been a plague burial,  but carbon dating had shown that to be impossible as the plague came much later.

And historians pointed out that even during times of plague when mass graves were used, bodies were buried in an ordered way with respect and religious rites.

Norwich had been home to a thriving Jewish community since 1135 and many lived near the well site. But there are records of persecution of Jews in medieval England including in Norwich (see fact box).

Sophie Cabot, an archaeologist and expert on Norwich's Jewish  history, said the Jewish people had been invited to England by the King  to lend money because at the time, the Christian interpretation of the bible did not allow Christians to lend money and charge interest. It was  regarded as a sin.

So cash finance for big projects came from the Jewish community and some became very wealthy - which in turn, caused friction.

"There is a resentment of the fact that Jews are making money... and they are doing it in a way that doesn't involve physical labour, things that are necessarily recognised as work... like people feel about bankers now," said Ms Cabot.

The findings of the investigation represented a sad day for Norwich.