A Letter to a Friend and Hero 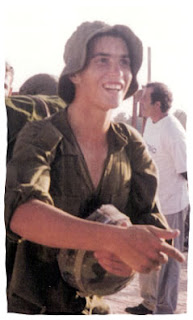 B"H
On the afternoon of this terrorist attack, I was in Israel.  In fact, I was at the Yeshivat Otniel, the Yeshiva that was attacked.
I was with a group from Betar/ZOA, and we had stopped our bus at the Yeshiva to pick up some of the students who wanted to spend Shabbat with us in Safed.
Those were the lucky few students from that Yeshiva who didn't experience the terror of that evening.
We heard at the time that Noam Apter not only locked the door, but he then threw the keys behind the hot commercial stove where no one could retrieve them--protecting his friends in the dining room.


Four young men died that night--but if it weren't for him, twenty or thirty or more might have been killed.
My memory of Israel is carefully inlaid with the powerful images of the Shiva of this young man and his friends.  We went to as many of the Shivas as we could to show our respect for these heros.  The families were distraught, but they were also strong and forthright.  Their sons--all religious, all Zionist, all learning to be soldiers--had not died in vain.  They had made the ultimate sacrifice protecting their classmates and friends from terrorists.
It is my honor to print this letter.

Letter From a Friend to a Fallen Hero

Noam Apter, 23, a student in Yeshivat Otniel on leave from the army, was murdered by Palestinian terrorists on a winter Sabbath night in late 2002, together with three of his friends. The four were caught in the kitchen of the yeshiva’s dining room on kitchen duty, and Noam heroically locked the dining room door in order to save his dozens of friends eating the Sabbath meal.

The terrorists were unable to open the door separating them from the other students, though they kicked, banged, and shot at it. "I do not know how to explain that a person closes himself up inside [to save his friends], knowing that he will die," said one of the yeshiva staff afterwards.

In  honor of Memorial Day, his friend Avishai Mizrachi wrote the following letter, published in Hebrew on the Kipa.co.il Judaism site.

You  would certainly be amused if you knew that I was writing about you. Your smile still appears to me from every direction; you had good-natured eyes, with a spark of mischievousness playing about them. If those accursed terrorists only knew how much innocence and softness they were taking… And the bullets that perforated your body and mercilessly splashed your blood to the ground – if they would have received a soul for just a moment, they would likely have turned themselves away from the range of your death.

…What did you think  to yourself there? Tell me, what were you thinking when you locked the doors of the kitchen and closed yourself and your life up and exposed your body to the terrorist fire, and saved tens, tens of your friends? From where did you get the strength, the daring?

For we were together in the same room in Kfar HaRoeh [yeshiva high school], six of us, on three bunk-beds in a crowded room. We laughed so much together, and hiked, and talked about profound things deep into the night. You would always return from Shabbat in your parents’ home with new insights, with interesting thoughts. How did you suddenly turn into a hero? Into a photo in the newspaper? Into words engraved on a tombstone?

And  that dark, stark night, the end of the holy Sabbath. Whispers of rumors  were heard that there had been an attack in Otniel. I prayed so much that you were not there – but my prayers went unanswered. I traveled from Kiryat Shmonah [in the north] down to the cemetery in Shilo for your funeral, a long night with tears flooding my eyes. To see your friends in the army, with red berets, paratroopers’ wings, carrying your  coffin in silence. I searched all around for your smile, I so much wanted to hear your rolling laughter. And your father humming next to you a last Sabbath song with tearing eyes, “He who keeps the Sabbath, the son and the daughter, will be pleasing to G-d like a [Holy Temple] skillet offering.”

…Noam, the world did not stop, even after your  death. Its heart is still beating wildly, and did not stop even upon hearing your last dying gasps. People here, in this world, love life and  repress the finality that awaits us, the death that is waiting to come upon us. And you, you are most certainly enjoying yourself there among the angels and seraphim in that other world, the eternal world, the one that is hidden from the eyes of all thinkers.