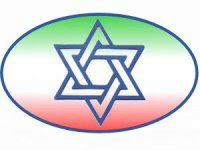 B"H
This is a horrible tragedy for their friends, their family, and the community at large.  There is nothing that replaces the hole in one's heart when they lose a loved-one.  Each family has lost two children.  The Khalili family lost a daughter several years ago, and now a son.  The Moussazadeh family loses two young men.
May Hashm comfort these families, and may they see justice in the months to come.
M
-----
Three Iranian Jewish men murdered in West Hollywood
http://www.jewishjournal.com/iranianamericanjews/item/three_iranian_jewish_men_murdered_in_west_hollywood_39100829
Posted by Karmel Melamed
According to a Los Angeles County Sheriff’s report, on the evening of  August 26th three men, now identified as local Iranian Jews, were found  murdered inside their apartment located on the 600 block of North Kings Road in West Hollywood.
The victims, who were found by Sheriff’s deputies shot to death, were  identified as Pirooz Moussazadeh, 27; his brother, Shahriar Moussazadeh, 38; and Bernard Khalili, 27, said Craig Harvey, chief of investigations for the Los Angeles County coroner’s office.
According to a Sheriff’s department report, deputies arrived at the West Hollywood apartment a little after 9 pm following 9-1-1 calls from neighbors who had reported hearing a series of gunshots. Sheriff’s officials have told local media that there were no weapons, no drugs and  no signs of forced entry inside the victims’ apartment.
L.A. County Sheriffs have not released additional information regarding the case as an investigation is underway.
Dara Abaei <http://www.jewishjournal.com/iranianamericanjews/item/abaei_is_one_of_the_iranian_jewish_unsung_heros/> , an Iranian Jewish community activist and head of the Pico-Robertson based Jewish Unity Network <http://www.lajun.com> , said local Iranian Jews he’s been talking to have expressed shocked and fear after hearing the news of the murders.
“Both young people and parents in the community are very upset. I don’t think we as a community have had such a major incident of deaths like this in 25 years— the last one I can remember was in Iran when three Jewish men were killed in a car accident,” said Abaei. “My message  to everyone has been to keep calm and not to rush to any kind of judgment”.
Since the murders, local Iranian Jewish leaders, including Nessah Synagogue <http://www.nessah.org> ’s Rabbi David Shofet have been cautioning community members to refrain from gossiping about the case or spreading rumors.
“Before his sermon this Saturday, Rav David briefly said something that I agree with fully— that we do not know what has happened and therefore it’s not wise for anyone one of us to make speculations or pass judgment,” said Mehdi Soroudi, president of the Iranian Nessah Synagogue in Beverly Hills. “We have to allow the proper authorities to proceed with their investigation”.
Abaei confirmed that the victim Bernard Khalili, in this case, was the brother of Iranian Jewish Beverly Hills High School senior, Bianca Khalili <http://www.jewishjournal.com/los_angeles/article/iranian_jews_grapple_with_tragic_death_and_violence_in_the_community_200806/> ,  who in 2008 fell from a Century City high-rise. Los Angeles Police authorities later ruled Bianca Khalili’s death a suicide amidst local community rumors of foul play.
“This is obviously a tragedy for the Khalili family and they have refused to talk to anyone—they’re very shocked and upset,” said Abaei.
This current case is not the first of its kind involving violence among local Iranian Jews. In February 2008 I reported on the Hakim brothers’ case <http://www.jewishjournal.com/community_briefs/article/1_million_warrant_issued_for_iranian_jewish_man_wanted_for_attempted_murder/> ,  in which one Beverly Hills Iranian Jewish man allegedly shot and then paralyzed his own brother in a dispute. Eventually the man, 49-year-old Alfred Hakim, was arrested and charged with attempted murder. Hakim later jumped bail and a $1 million warrent was issued for his arrest in October 2009. Hakim has since not been located.
Dr. Kamran Beroukhim, chairman of the West Hollywood-based Iranian American Jewish Federation <http://www.iajf.org/> , declined to comment on the case stating that he is currently involved with helping the victim’s families.
Posted by Unknown at 2:41 AM