Too Bad, So Sad--Israel Isn't Obligated To Any Agreements: The Facts Have Changed, The Agreements Weren't Ratified, and They have ALL Expired! 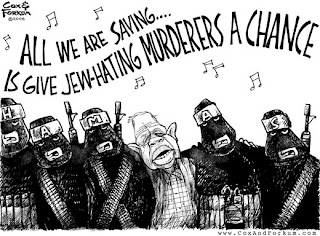 The US wants to hold Israel to “previous agreements” regarding the arabs, but there is a serious problem with that request.

Tell me, how exactly does a “two state” solution work when we are discussing three parties? I know how it works for the murdering arabs—the “two states” are Fatah and Hamas, and Israel disappears.

Let’s be serious, that’s the only “two state” solution that these murdering arabs will be happy with.


Second, the “previous agreements” were not ratified by the Knesset. They were randomly agreed upon by one rogue and completely corrupt politician (Olmert) and his equally corrupt replacement (Livni).

Because these “previous agreements” were never agreed upon, we can’t be held to them.

Third, the murdering arabs have NEVER kept their side of the bargain in any way, shape, or form! Can you recall when they stopped being aggressive, participating in incitement, stopped teaching hate of Jews in their schools, stopped publishing anti-Jewish messages in their newspapers or broadcasting them on the television? Can you recall when they stopped destroying our holy sites, stopped threatening our citizens who travel to those sites, or stopped building on our land?

They have done NOTHING, and the deadlines for doing something have LONG expired.

What I am trying to say is: WE ARE NOT OBLIGATED ONE BIT.

Israel will 'maintain demands' on identity as Jewish state and importance of security, know the US will focus on settlement issue, officials say

Prime Minister Benjamin Netanyahu landed in Washington Sunday afternoon a day prior to a meeting with US President Barack Obama. The atmosphere among the prime minister's associates was tense on the trans-Atlantic flight.

Although they expect a warm reception, senior Israeli officials have no doubt that the United States intends to press them hard on the topic of Israeli-Palestinian negotiations in general and on the issue of settlements, specifically.

"We think that the Israeli stance is clear," said one official from Netanyahu's entourage. "Israel will maintain its demands regarding its identity as a Jewish state, the importance of its security and its fear of having another army to deal with west of Jordan."

He added that "we expect a number of meetings and also expect understanding and agreement on core issues."

Netanyahu plans to tell Obama that the primary threat to the two-state solution currently is Iran and suggest a number of solutions meant to promote dialogue between Israelis and Palestinians.

His solutions are based on the idea of creating American-Israeli teams to address security concerns and draft policy vis-à-vis the Palestinians and Arab nations.

American officials tried to display a softened demeanor ahead of their meeting with Netanyahu. One official stressed that there was no intention of creating hostilities, but that the topic of Israel's commitment to previous agreements and particularly to a settlement freeze would be a primary issue.
Posted by Unknown at 6:20 AM