Well, here's one example about why military intel is so very very important in this war.

I'm sure if this has been released for publication, that it has already served its purpose in protecting our IDF troops and wiping the floor with the Hamas terrorists.

I am hoping that Hashm will provide many more opportunities for our victory. Meanwhile, I think G-d this map fell into our hands. I can't imagine how many IDF lives this map saved--and how many it might save in the future, as they probably have the same proceedures for boobytrapping other areas in Gaza.

It also is good evidence of how Hamas uses the civilian population and their homes in order to wage war. It is good evidence to prove Israel's case--not only to the international community, but to the arabs themselves. 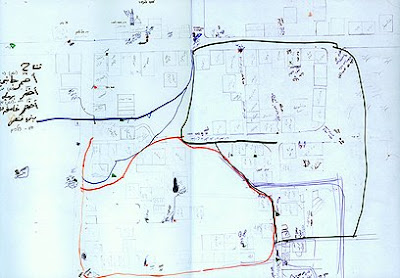 A map depicting Hamas' best-laid plans on how to hurt IDF soldiers in Gaza was discovered by paratroopers in al-Atatra neighborhood Thursday. The map was translated on the scene and helped the troops in subsequent operations.

Chief IDF Intelligence Officer Brigadier-General Yuval Halamish explained that Hamas had divided the neighborhood into a number of areas distinguished by landmarks such as mosques, gas stations, and fuel depots.

Map found by paratroopers
"You can see that the neighborhood was divided into three areas of fighting, according to color, and inside the terrorists spread out a number of posts, planted explosive devices, and posted sharpshooters," he said.

"Hamas makes cynical use of civilian homes, the entrances of which were booby-trapped in order to hurt IDF soldiers." Explosive devices were also planted near gas stations despite the immediate danger to civilians, Halamish added. He said the layout had been thoroughly planned in preparation for a ground operation.

The map consists of precise drawings of all homes in the neighborhood as well as a color-coded key drawn in the top left-hand corner, which describes the type of explosive device planted at each site. Sharpshooters' stations were also marked.

Halamish also described Hamas' use of dolls in order to attract the attention of soldiers, and presented a picture of a doll placed at the entrance to a home. He said the doll was intended to draw soldiers to it so that an attack could be executed, following which the terrorists could kidnap their victims.
Posted by Unknown at 10:31 AM