May Hashm comfort the families of these brave men. May Hashm protect the injured.

May Hashm comfort and sooth the men who in the tank. May they know that their lives are worthy, that the situation was out of their hands, that the fog of war is dense and paralyzing, and that they must go on.

(IsraelNN.com) Four IDF soldiers were killed on Monday in two separate incidents of friendly fire during ground operations, according to the IDF Spokesperson's Unit.

In one incident, a member of an elite paratroopers unit, was reportedly killed when a stray IDF mortar shell struck in the area where his unit was operation in northern Gaza near Beit Hanoun. Three other soldiers were killed on Monday evening by a shell from an IDF tank. The incident took place at approximately 6:00 p.m., and was released for publication early on Tuesday morning.

Corporal Yousuf Muadi, 19, of Haifa will be laid to rest in the Bircha cemtery at the Galilee Druze village of Yerka at 3:00 p.m. Corporal Muadi was a member of the Golani's Battalion 13.

The funeral for Golani Brigade physician Major Dr. Dagan Wurtman, 32, from the 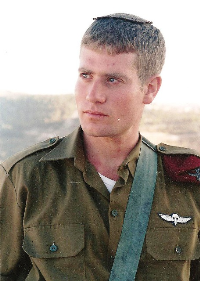 Samaria town of Maale Michmas will be held on Tuesday at 15:30 in Har Herzl Military Cemetery.

Details of the funeral for Deputy Company Commander Captain Yonatan Netanel (right), 27, from Kedumim, have not yet been announced. Netanel studied in the Merkaz Harav Yeshiva High School, where eight students were murdered in an Arab terrorist attack in March.

He continued his studies in the pre-military yeshiva academy in Eli for three years. He enlisted in the Israeli paratroopers, got married to Tziyona, and the couple had their first baby girl three months ago. Netanel's parents and family live in Jerusalem.

First-Sergeant Nitai Stern, 21, of Jerusalem will be laid to rest at 13:30 in the Mt. Herzl Military Cemetery.

According to the findings of an initial investigation, the three Golani soldiers were part of a large group that had taken refuge in a building at the edge of the city of Jebaliya during heavy fighting in Gaza. The group had been targeted by mortar shells fired by Hamas.

After a short time a loud explosion was heard and the building the soldiers had entered began to collapse. While soldiers initially believed the building may have been rigged with bombs or hit by an anti-tank round fired by Hamas, further investigation showed the blast was caused by the misfired tank round.

A soldier was critically wounded in the accident and three were seriously wounded. Another 20 were lightly or moderately wounded.

The wounded received initial first aid at the scene and were removed by ambulances and helicopters. Tank units provided cover, keeping Hamas terrorists away from the scene until the soldiers had all been taken out for treatment.

One of the wounded was identified as Golani Brigade Colonel Avi Peled. Peled was lightly wounded, but refused to be taken from the scene and instead stayed to direct rescue efforts.
Posted by Unknown at 6:10 AM