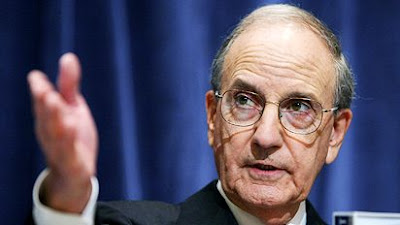 Mitchell, whose 1998 "Good Friday Agreement" has lead to peace between Catholics and Protestants in Northern Ireland, says he saw during his work as envoy there that even a conflict that dates hundreds of years can be resolved. He acknowledged that he'll be facing a "volatile, complex and dangerous" conflict — one that has become so entrenched, it's seen by many as unchangeable.

Mitchell is a Maronite Christian whose mother, Mary Saad, was a textile worker who immigrated to the United States from Lebanon at the age of eighteen.
-----

George Mitchell is the main author of the Mitchell Report , that lead to the failed policies of expulsion that lead up to the present-day war in Israel.

The Mitchell Report is morally vague at best--refusing to recognize the PA as the aggressors during a terrorist war against Israel. It was the worst type of moral bankruptcy. Mitchell is wedded to the idea of "negotiations" to end the problems that Israel has with Hamas--but the problem is that while we are negotiating, they are rebuilding an army to destroy us.

In the Mitchell Report, the idea that the following recommendations were made for "Peace" in the Middle East:

The GOI and the PA must act swiftly and decisively to halt the violence. Their immediate objectives then should be to rebuild confidence and resume negotiations.

· The GOI and the PA should reaffirm their commitment to existing agreements and undertakings and should immediately implement an unconditional cessation of violence.

· The GOI and PA should immediately resume security cooperation.

Effective bilateral cooperation aimed at preventing violence will encourage the resumption of negotiations… We believe that the security cooperation cannot long be sustained if meaningful negotiations are unreasonably deferred, if security measures "on the ground" are seen as hostile, or if steps are taken that are perceived as provocative or as prejudicing the outcome of negotiations.

· The PA and GOI should work together to establish a meaningful "cooling off period" and implement additional confidence building measures.

· The PA and GOI should resume their efforts to identify, condemn and discourage incitement in all its forms.

· The PA should make clear through concrete action to Palestinians and Israelis alike that terrorism is reprehensible and unacceptable, and that the PA will make a 100 percent effort to prevent terrorist operations and to punish perpetrators. This effort should include immediate steps to apprehend and incarcerate terrorists operating within the PA's jurisdiction.

* The GOI should give careful consideration to whether settlements which are focal points for substantial friction are valuable bargaining chips for future negotiations or provocations likely to preclude the onset of productive talks.

* The GOI may wish to make it clear to the PA that a future peace would pose no threat to the territorial contiguity of a Palestinian State to be established in the West Bank and the Gaza Strip.

· The IDF should consider withdrawing to positions held before September 28, 2000 which will reduce the number of friction points and the potential for violent confrontations.

· The GOI should ensure that the IDF adopt and enforce policies and procedures encouraging non-lethal responses to unarmed demonstrators, with a view to minimizing casualties and friction between the two communities.

· The GOI should lift closures, transfer to the PA all tax revenues owed, and permit Palestinians who had been employed in Israel to return to their jobs; and should ensure that security forces and settlers refrain from the destruction of homes and roads, as well as trees and other agricultural property in Palestinian areas.

· The PA should renew cooperation with Israeli security agencies to ensure, to the maximum extent possible, that Palestinian workers employed within Israel are fully vetted and free of connections to organizations and individuals engaged in terrorism.

· The PA should prevent gunmen from using Palestinian populated areas to fire upon Israeli populated areas and IDF positions. This tactic places civilians on both sides at unnecessary risk.

· The GOI and IDF should adopt and enforce policies and procedures designed to ensure that the response to any gunfire emanating from Palestinian civilians, bearing in mind that it is probably the objective of the gunmen to elicit an excessive IDF response.

· We reiterate our belief that a 100 percent effort to stop the violence, an immediate resumption of security cooperation and an exchange of confidence building measures are all important for the resumption of negotiations. Yet none of these steps will long be sustained absent a return to serious negotiations.

It is not within our mandate to prescribe the venue, the basis or the agenda of negotiations. However, in order to provide an effective political context for practical cooperation between the parties, negotiations must not be unreasonably deferred and they must, in our view, manifest a spirit of compromise, reconciliation and partnership, notwithstanding the events of the past seven months.

Suleyman Demirel
9th President of the Republic of Turkey

Warren B. Rudman
Former Member of the United States Senate

The biggest problem, for me, with the Mitchell report is that it emphasizes religiously significant issues on the side of the arabs, but it never mentions religiously significant issues on the side of the Jews--other than protecting "Holy Sites" (which, by the way, were never protected. All you have to do is look at the rape of our Temple Mount by the builders of the mosque there, on a daily basis; and the horrible desicration of the grave of Joseph to see what the "negotiations" mean to the arabs.

Also, the Mitchell report posited the idea of disallowing even natural growth of "settlement" (read Judea and Sumaria) communities in Israel. This is a proposterous idea, especially considering the birth rate among Jewish citizens of Judea and Samaria.

I think George Mitchell has theoretical ideas that work in the universe between his ears, but never work in the real world.

President Barack Obama will move quickly to name a Middle East envoy and is strongly considering former Sen. George Mitchell for the job, sources familiar with the matter said Tuesday.

The naming of the veteran international troubleshooter to the role would signal that Obama was serious about carrying out his campaign pledge to engage early in his administration on the Middle East issue, analysts said.

"This is a tremendous signal of (Obama's) desire to nail down once and for all a Palestinian-Israeli peace," said Gregory Orfalea, who teaches Arab-American history at Georgetown University.

If he gets the job, Mitchell's first challenge would be dealing with the crisis in Gaza, where Israeli troops are withdrawing after a 22-day offensive.

Mitchell's 2001 report on the Israelis and Palestinians called for Israel to freeze construction of new settlements and to stop shooting at unarmed demonstrators, and Palestinians to prevent attacks and punish those who perpetrated them.
Posted by Unknown at 11:02 AM