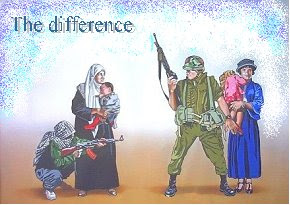 This is why the "poor Palestinians" don't have any food in Gaza--because their "leaders" are stealing it and selling it to the highest bidder.

Here is an excellent example of why Hamas needs to go and why Israel should be considered the protector of the women and children of Gaza--not these terrorist bastards who hide behind innocent people in order to perpetrate their war against Israel.

Even Fatah, Egypt, and Jordan have expressed shock at the stupidity and evil expressed in the actions of Hamas--but no one will hear them. People are so absorbed with the idea that Israel is evil and bad that they have blocked their ears and covered their eyes in order not to see the truth.

This is a sick, sick world--but no different than it ever was.

Hamas on Monday raided some 100 aid trucks that Israel had allowed into Gaza, stole their contents and sold them to the highest bidders.

The IDF said that since terminal activity is coordinated with UNRWA and the Red Cross, Israel could do nothing to prevent such raids, Israel Radio reported.

Between 10 a.m. to 1 p.m., the army had ceased all military activity in Gaza and once again established a "humanitarian corridor" to help facilitate the transfer of the supplies.

The Kerem Shalom and Karni crossings had been opened to allow in the aid trucks.

Defense Minister Ehud Barak has forbidden the entry of electronics to Gaza since the goods do not fall under the category of humanitarian aid. Some electronic equipment has been let in as per an official Palestinian request, such as equipment used to repair the damaged electrical grid in Gaza.

Meanwhile, Israel is considering establishing a field hospital in the Gaza Strip to treat Palestinian civilians wounded in fighting between the IDF and Hamas.

The plan would be to establish the field hospital outside the Gaza Strip, but the IDF is also considering the possibility of erecting the hospital inside the Palestinian territory so it will be more accessible to the Palestinian population. It would be run by the IDF Medical Corps.

Also Monday, in an effort to promote Israeli humanitarian efforts in the Gaza Strip, the Defense Ministry launched a new Web site that provides a live video feed of the Kerem Shalom cargo crossing, through which international organizations have been transferring basic foods and medical supplies to Gaza.

The footage can be viewed at: http://www.mod.gov.il/pages/general/Maavar-Kerem-Shalom.asp. Since the beginning of Operation Cast Lead, the IDF has facilitated the transfer of close to 900 trucks into the Gaza Strip with over 20,000 tons of basic foods and medical supplies.

According to an army estimate on Monday, slightly over 900 Palestinians have been killed since Operation Cast Lead began in December 2008. Based on intelligence and information obtained by the Gaza Coordination and Liaison Administration, the IDF has determined that at least 400 of those killed are known Hamas operatives. The IDF further believes that among the remaining 500, a significant number are also Hamas operatives.
Posted by Unknown at 7:27 PM