Welcome Terrorist Sympathizers from Haloscan! I know you are here to see my treacherous Jewishness exposed, but as you will notice, I am speaking out against TERRORISTS, not "Palestinians." It is YOUR choice to believe they are one-in-the-same.

What does that say about YOU?

Enjoy! I haven't changed a thing in my post but this welcome. I have nothing to hide.

I hope your homeland security services are watching your list. I'm sure they are! After all, it wasn't hard for me to find you.

P.S. Oh, and by the way, thanks for coming! Every hit on my blog is more popularity for me in the Google searches and more exposure for my blog. You are wonderful, really. Thanks.
-----
B”H

Yeah. These fanatical wackos, coming out of the wallboards now to attack inside Jerusalem, on the road, in our homes and even on the internet are really going to convince us to give them a state—especially next to us.

All I can say about their threats is this: one more reason to kill every single one of them. No one who has any allegiance to Hamas can be trusted, ever. As Torah says in Numbers 33:50-57,

It's us or them, it always has been. Every death that Israel endures is because we have not listened to Hashm and abided by the law as set down in Torah. That includes every inch of the land that Israel is promised, and, in case you have forgotten what that is (and have listened to too much rhetoric from the "poor arabs" and the bleeding-heart liberal no-religion anti-Jews) this is what G-d gave us as an inheritance for our people. We must possess it and drive all others from that land in order for there to be peace: 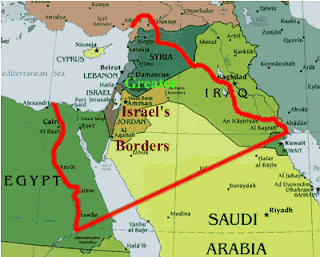 I’m just sorry our stupid government had to wait until the terrorists had amassed so much weaponry and had time for so much training before we returned to take what is rightfully ours. That foot dragging by Kadima may cause the deaths of hundreds, if not thousands, of innocent Jews.

A 1-ton Israeli bomb took out a fanatical Hamas chieftain yesterday, a day after he vowed to launch terrorist rockets "even deeper" into Israel.

Nizar Rayyan, 49, was the highest-ranking terrorist killed by Israel in four years and the first of Hamas' five senior officials to die in the six-day Gaza Strip offensive.

He was holed up in a four-story building in Jabaliya when the blast killed him along with all four of his wives, nine of his children and two others, Palestinian sources said.

Rayyan had repeatedly called for suicide-bomb attacks inside Israel, and sent his own son to carry out a suicide bombing in 2001 that killed two Israelis. He was both a military commander and the spiritual leader of Hamas' brutal military wing.

Hamas vowed revenge. "The blood of Sheik Nizar Rayyan and the blood of other martyrs will never be wasted, and the enemy will pay a heavy price for crimes it committed," said Hamas official Ayman Taha.

Israeli officials said Rayyan, who was in charge of Hamas' weapons production, had used the building as an arsenal and had built a tunnel under it to use as an escape route. They said his family had been warned of the impending airstrike, but stayed.

Israelis said the attack on Rayyan's house triggered secondary explosions from the arms stockpiled there. Mounds of debris thrown up by the blast buried cars.

Rayyan was one of several Hamas members on Israel's death list. "We are trying to hit everybody who is a leader of the organization, and today we hit one of their leaders," Vice Premier Haim Ramon said.

The air raid raised the Palestinian death toll to over 400 since the offensive began Saturday, and came as Israel repeated that it was rejecting a cease-fire called for by France.

"There is no humanitarian crisis in the strip, and, therefore, there is no need for a humanitarian truce," Israeli Foreign Minister Tzipi Livni said in Paris. "Israel has been supplying comprehensive humanitarian aid to the strip . . . and has even been stepping this up by the day."

Other Israeli officials said they would welcome a truce if there were an international monitoring force in Gaza to ensure that rocket attacks on Israel - the reason for the offensive in the first place - were stopped.

Hamas has acquired dozens of Iranian-made Fajr-3 missiles, which have a longer range than its homemade Qassam rockets.

Many Israeli officials fear that as the terrorist group acquires ever more sophisticated weaponry it is only a matter of time before the nuclear installation at Dimona, 20 miles east of Beersheba, falls within its sights, The Times of London reported.

Dimona houses Israel's only nuclear reactor and is believed to be where atomic warheads are stored.

More than 40 more rockets fired from Gaza hit southern Israel yesterday, including one that destroyed the top floor of an eight-story apartment building in Ashdod. The building's residents reached bomb shelters in time, and there were no casualties reported.
Posted by Unknown at 6:22 AM