"Can anyone imagine the German police going into a private home to remove a Hamas flag?" 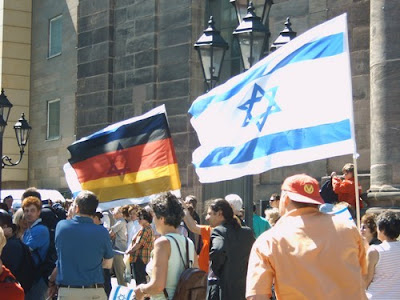 “The Baron was one of the most powerful lords in Westphalia, for
his castle had not only a gate, but even windows . . . “
--Voltaire Candide

In the 1700s, Westphalia needed Voltaire in order to make a satire, but in 2009, Westphalia is making a satire of itself!

What could they be thinking? Aren’t the Germans just a little bit skittish about their past, just a bit embarrassed, just a bit more concerned about appearing anti-Jewish than most of the other European nations—yet, here they are, banning the Israeli flag in order to placate the violence of an arab mob?

This is significant because it shows the compartmentalization of European hate. They can feel shame about what they have done to the Jews, but feel perfectly comfortable banning references to Israel. They seem to think that they can sublimate their anti-Semitic feelings into feelings for Israel—but they are really the same thing. Instead of hating the individual Jew, instead of hating the individual Jewish institutions, they can hate an entire nation of Jews and call it “protection” of the Jewish occupants of the apartment building???

As Dr. Zuroff so elequently puts it in this article, "This type of response will only encourage more aggressive and violent behavior by anti-Israel demonstrators and send the message that in Germany, Jews and supporters of Israel do not enjoy the full protection of the law."

What happened to the German idea of societal orderliness? Where are their important concepts of civil rights now? It appears that the mob rules in Germany, and it won’t be long before the problems of France, with rioting of arab youth in the street, becomes de rigeur in Germany as well.

Remember Germany welcoming all the Jews back, trying to get them to repopulate the country? Well, thank G-d few Jews fell for that! Europe is no longer a country of Europeans. Their birthrates have dropped dramatically, they have been absorbing a huge number of arabs, and the countries of Europe will soon find themselves living under Shariah Law.

German police officials in the cities of Duisburg and Düsseldorf, located in the state of North Rhine-Westphalia, prohibited pro-Israeli supporters from displaying Israeli flags.

During an anti-Israeli demonstration organized by the radical Islamic group, Milli Görüs, which attracted 10,000 protesters last Saturday in Duisburg, two police officers stormed the apartment of a 25-year-old student and his 26-year-old girlfriend and seized Israeli flags hanging on the balcony and inside a window.

The hostile crowd pelted stones and other objects at the flags.

A video that appears on YouTube shows an angry crowd in front of the apartment house and the police forcibly seizing the Israeli flags. The confiscation of the flags was greeted by cheers from the anti-Israeli protesters.

The student told the online magazine Spiegel that he wanted to show "solidarity with the sole democracy in the region," and complained about societal indifference in Germany toward Hamas rocket attacks on Israel.

"Can anyone imagine the German police going into a private home to remove a Hamas flag?" Dr. Efraim Zuroff, director of the Simon Wiesenthal Center in Jerusalem, said in a statement.

"This type of response will only encourage more aggressive and violent behavior by anti-Israel demonstrators and send the message that in Germany, Jews and supporters of Israel do not enjoy the full protection of the law," he said.

Responding to Zuroff's criticism of the police conduct as "cowardly" and "incomprehensible" as well as to the outrage of the Central Council of Jews in Germany, Duisburg Police Chief Rolf Cebin posted a statement on the police Web site on Wednesday, saying "I deeply regret that feelings, especially those of our Jewish fellow citizens, were hurt.

"The removal of the flags was, as we see it today, the wrong decision," Cebin said. "The situation was very heated and the officers wanted to avert harm to the participants, including the residents of the apartment. They acted with the best of intentions in a tricky situation, under considerable time pressure, in order, from their point of view, to prevent an escalation."

When asked if the Duisburg police plan to confiscate Israeli flags from supporters who demonstrate against an anti-Israeli protest slated for this coming Saturday, Ramon van der Maat, a Duisburg police spokesman, told The Jerusalem Post that, "we have to see what is expected" at the protest, adding, "It depends on the situation and one cannot, across the board" say that Israeli flags will be permitted.

The Düsseldorf flag ban occurred during a demonstration earlier this month. The flag-wavers were taken into police custody.

Meanwhile, anti-Semitic violence directed at Jewish institutions is spreading across Germany. A Palestinian man assaulted a police employee Wednesday with an iron bar, as the latter was guarding a synagogue in the district of Mitte in Berlin. According to media reports, the attack is linked to Israel's Gaza operation.

In the northeastern city of Rostock, police are investigating attacks on a Jewish community center which serves the small community of 1,000.

Assailants threw rocks at the windows of the center more than a week ago and a crossed-out Star of David was daubed on the building a week before that.
Posted by Unknown at 6:06 AM