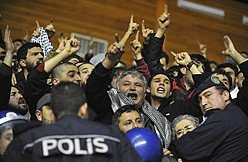 The truth is that Turkey is not the secular country we have come to know and love. The new government is Islamic, the people are becoming increasingly radicalized, and the country is swiftly moving in the same direction as her neighboring arab states.

Israel has come to count upon Turkey as a moderate partner for peace, but I'm not sure how much longer that will be the case. This is not the first example of the increasingly anti-Israel sentiments in Turkey, and I'm sure, unfortunately, that it will not be the last.

Moments before the tip-off of the Israeli team's Eurocup encounter against Turk Telekom some 3,000 Turkish fans shouted 'Allah Akbar' and, by some accounts, 'death to the Jews' in protest against the IDF's actions in Gaza.

Other fans threw bottles at the Israeli players and stormed the court, forcing the Israelis to flee for the dressing rooms.

The players and staff were only able to leave for their hotel thanks to a massive police escort after being stranded for two long hours in the locker room.

"We arrived at the arena under heavy security. There were 1,500 policemen in the arena, 500 of them in plain clothes. The fans waved Palestinian flags and shouted abuse towards Israel," Akunis said.

"As the game was set to begin they stormed the court and we raced towards the dressing rooms. Our players are in shock and all we want at the moment is to return back home."

Team captain Meir Tapiro said only the police's intervention prevented the players from being attacked.

"The fans raced on to the court and ran towards us like madmen, but the police stopped them. It was really scary," he said.

Amazingly, the game referee demanded that Bnei Hasharon play after all the supporters were cleared from the arena, but the team refused and is set to receive a technical loss.

"After a delay due to on-court disturbances before the game, the Turk Telekom vs Bnei Hasharon game was not played due to Bnei´s refusal to play despite clearing the arena of fans," a ULEB press release read.

"The situation will be reviewed by the disciplinary judge to give the final ruling. Under league rules the refusal to play a game by a team can be sanctioned and the game can be given to the opposing team 20-0."

Earlier, a pro-Islamic group earlier set an Israeli flag on fire outside the arena.

Turkey has harshly criticized Israel over the ground offensive in Gaza and has urged an immediate cease-fire. It has also called on the United Nations to take steps to end the violence.

AP contributed to this report.
Posted by Unknown at 9:16 AM