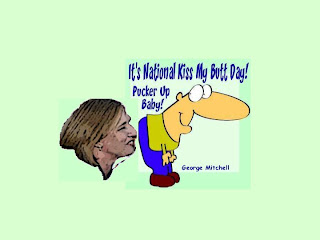 What the heck does Israel mean to achieve by holding on to this fake “cease fire” that we all know is really a Hudna??

Seriously, does Olmert and Livni think that somehow this time of rearmament will, in some way, help Kadima win the election?

And, of course, Livni is expecting a boost from some sort of Obama support, I’m sure—especially since she tried to trot out the “Obama card” right after the elections, suggesting that the US would deny its support to any government of Israel that isn’t going to support the “peace” plan .

Excuse me, Madam, but it is Obama that needs to worry about getting support from the Jews and the Xtians, not the other way around. Unlike Israel, where the government representatives are elected from the party and do not reflect nor directly represent the people of Israel, America is a representative democracy and, because of that, Obama must be very careful what he does—especially when he got more that 60% of the Jewish vote. He is not going to abandon Israel, that would be political suicide on a massive scale.

In addition to that, all those democrats that won two years ago in congress have single-digit approval ratings from the American people. They are starting their re-election campaigns in the middle of this year, and they are going to need money to get re-elected. American Jews give a lot more than other groups, per-capita, especially to the Democrat Party (which I am still at a loss to understand). Those congress members, who are already facing long odds, would not risk their political futures by dropping Israel from their agenda.

So, my dear Livni, you are a liar. Obama is already on notice, with his approval ratings plunging more than 15 points after less than a week in office, and he will find that, in a short time, he will be completely unable to build support for his more extreme policies for which he needs congressional approval.

Let’s just hope that the new government in Israel can be strong enough to withstand Mitchell and his backward policies. Bibi says he won’t form a strong right-wing government (of course he won’t. Bibi doesn’t want anything but what’s good for Bibi, and a right-wing government could never be possible under his talk-tough-then-knuckel-under philosophy of governance), however, he may end up with one anyway if the Israeli people continue to see how weak and ineffectual Kadima has been and how they let continue to let Hamas destroy the lives of Jews in Southern Israel and threaten Tel Aviv.

How many thousands if rocket attacks must we sustain this time from Hamas before we go in and have to redo everything we just did and put the lives of Jewish soldiers in jeopardy? How many border attacks must we see? How many young soldiers must die at the hands of these terrorists? How many innocent people must live their lives in bomb shelters for this fake peace?

(IsraelNN.com) Leaders of major political parties were swift to swing political punches hours after Hamas killed one solider and wounded three others, one seriously, in a bombing of a patrol at the Gaza separation barrier. Hamas escalated the ceasefire violation with a mortar attack on the western Negev, causing no injuries or damage.

It also coincided with a visit by Defense Minister Ehud Barak to soldiers at the Tze'elim training center, near the scene of the attack. He called the fatal incident "serious" and threatened Hamas that "we will respond" but declined to spell out specific action or timing. "Those who don’t know how to defend themselves will not get a second chance," he commented.

Barak also took the opportunity to claim success in the Second Lebanon War. "In my estimation, we are on our way to a period that they [Hamas] will remember very well, like Hizbullah remembers the blow it absorbed in Lebanon two-and-a-half years ago," the Defense Minister added.

Foreign Minister Tzipi Livni, lagging behind the Likud in pre-election polls, asserted, "As I said before the Gaza offensive, if we are attacked we must strike back. The way we conduct ourselves after the operation is just as important... This is a test of actions, not just of rhetoric. Changing the equation has to do not only with what we've already done, but with what we will do next."

MK Yitzchak Aharonovitch of Israel Is Our Home (Yisrael Beiteinu) stated, "The incident at Kisufim is a result of a successful military operation that was ended before its time by a failed political decision without a clear victory being decided. The response needs to be serious, determined, and painful."
Posted by Unknown at 6:17 AM