No Ger Is Safe. Rabbi Yissachar Dov Hagar Cancels Conversion of Jewish Man, Living in Jerusalem, Converted as a Toddler 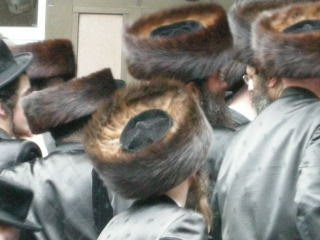 OK, this is just bazaar. Can someone please check under this man's fuzzy hat to see if he still has a head under there? Maybe the fuzzy hat lead to fuzzy logic? How, exactly, did this man get to be on the Rabbinate anyway?

More than bazaar, this is dangerous and terribly, terribly tragic. I am hoping against hope that the report is not true, but, as I heard about this last week when it was reported in the Hebrew press and discussed by Failed Messiah, I know that the conversion was "retroactively canceled"--whatever that is supposed to be.

The whole world is on its head, it appears. Now, there is just one type of Jew in the world, I guess. I always thought that once a Jew, always a Jew--the next thing is canceling the Judaism of born-Jews who aren't religious, right? I mean, if they haven't been dressing in funny costumes all their life and fearing any contact with the opposite gender, they are not Jews, right?

Oh! I forgot. The man from whom they just canceled the conversion dresses in funny costumes all the time. He is a Shakespearian actor--but I guess that isn't one of the allowed professions for Jews these days. That is what will come next.

And, of course, any women who might be educated; men who own colored shirts, and anyone who has ever read a dinosaur book (my apologies to my children whose toybox is full of T-Rex and Duckbill Dinosaur models, as I have put their Judiasm greatly in doubt, I fear).

That is all so much less important than what their bearded "Rebbe" has proclaimed, and everyone knows their "Rebbe" is much wiser than Hashm, right?

Please make sure there was never any breach of any kind at any time in his family. Is there someone from the Shteitel back in the old country who remembers his mother walking with a necklace on her neck on Shabbat, or who can remember that she tore the leaf off of a tree with her cloak as she walked down the street? What about his father? Maybe he, one time, forgot to straighten his Tefillin straps on his head. Remember, dear Rabbi Hagar, that Hashm judges you by the same criterion by which you judge others. I hope you are up to the task! I'm glad I am not a judge. Sincerely.

Oh, and while we are at it, cancel the conversion of Ruth please. I don't think I read anything about her Mikva or who served on the Beit Din. She just laid down on Boaz's feet and we are supposed to take her as a sincere convert?? And, of course, if we cancel her conversion, then David is not Jewish . . . and, it follows, that we have no Moschiac at all. I guess Rabbi Hagar has the answer as to why the Moschiac hasn't come yet--because Ruth was a false convert, right? After all, what proof do we have that she lead an orthodox lifestyle?

Please, to all the Gerim in the world, to all the Shakespearian Actors in the world, to all those who thought they were keeping Judaism and had no opportunity to know what they were doing, to all the BTs who gave up everything to become religious, to all the innocent young children who have been converted as babies and toddlers and to the kind-hearted and living angels who are their parents and who opened their arms, their lives, their homes, and the most beautiful aspects of Judaism to those children--please accept my apology for this terrible decision and these backward men.

Most of us love you. Most of us respect you. Most of us know that you have a harder time than any other Jew, and that you probably know our traditions and our ways better than many of the born-Jews out there because you are Jews by Choice and you CARE.

You are Hashm's treasures. Don't let this man turn you back.

The evil of turning Jews away and telling them not to follow Shabbat and the Laws of Moses, as this Rabbi may very well be doing, is the gravest of all sins. May Hashm show him the Mercy that he has denied others.

The son of the late Jewish theologian and Holocaust survivor Emil Fackenheim plans to fight a decision by a Jerusalem Rabbinical Court Judge to retroactively annul his conversion of 27 years.

In August of 2008, Yossi Fackenheim, who was converted to Judaism at the age of two by an Orthodox Rabbinical Court in Toronto, had his conversion revoked by Rabbi Yissachar Dov Hagar, a judge on Jerusalem's Rabbinical Court.

Hagar's decision was made during divorce proceedings between Yossi and his former wife Iris, who were married as Jews in Jerusalem by the Chief Rabbinate of Israel in 2001.

The two came before Hagar to finalize their divorce. But in the midst of the divorce proceedings Hagar told Yossi that there was no need for a get (divorce writ) since Yossi was not Jewish as his mother was not Jewish at the time of his birth. She later converted to Judaism.

Orthodox Jewish law does not recognize marriages between Jews and non-Jews.

Hagar ignored various documents provided by Yossi including a copy of his conversion certificate, an official recognition of Yossi's conversion by Jerusalem Rabbinate Marriage Registrar Rabbi Yitzhak Ralbag issued before the marriage and a document issued by the Chief Rabbinate of Israel recognizing Ralbag's document.

In response to Hagar's decision, the Rabbinical Court administration said, "during Mr Fackenheim's divorce proceedings it became clear that he converted while still an infant, before he was able to make a conscious decision to convert.

"It also became clear during the proceeding that Mr Fackenheim never adhered to an Orthodox lifestyle. The rabbinic court decided that since Mr. Fackenheim's personal status was unclear, a get would be issued to the wife. However, no official decision was made regarding Fackenheim's status."

A witness who was present during the divorce proceeding but who preferred to remain anonymous said that the presiding rabbinical judge conducted the court session in a "surreal" way.

"First, the man was dressed like a Hassidic Rebbe, with a satin robe and a huge fur hat, and not like all the other rabbinical judges with simple black coats.

"Then the judge began to ask Yossi what he does for a living. Yossi told him that he was a Shakespearean actor. The judge responded that Shakespeare was anti-Semitic. We all thought he was referring to a Merchant of Venice. There was an attempt to convince him that in other plays Shakespeare came off as philo-Semitic.

"But we quickly realized that he was not referring to Shakespeare's work. He said that all goyim are anti-Semites. Then he turned to Yossi and said, 'you aren't Jewish either.' The implication was clear."

At the request of Iris's attorney, Jacob Segal, Hagar agreed to draft a document that permitted Iris to remarry. But Hagar added an appendix clarifying that Yossi was not Jewish and called him "Yossi the Convert" since "we do not know who are your mother and father," according to Yossi.

Yossi, who is presently in Britain working on a Masters degree in acting, told The Jerusalem Post by telephone that he intended to fight to "get my Jewishness back." But he said that he was still unsure which avenue to take.

He said he was deliberating between appealing to the High Rabbinic Court and filing a petition with the Supreme Court.

Yossi, who had no children with Iris, was concerned that too much media exposure might endanger the conversions of his siblings, also converts, and the status of their children.

In a letter of complaint to the Rabbinical Court, to the court ombudsman and to Chief Rabbi Shlomo Amar, Yossi detailed Hagar's degrading treatment.

The court ombudsman, former judge Eliezer Goldberg, has opened an investigation of Hagar's courtroom behavior, said a source who was asked to give testimony.

Yossi said that after it had become clear to Hagar that his conversion had been conducted while he was still an infant, the rabbinic judge began asking him questions.

"I told him [Hagar] that my father and mother adopted an Orthodox lifestyle," recalled Yossi, "but that after my mother became ill with Alzheimers our religious adherence wavered."

Yossi said that he did not recall if he and his family were leading an Orthodox lifestyle at the time of his 13th birthday, which, according to Jewish law, is the age at which a male becomes responsible for his actions.

"I am dumbfounded and hurt by Rabbi Hagar's behavior," said Yossi. "I am a Jew and I was raised as a Jew in a Jewish home where I received Jewish values throughout my entire life.

"My father, Professor Emil Fackenheim, may his memory be blessed, was a Holocaust survivor and devoted his entire life to healing the wounds created by the Holocaust. He stood for Jewish continuity and preventing assimilation.

In the wake of the Holocaust, Emil Fackenheim, who served in Canada as a Reform rabbi, created the concept of the "614th commandment," which posited that "one should not give Hitler a posthumous victory."

"To despair of the God of Israel is to continue Hitler's work for him," argued Prof. Fackenheim, who received a PhD in Jewish philosphy from the University of Toronto.

He believed that people of Jewish heritage have a moral obligation to observe their faith and thus frustrate Hitler's goal of eliminating Judaism from the earth.

Fackenheim's son Yossi said the treatment he received at the hands of Hagar was a direct transgression of this commandment.
Posted by Unknown at 10:29 AM