Operation Cast Lead By The Numbers 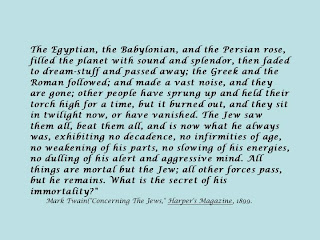 My answer to those who say that Israel's response to Gaza's aggression was not "proportional" is to say, "You are disappointed more Jews didn't die, right?"

After all, this is the essence of what they are saying. They want us to die, and they want us to disappear. However, they are not the first to wish this upon us, and they will not be the last. If it weren't for the miracles of Hashm, our enemies would have their wish.

I am hoping this document is a work in progress and that, after the coronation of "King Obama, Master of the Universe," Israel will suddenly notice all the rockets that are continuing to land in Israel, and return to finish the job.

I am wondering how some of these numbers were arrived at. Under the "homeless" category, for example, are they including all of those thrown out of Gush Katif, and all of those forced, by the aggression of Hamas, to flee their homes in the South of Israel? I doubt it.

Under the "Estimated Cost" category, are they including all of the extra work we will have to do to protect ourselves after the stupidity of Olmert, Livni, and Barak forced us to leave without finishing the job? Are those costs calculated to include the extra military costs we need to absorb in order to protect ourselves now that our army is no longer feared by our enemies? I doubt it.

So, these are the numbers, so far, of the Gaza War--or, if you prefer, the real name of this category--the continuing costs of the Gush Katif withdrawal.

M
-----
The Gaza War in Numbers
http://www.israelnationalnews.com/News/News.aspx/129502
by Hillel Fendel

(IsraelNN.com) Operation Cast Lead, the just-ended anti-terror military offensive waged by the IDF in Gaza, began on Dec. 27, 2008, and ended three weeks later with a unilateral Israeli ceasefire that went into effect at 2 AM on Jan. 18, 2009.

13 Soldiers and Civilians Killed
Of the 13 Israelis killed during the three weeks of war, four were felled by Hamas rocket and shelling attacks in the first three days: Babar Vaknin, 55, of Netivot; Bedouin construction worker Hani Al-Mahdi, 27, from Aroer; Israeli-Arab soldier St.-Sgt. Lutfi Nasraldin, 38, of the western Galilee; and Irit Sheetrit, 39, mother of 4.

Wounded and Homeless
780 soldiers and civilians received hospital treatment over the course of the war, including many who were treated for shock and trauma. As of Sunday, 64 were still hospitalized - 51 soldiers and 13 civilians. Soroka Medical Center in Be’er Sheva admitted the most patients during the war – 518, including nearly 200 soldiers.

Ten of the wounded are still listed in serious condition.

Thirty-five families were left homeless as a result of direct rocket hits, and 15 of them are still being housed in hotels.

Over 1,725 damage claims have been filed with the Finance Ministry’s Property Tax department. These include 424 damaged apartments and cars in Ashkelon, 404 in Ashdod, 388 in the Gaza Belt communities, and 324 in Sderot. A total of 268 cars were reported damaged by rocket shrapnel.

Industry in the south suffered direct losses of 88 million shekels ($23 million), largely because of worker absences. In factories within 10 kilometers of Gaza, worker attendance ranged between 40% and 60% during the three weeks of war.

How Many Rockets?
The IDF Spokesman's office said that a total of 640 Grad/Katyusha and Kassam rockets were fired into Israel by Hamas, as well as 180 mortar shells.