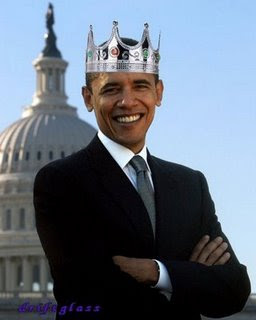 It appears, in direct defiance of Obama's "Only One President At A Time" policy, that his the first action of President Obama was before he was president, and it is a scandalous action.

Now we know what Obama thinks of Israel.

He prefers us as victims, not as victors.

He wants us to be defenseless but for the "comforting wing," not of Hashm, but of the United States.

He has undermined our military, and weakened our reputation in a place where reputation is everything, and he has allowed violent terrorists and their sympathizers the opportunity to rearm against us, costing us the precious lives of how many more young Jewish men and women?

It’s just more patronizing and self-aggrandizing behavior on the part of the administration of the United States toward Israel. So much for “change,” Mr. Obama. It looks like more of the same to me.

Why didn't you just retain Rice? She was a perfect keeper for any administration who thinks that Israel should be kept on a short leash. Hillary has too much independence of thought and action—I doubt she will last long if your will is that Israel should bow and scrape to your glory.

We already have a G-d, Mr. Obama, and it ain’t you. Too bad Israel’s government has forgotten that. Perhaps, with a new election cycle, we will find someone who still remembers—but I doubt it.

Bibi is probably going to be PM, and the best I can say about that situation is that, at least Bibi worships Bibi and not the American government. We can guarantee Bibi will always do what is best for Bibi. I guess that is a change for the better.

It appears the two men have something in common.


HERZLIYA, Israel – Representatives from the incoming administration of President-elect Barack Obama informed Israel they would like to see the Jewish state's offensive against Hamas scaled back before tomorrow's inauguration, according to a top defense official who spoke to WND.

The official, speaking on condition of anonymity because he was not authorized to talk to the media, said he was not aware of any official demand from Obama or his team. But he said members of Obama's team made it clear to the Israeli government it would be better for them if Israel's three-week offensive came to an end as Obama assumes office.

A representative from Prime Minister Ehud Olmert's office, who would not speak on the record on the matter, denied there was any contact between Olmert's office and Obama regarding the Hamas offensive.

"There is one president. His name is George Bush. We only deal with him. There was no contact with Obama," the representative told WND.

A spokesman for Obama's transition team did not immediately return phone and e-mail messages on the matter.

Olmert said Israel wanted out of Gaza as soon as possible, and his spokesman, Mark Regev, told reporters "enormous amounts" of humanitarian aid could be allowed into Gaza if Hamas halts its fire.

The Israel Defense Forces today gradually withdrew some grounds forces and tanks from the Gaza Strip after Olmert's security cabinet this weekend unilaterally declared a cease-fire with Hamas that would see a gradual end to Israel's raids in Gaza as long as Hamas stopped firing rockets into Israel.

Hamas announced it would abide by a weeklong truce, but it launched at least 20 rockets and eight mortars from Gaza into nearby Jewish communities since making its cease-fire declaration yesterday.

"What happened was a deity and humanity victory. This victory was not achieved by one faction, or party, or area, but by our entire people," he claimed.

Olmert contended Israel's operative goals were achieved since the start of the offensive Jan. 3. He claimed Hamas would find it difficult to continue smuggling weapons into Gaza and stated the IDF controlled the northern Gaza Strip – the area from which most rockets are launched into Israel.

On the ground, the IDF does not completely control northern Gaza, as clearly evidenced by Hamas' continued ability to fire rockets from the zone. Israel is negotiating an international monitoring mechanism it hopes will stop Hamas from smuggling weapons from neighboring Egypt into Gaza. But previous international monitors stationed along the Egypt-Gaza border fled their duty and repeatedly failed to stem Hamas' weapons smuggling. The monitors were stationed at the border following Israel's 2005 evacuation of the Gaza Strip.

Even if a beefed-up international force is established inside Gaza, it is not clear whether such a force would do its job. Currently, a 13,000-strong United Nations Interim Force in Lebanon has done little as the Iranian-backed Hezbollah militia has rearmed in the area, many times in full view of the international troops, according to Israeli defense officials.

Hamas vowed today to rearm in defiance of any Israeli and international efforts to prevent weapons smuggling.

"Do whatever you want. Manufacturing the holy weapons is our mission, and we know how to acquire weapons," Abu Ubeida, a spokesman for Hamas's armed wing, told a news conference.
Posted by Unknown at 9:47 AM