Will There Be a Shortage of Etrogim This Year? 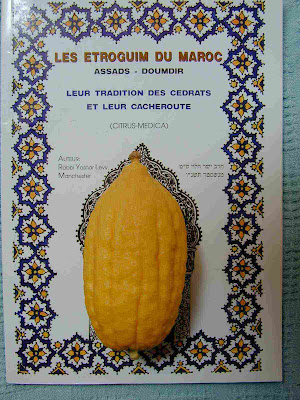 The Blog, "Yeshiva World," is truly a blessing--especially when they post such interesting and helpful articles for the Jewish world as this one.

In this posting, YW goes over some of the issues surrounding the availability of etrogim for Sukkot this year.

The price has been rising steadily every year. I'm thinking that, this year, the shortage may cause the prices to really go through the roof.

If you have a chance, order early!!

As is well known, during Shmitta the accepted halacha is that all fields in EY are hefker and all fruits growing on the trees in these fields are hefker. As a result, anyone and everyone are permitted to walk in and gather fruits without having to pay anything for them. However a person is only permitted to take small amounts. To gather larger amounts, even for the purpose of giving it away for free to others, is not permitted. There is also another issur of sending peiros shevi’is to chutz la’aretz, because the din is peiros shvi’is are to be consumed in EY only. In consideration of these two dinim it would seem that it is not possible to send esrogim from EY to the US (or anywhere else outside EY). There are, however, a few ‘halachic’ eitzos based on the clear instructions and guidance of the Poskim that would permit the importation and distribution of esrogei EY in Chutz La’aretz.

First, we need to be aware that the situation is in fact one that is categorized as ’sha’as hadchak.’ Since esrogim from EY constitute 85-90% of the supply of esrogim for Jews all over the world, not being able to have esrogim from EY would cause a tremendous problem. In light of this fact, the majority of Poskim agree that esrogim would be permitted to be sent out of EY to enable people to have an esrog for Yom Tov. Otherwise a great many people would be unable to be mekayem the mitzva of daled minim this year. (It should be noted that there are prominent Poskim in both EY and America who disagree with this heter.) This takes care of one problem. The second problem of gathering large amounts of esrogim is solved in the following manner.

The takono of Otzar Bais Din

The Bais Din sets up something known as an ‘Otzar Bais Din’. This means that the Bais Din takes control of the field and gathers all the produce for the purpose of distributing the fruits free-of-charge to the masses of people who cannot manage to get to the actual fields themselves. Therefore the Bais Din acts on their behalf. However, while the fruits themselves are hefker, Bais Din is allowed to charge money to make up for their expenses in gathering and transporting the esrogim (or other produce of the field).

By combining these two halachos (i.e. the heter to send to Chutz La’aretz and the establishment of Otzar Bais Din) esrogim will be coming from EY to the US this year.

The rules of Otzar Bais Din

This, however, is not the end of the story. Once the esrogim reach the US they must be distributed according to the strict rules of Otzar Bais Din.That means that they are essentially to be given away ‘free’ with the only cost being that of expenses. The Bais Din calculates a fixed amount for each esrog to cover the expenses. This price is THE SAME for each esrog since there is no value to the individual esrog itself since the esrog itself is NOT being sold. (Bais Din is allowed to make ’sugim’ (categories) and make a fixed price for the esrogim in each category. The reason for this is too complex to go into here.)

In addition a few other takanos are instituted concerning these esrogim in how they are to be sold. First they are to be sold only in CLOSED BOXES. The reason is that the ‘regular’ way of selling esrogim involves looking it over and checking it etc. Since in shmitta it is OSSUR to do business with peiros shvi’is so we are forbidden from selling it in the ‘regular’ manner. Selling it in a closed box indicates that there is no value to the individual esrog. A person only pays for the ‘work expenses’. As long as the esrog is not possul it is his and there are no refunds or exchanges.

This arrangement of selling esrogim in closed boxes is the only way approved for distributing esrogim during shmitta by virtually all the Batei Din in EY utilizing the takono of Otzar Bais Din.

The halachic validity of Havla’ah

Now some people are under the mistaken impression that there is a way around the ‘flat price’ takono of the Otzar Bais Din in the following manner. They say that while a ‘flat set price’ is put on the esrog, the distributor is permitted to insist that the person buy a lulav along with it. They also say that the price of the lulav can be inflated even to an outrageous amount. For example, an esrog expense can be set at 70 but the person is told that along with the 70 he MUST buy a lulav for an additional 90 (or more)! They call this arrangement ‘havla’ah’. However, according to Rav Shlomo Zalman Auerbach zt’l and lhbch’l Rav Eliyashev shlita, Rav Vozner shlita, and Rav Nissim Karelitz shlita this method of havla’ah is FORBIDDEN. They categorically and unequivocally state that ‘havla’ah’ is NOT PERMITTED WITH ESROGIM DISTRIBUTED BY OTZAR BAIS DIN. In the letter written by Rabbi Efrati and signed by the above Gedolim, they state that this is counter to the entire concept of Otzar Bais Din and anyone doing so is TRANSGRESSING THE LAWS OF SHMITTA r’l!

Therefore the Gedolei HaPoskim state that this year anyone wishing to buy an esrog from EY in chutz la’aretz must make sure to only purchase one that is in a closed box and to only pay the price established by the Otzar Bais Din without any additional purchase requirement.

One should also be aware that each Otzar Bais Din may set its own additional rules and takanos.The Bais Din of Rav Nissim Karelitz, for example, requires anyone getting an esrog from their Otzar to have ‘ordered’ the esrog IN ADVANCE. In other words, you cannot just walk into an ‘esrog store’ and pay for a closed box etc.. Rather you contact a ‘dealer’ who this year is designated as a ’shaliach of Bais Din’ and request that he obtain for you an esrog from the Otzar Bais Din. You pay him the money. Then he sends in his list of customers (with their names etc.written down) and THEN the Bais Din sends him the esrogim and you come to pick it up. This is done to make it look less like doing business with peiros shvi’is and more like just being a shaliach who is paid for his tircha.

Since a the majority of esrogim known as ‘Chazon Ish Esrogim’ are under the hashgacha of Rav Nissim Karelitz, this means that only by following these rules will you be able to obtain such an esrog. Failure to submit a request in advance will mean that you CANNOT get one.

Shmitta and Lulavim and Hadassim

Whether shmitta applies to Lulavim and Hadassim is a question as well. Concerning Lulavim, Rav N. Karelitz has stated that in shmitta people should avoid taking a lulav grown in EY (this includes the well known ‘Deri’ lulavim). Other Poskim disagree. Concerning Hadassim, most Poskim hold that there is no issur, though some say not to use them.

The halacha of bi’ur

Now a few more things need to be noted when using an esrog from EY during shmitta. First, in general there is a din of bi’ur on peiros shvi’is and this din applies to esrogim as well. The din is that after a certain date the leftovers of each category of fruit are to be left in the field and not gathered up. Also, any fruits that you already posses need to be consumed by this date or put into the field. This needs to be in the fields in EY.For esrogim this means that after Sukkos the esrogim sent to chutz la’aretz need to be sent back to EY to be placed in the fields. This is an obligation that cannot be overlooked when doing the mitzvah of daled minim. To dispose of the esrog in America would be keneged this din (according to most poskim).

Amount and quality of Esrogim

Finally, because of the fact that VERY limited work can be done on the fields during shmitta, there is generally a much smaller amount of esrogim available. And whatever is available is of a much lower quality than usual, since regular farming techniques are not allowed.

As far as non-EY esrogim, these are the following available sources:

The current status is as follows:

Hope this information clarifies the esrog status for Sukkos 5769.

(The above article was submitted to YWN - and one should consult with their individual Rov what one should do this Sukkos. The article is merly meant as an education)
Posted by Unknown at 12:22 PM