Amar Calls to End to Discrimination Against Ethiopian Jews 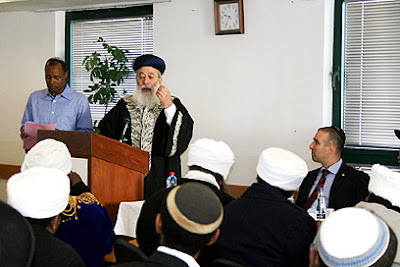 The reason most people are against Ethiopian immigration in Israel is, I am told, not because they are black but because they are evangelical xtians who attend church, attempt to proselytize other Jews, and who are involved in gangs, crime, violence, and drugs.

Whatever the case, the chief rabbis have declared that the Ethiopians are Jews, and they should be afforded the full legal rights of immigration that any other Jews are afforded.

But, of course, it has nothing to do with race. Right?

And, of course, this whole thing is happening on a backdrop of religious schools who won't let any Mizrahi Jews into their schools either . . .and so-called "religious" families who won't accept a Sephardic shidduch because, of course, Sephardim are violent and emotional, we are involved in drugs and gangs, and we are never as religious as the nice Ashkenazi Jews from such esteemed families. . .but, of course, that has nothing to do with our color or our minhag, right? It isn't our fault that the Ashkenazim are so much better and more religious than us in every way. Probably cleaner too, by the way. (I do hope you are reading the previous paragraph with a drippingly satiric voice. If not, you are either seriously mentally ill, OK?)

I am willing to accept that there are some bad apples among the Ethiopians, and that some of those bad apples are also some of the most flamboyant members of the Ethiopian community. I am also willing to accept that a lot of very lost souls came to Israel--and that those lost souls, desperate for a new life in a new land, came to Israel with the idea that they would convert Jews to xtian beliefs, establish churches, and do their best to steal the souls of their brothers. However, I also know there are hundreds upon hundreds of Ethiopians who are trying to do the right thing and get the education they need, and follow the ways of the rabbis who are teaching them, and who pray with sincerity, and who are Jews to their bones.

But we still regard them as Jews.

We still care about their kids.

We still love them and see them as members of the Tribe.

We still see am Yisrael as important.

We know it is almost Rosh Hashana.

Israel's Chief Sephardic Rabbi Shlomo Amar has issued a letter asking heads of religious schools not to discriminate children of Ethiopian descent, who wish to apply to their respective educational institutions.

Segregation?
Veteran Israelis gradually transfer children from local school following influx of students from immigrant families. 'This isn't about discrimination, there are some really sweet children amongst them, but the teachers can't handle the violence – enough is enough,' says concerned mother

Rabbi Amar's letter states that "our sages of blessed memory have taught us that the land of Israel is redeemed in agony, it is true that the difficulties of aliyah are immense.

"One of the more immense difficulties is the feeling of discrimination, especially in children's educational institutes," he emphasized. "Apart from the grief it causes in the parents, it affects the children's soul, which can cause bitterness."

Rabbi Amar's appeal came after he was presented with several examples of children being discriminated against by schools, based on the color of their skin.

In the spirit of the upcoming Rosh Hashana, Rabbi Amar has called the heads of the various religious schools to "search inside their souls".

"Sadly, we hear about more and more cases in which schools reject children based on the color of thier skin, though citing a different reasons... A thousand excuses, no matter how well written or said, cannot change the simple truth, and will not helo anyone during judgment day," said Amar.

"If they are weak, we must make them stronger through their studies. Please, do not sin against the child, because from each child a new world will rise. Our sages said 'care for sons of the poor who the will read the Torah, for you will not know who will succeed.'"

Phenomenon of 'blatant racism'
MK Mazor Bahaina (Shas), said he hoped Rabbi Amar's letter will end the what he called "blatant racism" and the shameful phenomenon of discriminating children based on their background.

Bahaina stressed that his comments were not directed at the heads of Ashkenazi institutes, since "we have the same difficulties with them, as everyone else... I don't expect Ethiopians to be treated better than those of Moroccan decent," he added, noting that his appeal is more directed at the Sephardi institutes, which are the subject of the majority of the complaints he receives.

The racism from Sephardi institues, according to Bahaina is the most infuriating. "Some places won't accept you even if you did go through all the approved conversion channels. We are talking about the same people who were themselves mistreated and know something about discrimination."

Bahaina hopes that Rabbi Amar's letter, which is co signed by Shas' spiritual leader Ovadia Yosef, will "bring around the soldiers to follow their orders and not rebel against them," referring to educational institutes who follow instruction from their spiritual leaders.

Bahaina hopes that the letter will end the discrimination, though he says that he will "continue to fight the phenomenon if it persists".

Bahaina quoted the law, which states that "any educational institute that discriminates a person based on their background or skin color can be immediately closed down.

"We have no other Torah. We grew up on it for thousands of years, and a third of the Ethiopian community goes to religious schools. We will do all that we can, within the law, to make the institutions realize that it's a mistake which will cost them dearly".
Posted by Unknown at 5:26 PM