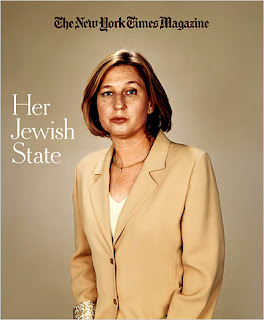 I am praying as I write this. I am praying that Livni was just playing along with Olmert in doing all the terrible things that she has been doing--such as giving away Jerusalem, planning to destroy what is left of Yesha, and siding with the Peace-Now Nazis.

I am hoping that, when she is independent, she will act to protect Israel for us, but I'm not betting on it.

I'm also not betting that Shas or UTJ or any of the religious parties will actually follow through and refuse to be a part of a coalition that has worked to undermine Jewish control over our land and our Holy Temple. They will do as they always have done--sacrifice what is important for what is politically expedient. Very sad.

I am hoping that Labor or one of the other left wing parties will, for some unknown and unrelated reason, refuse to make a coalition so that we are saved from the "forward" expansion of Kadima.

I know one thing for certain, Livni is no Golda.

Throughout the campaign, Livni aimed to convince Kadima voters that she will bring the party back to former Prime Minister Ariel Sharon's glory days. She repeatedly stressed her clean, uncorrupted image, noting that "I've been conducting myself differently throughout my political life, not in order to say I'm different, but rather, to prove that it is possible to do it differently."

Livni will now replace Ehud Olmert as Kadima chairman and will have the opportunity to form a government. Should she be able to secure a coalition, Livni will become Israel's first female prime minister since Golda Meir, who led the country in the 1970s.

Meanwhile, Mofaz's activists were stunned by the exit polls. "I'm shocked. This contradicts everything I thought," one of them said. A female activist added: "Perhaps there is still some hope. Maybe the actual results will be the oppositeand Shaul Mofaz will become the next prime minister. We believe in him."

Elsewhere, Dichter's camp issued a statement in response to the exit polls: "This is Minister Dichter's first but certainly not last race. Overall we're quite satisfied with the poll results and are waiting for the actual results."

Tense day
The day was marred by reports of irregularities and mayhem. The Central Elections Committee disqualified the polling station in Rahat after a man entered the site and threw all the ballots out the window. Irregularities were also reported in other polling stations.

Voting hours were initially extended to 11 pm in wake of Livni's request, but the decision was changed following an appeal submitted by Mofaz's camp. Mofaz was hoping for a low turnout rate in order to capitalize on his camp's superior organizational abilities. However, it now appears Livni was able to bring her supporters to the polling stations and score a huge victory.
Posted by Unknown at 2:50 PM