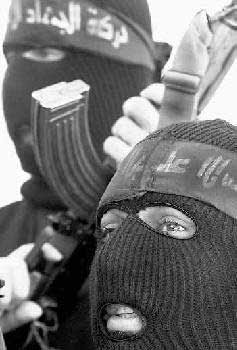 These are not “outposts,” these are Jewish lives. The government of Israel is allowing Jews to be put at risk by refusing to defend them in their own land.

If peace was really possible, if the arabs were people we could trust, we wouldn’t need to worry, but this is not the case.

We are now allowing Jewish men, women, and children to be unguarded during Ramadan in a political atmosphere where the arabs want to kidnap our people and hold them for political ransom.

This is not only a big moral and ethical lapse, it is also a practical, military lapse. This is a huge mistake. May Hashm watch over them and protect them. May whomever made this order be subject to the judgment of heaven.

M
-----
Who Gave the Order Not to Guard the Outposts?
http://www.israelnationalnews.com/News/News.aspx/127597
by Hillel Fendel

(IsraelNN.com) Civil-guard forces in Jewish towns in Judea and Samaria (Yesha) are told that the "unauthorized outposts" are not included in their purview.

Of late, responsibility for the defense of several Jewish towns in Yesha has been transferred from the Israel Defense Forces to units comprised of local citizens. Trained by the Defense Ministry, the units are a form of improved local emergency local forces, familiar with the area and able to deal with terrorist and other threats.

The goal is to lighten the army's load, and the project is expected to expand to additional communities.

New Mandate Doesn't Include Certain Neighborhoods
Arutz-7's Shimon Cohen reports, however, that of late, as new forces receive their "mandate," they are informed that they are not to act in defense of the "unauthorized outposts" in their sector.

This means that if they do, and are subsequently injured or killed, they will not be included in the army's insurance coverage.

Included in the "don't defend" edict are not only small outposts with a handful of caravans, but also full-fledged neighborhoods on the outskirts of existing communities which for various political reasons have not yet been completely approved.

"We have received an illogical order," one emergency force member told Cohen. "Let's say I'm protecting a community and I hear that in the northern neighborhood, there is a suspected terrorist infiltration. This order means that I'm supposed to sit at the gate and not do my job of defending the citizens where I'm truly needed."

Death Sentence for Illegal Outposts?
One woman, a resident of the Shomron, said, "Let's say that where we live is illegal. Does that mean we deserve a death sentence for that? The government always says that it can't ignore the humanitarian needs even of the Arabs in Gaza - so what about our humanitarian needs?"

Journalistic Search
Cohen sought the source of the new orders, but was unsuccessful. Defense Ministry sources told him it had nothing to do with them, and that "decisions regarding the level of protection are made by the Central Command of the IDF, exclusively governed by military considerations."

The IDF Spokesman's Office told Cohen, "The Central Command is responsible for the security of all those in the Judea and Samaria sectors. Decisions regarding the deployment of the various forces are made after security assessments and in light of warnings and threats. It must be clarified that in any event, this action will not detract from the Central Command's ability to fulfill its obligation to protect those who are in its sector."

The implication is that the army may or may not have given the orders, but that in any event it will protect the outposts and their residents. If forces are not on the scene, however, this will necessarily be carried out less efficiently, if at all.

The response added, however, that back in 2005, Mazuz stipulated that outposts could not have their own exclusive security officers. Instead, he said, a security officer from a nearby town - a non-resident of the outpost - could provide security to the outpost as an adjunct to his main job.

No Answer
Cohen sums up: "We remain without an answer: Who gave the order to forsake the security of dozens of Jewish families throughout Judea and Samaria?"
Posted by Unknown at 5:16 AM