"The vision of a greater Israel no longer exists. Those who speak of it are delusional" 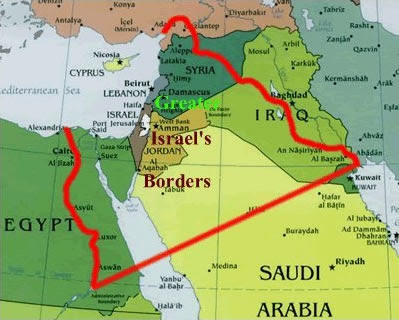 Hashm is delusional, according to Olmert. The Torah, I guess, is a book of craziness, and those who follow it and believe it have all lost our minds--that would be all the religious Jews in the world, and, or course, the Zionist Xtians.

Don't worry, we haven't lost our mind or our vision. We see what is real.

Olmert is the one with the blurred vision. He sees only what is easiest for him politically. Olmert wants peace, and the only peace Olmert can guarantee is the peace of death for Israel.

Sharon started the evil, Olmert continued it. Who wants to move “forward” from here? Kadima, G-d willing, is dead—either Kadima is dead, or Israel is.

I am hoping the Israeli people choose life and refuse to back a government with these suicidal self-hating traitors at the helm.

I have a feeling that, the moment Kadima is voted out, Hashm will finally grant peace to Sharon and release him from the prison of his coma. Let's hope that Sharon is released soon.

Prime Minister Ehud Olmert has discussed with the Palestinians transferring to them 98.1 percent of the West Bank, Channel 2 reported on Sunday evening.

The report on the ongoing negotiations was broadcast in advance of Tuesday's planned meeting between Olmert and Palestinian Authority President Mahmoud Abbas.

The Prime Minister's Office declined to comment on the news item and said only that many such media reports had been published in the last months regarding the talks.

Earlier in the day, during what could be his last cabinet meeting before he becomes the head of a transitional government, Olmert addressed Israel's relationship to the West Bank when he spoke of a voluntary evacuation bill to help relocate settlers living east of the security barrier.

"The vision of a greater Israel no longer exists. Those who speak of it are delusional," the prime minister said. No vote was taken on the measure.

According to Channel 2, however, Olmert is considering concessions far beyond land east of the barrier and could transfer 98.1% of the West Bank to the PA. That is significantly more than the 94% to 96% that had been discussed in previous negotiations.

The report states that Abbas has asked that Israel cede the Jerusalem area settlements of Ma'aleh Adumim and Givat Ze'ev, but is willing to negotiate the status of the Jerusalem neighborhoods of Gilo and French Hill, which are over the Green Line.

In the past the Palestinians have demanded that Israel fully withdraw to the pre-1967 borders, including from eastern Jerusalem. Israel has insisted it plans to keep the larger settlements blocs including Ma'aleh Adumim and Givat Ze'ev as well as the Jewish neighborhoods of east Jerusalem.

The future of Jerusalem, according to Channel 2, was being negotiated between Olmert and Abbas, and not by the team led by Foreign Minister Tzipi Livni.

Olmert has also agreed that 5,000 Palestinian refugees would return to Israel - a thousand refugees every year for five years, according to the report.

Abbas allegedly rejected the proposal and was demanding the return of many more refugees.

According to the report, the Palestinians were also interested in access not only to the Dead Sea but also to the Kinneret, as they claimed they deserved some rights over the water flowing into the lake because the Jordan River runs through Palestinian territory.

The two men spoke of the two-state solution and Olmert's voluntary evacuation plan.

Despite the Channel 2 report, both Abbas in an interview with Haaretz over the weekend, and Vice Premier Haim Ramon in briefing reporters on Sunday, expressed skepticism as to the success of the negotiations.

But what was clear, he said, was that in the future, "settlements east of the barrier won't be under Israeli sovereignty."

There was no reason why those settlers who understood that the barrier represented a future border should have to wait five or 10 years to be evacuated, Ramon said.

At Sunday's cabinet meeting, he proposed a voluntary evacuation bill that would offer property owners in the 72 settlements outside of the barrier an average of $300,000 or NIS 1.1 million for their homes.

Those homes would then be sealed or destroyed so they could not be reused by other settlers, Ramon said.

His bill, which has the support of Labor but not Kadima or Shas, is an outgrowth of an earlier proposal by MK Colette Avital (Labor) and MK Avshalom Vilan (Meretz), who three years ago formed the group One House to advocate for such a bill.

Such a measure, Ramon said, would help those settlers who did not enjoy the same security offered Israelis living inside the barrier and would also be seen by the Palestinians as a sign of good faith toward the negotiations.

Ramon's proposal was immediately objected to by the four candidates competing in Wednesday's primary for the Kadima leadership.

If the government wanted to make a gesture toward the Palestinians that involved territory, it should evacuate the unauthorized outposts, said Interior Minister Meir Sheetrit. That was particularly true, he said, given that it had already promised the international community that it would do so.

Foreign Minister Tzipi Livni warned that the Palestinians would view the measure as a unilateral step. She added that Israel should not take steps to determine a border while it was in the midst of negotiating one with the Palestinians.

Transportation Minister Shaul Mofaz said that such a law would embolden the Palestinians to increase their demands.

Public Security Minister Avi Dichter said the proposal would be impossible to implement. More to the point, it would make any future evacuations harder to carry out because the net effect of the bill would be to replace less ideological settlers with more determined ones.

In defense of his proposal, Ramon told reporters that the borders under negotiations with the Palestinians were already well known.

Livni, he said, could only wish that the barrier would in fact be the final border. With respect to Dichter, Ramon said that implementation should not be an issue in considering legislation.

He added that he believed the bill could be implemented and that if fewer settlers lived in those 72 communities, they would be easier both to defend and eventually to evacuate.

Settlers have attacked the plan and have pledged to outbid the government by offering those who want to leave more money.

In Samaria, where a new citizens' protest movement has already started, its leader, former Samaria Regional Council head Benny Katzover, said they were collecting signatures of residents who had pledged not to leave.

The regional council had received many calls from people who wanted to move there to protest against the Ramon bill, he said.

Speaking in defense of the voluntary evacuation bill at the cabinet meeting, Olmert said that for the 40 years since it acquired the West Bank during the Six Day War, Israel had been making excuses as to why it could not do anything.

This, he said, did not help Israel. It was important Israel showed it had taken initiative in the peace process.

"We have to advance the voluntary evacuation compensation bill and to bring it to the cabinet [for a vote]," the prime minister said.

Olmert said he had not always supported territorial concessions and that he had initially felt that then-prime minister Ehud Barak had offered the Palestinians too much at Camp David in 2000. "I thought that the land between the Jordan River and the sea was ours," he said.

In the end, he said he came to the conclusion that we had to reach an agreement with the Palestinians if we did not want to see Israel become a binational state.

There was no time to waste, Olmert said. adding: "We can argue about every small detail and find that when we are ready for an agreement there is no partner and no international support."

In the not too distant future, there would come a day when "we will want those same solutions that we are rejecting today," he said.

Israel had to reach a final peace agreement with the Palestinians and the Syrians. If this happened, then relations with other Arab nations would follow suit, he said.
Posted by Unknown at 7:40 PM