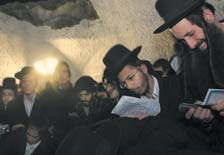 Imagine a minor Israeli official closing off some Mosque during Ramadan to punish the arabs for not condemning an attack. What would happen?

The entire country would be shut down with riots and violence and protests.

But some two-bit dictator of a minor Israeli official can violate an international agreement (just a little thing known as Oslo--that guarantees Jewish access to Joseph's Tomb), and "punish" Jews during an important religious time because he is angry that the Jews wouldn't condemn an attack on an Arab village after the arabs attacked a nine year old Jewish boy.

Did he ask that the arabs condemn the attack on the boy? Does he punish the arabs in the same way he is punishing the Jews?

This is completely unjustified, and completely illegal. He should be immediately fired.

Following recent settler violence in the West Bank, the IDF Central Command canceled a number of scheduled visits to Joseph's Tomb in Nablus last week and says it will not permit any until the settler leadership forcefully condemns the attacks, The Jerusalem Post has learned.

The decision was made by Samaria Brigade commander Col. Itzik Bar and was delivered to the settler leadership by Maj. Nehemia Hen, who is in charge of settlement security in the area.

Jews have been allowed access to Joseph's Tomb since the beginning of the year in monthly visits coordinated with the Samaria Brigade.

Each time, at least five buses were allowed access to the tomb, which is located on the outskirts of Nablus. It was the site of heavy fighting in the beginning of the second intifada in 2000, prompting the army to withdraw from the holy site, which was later ransacked by Palestinians.

But following the settler rampage through the Palestinian village of Asira el-Kibliyeh in response to the stabbing of nine-year-old Tuvia Shtatman in Yitzhar on September 13, the IDF decided to suspend visits to the tomb.

Eli Rosenfeld, a Samaria Regional Council employee who is in charge of coordinating visits to the tomb with the IDF, said he received a call from Hen on Wednesday informing him that they were suspended until further notice.

"Hen said that the IDF wanted the settler leadership to condemn the incident two weeks ago in Asira el-Kibliyeh as well as the burning down of olive trees near Gilad Farm, even though there is no proof that settlers were involved," Rosenfeld told the Post.

"He said that there is nothing to talk about until future notice."

During the Jewish month of Elul and ahead of Rosh Hashana and Yom Kippur, Rosenfeld said, Jews are particularly interested in visiting the tomb. On Thursday, Rosenfeld was hoping to be able to escort a rabbi from New York who flew here especially to visit the tomb.

"We have been fielding thousands of requests to visit the tomb," he said. "Now there is nothing we can do."

The IDF Spokesman's Office confirmed that the visits had been suspended but said this was because of "operational concerns" that would last until some time in October.

Rosenfeld rejected the claim, saying that Hen explicitly told him that the brigade commander's decision was a "punishment" for the settlers for not condemning the recent violence.

"There is no security reason why we can't go in to pray there," he said. "The IDF operates in Nablus almost every night and they can easily accompany us, like they have done for the past year."
Posted by Unknown at 7:27 PM