They Pray With Their Backsides Toward the Holy of Holies 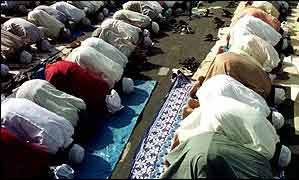 The arabs never believed Jerusalem was holy, and the only reason they want our Temple is because they don't want us to have it. Ask the Hindus about how the Moslems create "holy" places in their temples too.

The only reason the arabs want Jerusalem is to provide a better place to kill us. It would make a very nice launching pad to destroy us. There is nothing holy about it to them.

The secular Jews are fools, and Olmert is their king. Disgusting, vile, horrible things are being planned as we sleep in our beds and the Shas weenies, the Kadima fools, the labor lapdogs and the Likud Ludites are not going to save us.

If they do as they say, and try to destroy the homes of Jews in Judea and Samaria and give half of Jerusalem away, they will start a civil war. This is a very scary time. I am hoping the voters of Israel will stop this, but I am not counting on it.

When the Prophet Mohammad established Islam, he introduced a minimum of innovations. He employed the hallowed personages, historic legends and sacred sites of Judaism and Christianity, and even paganism, by Islamizing them. Thus, according to Islam, Abraham was the first Muslim and Jesus and St. John (the sons of Miriam, sister of Moses and Aron) were prophets and guardians of the second heaven. Many Biblical legends ("asatir al-awwalin",) which were familiar to the pagan Arabs before the dawn of Islam, underwent an Islamic conversion, and the Koran as well as the Hadith (the Islamic oral tradition), are replete with them.


Islamization was practiced on places as well as persons: Mecca and the holy stone - al-Ka'bah - were holy sites of the pre-Islamic pagan Arabs. The Umayyad Mosque in Damascus and the Great Mosque of Istanbul were erected on the sites of Christian-Byzantine churches - two of the better known examples of how Islam treats sanctuaries of other faiths.


Jerusalem, too, underwent the process of Islamization: at first Muhammad attempted to convince the Jews near Medina to join his young community, and, by way of persuasion, established the direction of prayer (kiblah) to be to the north, towards Jerusalem, in keeping with Jewish practice; but after he failed in this attempt he turned against the Jews, killed many of them, and directed the kiblah southward, towards Mecca.


Muhammad's abandonment of Jerusalem explains the fact that this city is not mentioned even once in the Koran. After Palestine was occupied by the Muslims, its capital was Ramlah, 30 miles to the west of Jerusalem, signifying that Jerusalem meant nothing to them.

Islam rediscovered Jerusalem 50 years after Mohammad's death. In 682 CE, Abd Allah ibn al-Zubayr rebelled
against the Islamic rulers in Damascus, conquered Mecca and prevented pilgrims from reaching Mecca for the Hajj. Abd al-Malik, the Umayyad Calif, needed an alternative site for the pilgrimage and settled on Jerusalem which was then under his control. In order to justify this choice, a verse from the Koran was chosen (17,1 = sura 17, verse,) which states (translation by Majid Fakhri):


“Glory to Him who caused His servant to travel by night from the Sacred Mosque to the Farthest Mosque, whose precincts We have blessed, in order to show him some of Our Signs, He is indeed the All-Hearing, the All-Seeing. "


The meaning ascribed to this verse is that "the furthest mosque" (al-masgid al-aqsa) is in Jerusalem and that Mohammad was conveyed there one night (although at that time the journey took three days by camel,) on the back of al-Buraq, a magical horse with the head of a woman, wings of an eagle, the tail of a peacock, and hoofs reaching to the horizon. He tethered the horse to the Western Wall of the Temple Mount and from there ascended to the seventh heaven together with the angel Gabriel. On his way he met the prophets of other religions who are the guardians of heaven.

Thus Islam tries to gain legitimacy over other, older religions, by creating a scene in which the former prophets agree to Mohammad's mastery, thus making him Khatam al-Anbiya ("the Seal of the Prophets”.)


Not surprisingly, this miraculous account contradicts a number of the tenets of Islam: How can a living man of flesh and blood ascend to heaven? How can a mythical creature carry a mortal to a real destination? Questions such as these have caused orthodox Muslim thinkers to conclude that the nocturnal journey was a dream of Mohammad's. The journey and the ascent serves Islam to "go one better" than the Bible: Moses "only" went up to Mount Sinai, in the middle of nowhere, and drew close to heaven, whereas Mohammad went all the way up to Allah, and from Jerusalem itself.


What are the difficulties with the belief that the al-Aqsa mosque described in Islamic tradition is located in Jerusalem? For one, the people of Mecca, who knew Muhammad well, did not believe this story. Only Abu Bakr, (later the first Calif,) believed him and thus was called al-Siddiq (“the believer".)


The second difficulty is that Islamic tradition tells us that al-Aqsa mosque is near Mecca on the Arabian Peninsula. This was unequivocally stated in "Kitab al-Maghazi," a book by the Muslim historian and geographer al-Waqidi. According to al-Waqidi, there were two "masjeds" (places of prayer) in al-Gi'irranah, a village between Mecca and Ta'if - one was "the closer mosque" (al-masjid al-adna) and the other was "the further mosque" (al-masjid al-aqsa,) and Muhammad would pray there when he went out of town.


This description by al-Waqidi which is supported by a chain of authorities (isnad) was not "convenient" for the Islamic propaganda of the 7th Century. In order to establish a basis for the awareness of the "holiness" of Jerusalem in Islam, the Califs of the Ummayad dynasty invented many “traditions" upholding the value of Jerusalem, which would justify pilgrimage to Jerusalem for the faithful Muslims. Thus was al-Masjid al-Aqsa "transported" to Jerusalem. It should be noted that Saladin also adopted the myth of al-Aqsa and those "traditions" in order to recruit and inflame the Muslim warriors against the Crusaders in the 12th Century.


Must Judaism defer to Islamic myths?

Another aim of the Islamization of Jerusalem was to undermine the legitimacy of the older religions, Judaism and Christianity, which consider Jerusalem to be a holy city. Islam is presented as the only legitimate religion, destined to replace the other two, because they had changed and distorted the Word of God, each in its turn.


Though Judaism and Christianity can exist side by side in Jerusalem, Islam regards both of them as betrayals of Allah and his teachings, and has always done, and will continue to do, all in its power to expel both of them from this city. It is interesting to note that this expulsion is retroactive: The Islamic broadcasters of the Palestinian radio stations consistently make it a point to claim that the Jews never had a temple on the Temple Mount and certainly not two temples. (Where, then, according to them, did Jesus preach?)


Yasser Arafat, himself a secular person (ask Hamas!), did exactly what the Califs of the Umayyad dynasty did 1300 years ago: He marshaled the holiness of Jerusalem to serve his political ends. He must not have given control of Jerusalem over to the Jews since according to Islam they are impure and the wrath of Allah is upon them. Moreover, the Jews are the sons of monkeys and pigs. The Jews are those who distorted the holy writings which were revealed to them and denied God's signs. Since they violated the covenant with their God, He cursed them and they are forever the inheritors of hell. So how could Arafat hand over Jerusalem to the Jews?


The Palestinian media these days are full of messages of Jihad, calling to broaden the national-political war between Israel and the Palestinians into a religious-Islamic war between Jews and Muslims. For them, Christianity is no better than Judaism, since both “forfeited" their right to rule over Jerusalem. Only Islam - Din al-Haqq ("the Religion of Truth") - has this right, and forever.


Since the holiness of Jerusalem to Islam has always been, and still is, no more than a politically motivated holiness, any Muslim leader or ruler would be putting his political head on the block should he give it up. Must Judaism and Christianity defer to myths related in Islamic texts or envisioned in Mohammad's dreams, long after Jerusalem was established as the ancient, true center of these two religions, which preceded Islam? Should Israel give up on its capital just because some Muslims decided to recycle the political problems of the Umayyads 1250 years after the curtain came down on their role in history?

Dr. Mordechai Kedar is a lecturer at Bar-Ilan University’s department of Arabic.
Posted by Unknown at 7:59 PM