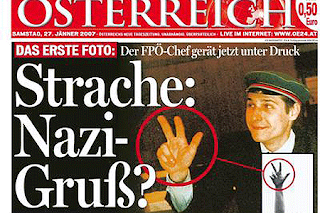 This is what happens when Holocaust Denial becomes accepted and the youth forget history. We have the re-emergence of the Nazi party in Austria.

This is a disgusting situation, and I am hoping the EU will start actively shunning Austria if this coalition comes to power.

But I won't hold out hope. The EU has also forgotten the Holocaust, shielding their anti-Semitism in stories about how they aren't "anti Jewish" they are just "Anti-Israel."

Sunday's Austrian election could mean a break in diplomatic relations between Israel and Austria if extreme right-wing parties enter a coalition government. Heinz-Christian Strache, who leads the Freedom Party, took part in paramilitary activities with neo-Nazis in the late 1980s and has been known to use the Nazi salute.

Then-prime minister Ehud Barak said the party's presence in the government "should outrage every inhabitant of the world."

"The Jewish people, wherever it may be, led by the State of Israel, will never allow the world to conduct business as usual in light of the events in Austria and their possible implications," Barak said at the time.

In a telephone interview with The Jerusalem Post last week, Dan Ashbel, Israel's ambassador in Vienna, said, "We are very concerned about the situation and parties who are xenophobic and base their policies on xenophobia. It is a danger and it is a very sad fact that this repeats itself."

The Freedom Party is campaigning using anti-immigrant slogans, such as "Asylum fraud means a flight home," and is exploiting anti-Israel and anti-Jewish sentiments to win votes.

The Freedom Party is aligned with self-styled Austrian chief rabbi Moshe Aryeh Friedman, who was barred from the Vienna Jewish community after he took part in the "World Without Zionism" conference in Teheran in 2005 and praised Iranian President Mahmoud Ahmadinejad.

"The rabbi is a good friend of mine... Why, we've even had him over to the house!" said John Gudenus, a Freedom Party politician who has been convicted of denying the Holocaust. In Austria, it is unlawful to cast doubt on the extermination of European Jewry as a historical fact.

On Tuesday, the Freedom Party held a press conference to announce a parliamentary inquiry into the expulsion of Friedman's children from Vienna's oldest Jewish school. Raimund Fastenbauer, general secretary of the community, told the Post "the Freedom Party is giving assistance to Mr. Friedman."

Fastenbauer said the move was justified because Friedman failed to pay school fees and because of his participation in the World Without Zionism conference.

Friedman "is educating his children with Holocaust revisionist views. He is not a chief rabbi and has no followers. He is a crook," Fastenbauer said.

Ariel Muzicant, president of the Austrian Jewish community, said the Freedom Party, as "a party with closeted Nazis, is not acceptable as a governing partner."

Strache, the Freedom Party candidate for chancellor, has aligned his party with the Iran and strongly opposes sanctions to force a suspension of Teheran's nuclear program. The party's founder, Jörg Haider, who has praised Nazi policies, broke ranks in 2005 to head a new rightist party, the Alliance for Austria's Future.

The alliance is running under the slogan "Austrian for the Austrians. For your sake."

According to a recent Gallup poll, the Alliance for Austria's Future is set to secure 8% of the vote, doubling its result in the 2006 election.

When asked if Israel would recall him if the extreme right-wing parties became part of a government coalition, Ashbel told the Post, "When the question begins with 'if,' we cannot give an answer. We have to see what type of government will be here."

"One should be careful" with polls, he said, citing the polls that had Foreign Minister Tzipi Livni trouncing Transportation Minister Shaul Mofaz for the Kadima leadership earlier this month instead of squeaking by with a 431-vote margin.
Posted by Unknown at 6:01 AM