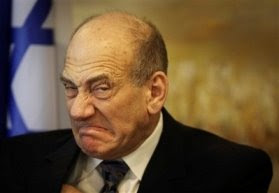 I am seriously running out of words for how disappointing, disgusting, devoid of morality, dishonest, and despicable I find the current PM of Israel (may his name be forgotten). He and his government are destroying Israel in pieces--shredding any pride we felt about our land.

He wants to divide Jerusalem, give away the Temple mount, put Putin in the center of our Holy City, and destroy our vibrant and growing Yesha townships.

He is the enemy of anyone who loves Israel, and I am hoping that, after a long period of incarceration for fraud, he is returned unceremoniously to France to live out his days in complete isolation. I hope everyone forgets who he is, and what he wanted.

I pray Israel survives this man and his plan. Kadima is the trojan horse of self-hatred, and I pray we don't find ourselves soon again in its political clutches.

I can't stand Bibi, but I am sure he will be our next PM. G-d willing, BiBi's promotion of his favorite person in the world (BiBi) will accidentally lead us to a renewal of our self respect and honor.

(IsraelNN.com) Prime Minister Ehud Olmert plans to introduce an embryonic strategy for the next Disengagement, this one from Judea and Samaria, at the Cabinet meeting on Sunday.

A statement issued by Olmert's office Wednesday night said he will present a plan "that has been coordinated by Vice Premier Chaim Ramon on the issue of voluntary relocation and compensation from Judea and Samaria."

According to the statement, "The issue will be discussed but will not voted upon at this stage." Olmert said he "intends to hear comments on the initiative; continued treatment of this issue will proceed accordingly."

The exact same language was used prior to the expulsion of some 8,000 Jews from their homes in the Gush Katif region of Gaza and northern Samaria in the summer of 2005.

Outraged Response by MKs In and Out of Gov't
The Shas party said bluntly that its ministers would oppose any discussion of Ramon's initiative in the cabinet session on Sunday.

"This move lacks public, legal and human legitimacy," declared Shas party leader and Minister of Industry, Trade and Labor Eli Yishai. He vowed to block it, adding, "These delusional ideas present us not just as people with no backbone, but as actual invertebrates."

Likud faction whip MK Gideon Saar was equally outraged, commenting, "Olmert continues his attempts to create facts on the ground in the spirit of the extreme Left, in his last days in office. Olmert did not have a majority in the Knesset to pass this delusional law before he resigned, and he will not have a majority now either."

Even Olmert's fellow Kadima party member, MK Otniel Schneller, said that "if the 'expulsion compensation law' passes, the government should be disbanded."

Schneller, who lives in Maaleh Michmas in southern Shomron and is thus a potential candidate for expulsion, said "In a democratic country, boundaries are not drawn through government-sponsored bribery."

Time is Running Out for the Prime Minister
Prime Minister Olmert may have lost his race to put some form of final status agreement into place with the Palestinian Authority and create the groundwork for an expulsion from Judea and Samaria, however.

Channel 10 television reported Wednesday evening that the prime minister might be indicted for suspected criminal offenses as early as Sunday, possibly pre-empting the Cabinet's planned meeting on the nascent plan for Disengagement II.

Top police investigators were slated to meet Thursday to discuss whether to recommend indicting Olmert. According to the report, there is a general consensus among the investigators in favor of filing charges against the prime minister on at least three matters, known as the "cash-stuffed envelopes," Rishon Tours and the Center for Investment.

The police are expected to recommend to the Attorney General to file the charges against Prime Minister Olmert on Sunday. Olmert has said that he would resign if he is indicted.
Posted by Unknown at 5:29 PM