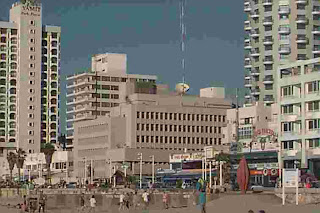 OK, now that this story is out, I'm sure the woman simply has to ask the US embassy for asylum because she probably won't be able to return to Iran at all. She took a great chance to make this trip, and probably spent her life's savings. It is not inconceivable that the police state of Iran knows exactly who she is and have probably already arrested her whole family.

The US authorities who denied her a visa should be sent to Iran for the holidays. I think they need a reality check, don't you?

As for me, I will call my representative ASAP, and I will give a call to the US embassy as well. This is so disgraceful I can't even begin to count the ways that I am ashamed of my country regarding this incident.

The US lets hundreds of thousands of Mexicans cross our border indiscriminately, and don't do anything about it, will one Persian Jewish woman who wants desperately to see her family really make a difference, even if she DOES stay? (I hope she does. No Jew should be in Iran!!)

I'm also ashamed that the embassy is still in Tel Aviv. The Capital of Israel now and forever is JERUSALEM. G-d willing, our next US president won't be a wuss and moves it where it should be.

Woman who arrived in Israel secretly planned to travel to US to meet siblings after 28 years, but American embassy denied her a visa

A Jewish woman residing in Iran recently arrived in Israel for a secret visit. The woman, who has not seen her siblings, who reside in the United States, for 28 years planned to travel to America for an emotional reunion. However, her dream was shattered after the US embassy in Israel rejected her visa request, Yedioth Ahronoth reported.

The woman arrived in Israel secretly via a European country, and planned to travel to New York for the holidays to see her siblings. After she landed in Israel, an Israeli relative who speaks some Persian accompanied her to the American embassy in Tel Aviv. At the end of her interview, an embassy official rejected her visa request.

The official said that as there was no Persian translator in the embassy, he was unable to verify her story and could not conclude that she does not intend to settle in the US. The official proposed that the woman's siblings travel to Israel to see her here.

Responding to the story, the American embassy said that in order to be granted a visa, applicants must convince embassy officials beyond any doubt that they do not intend to immigrate to the US.
Posted by Unknown at 6:44 AM