I'm not sure there is a happier way to welcome Adar than to see Beinisch step down from the bench! I just hope this isn't a Purim Prank . . .

Beinisch has been the hatchet against every religious expression, Jewish right, and Jewish Settlement in Israel.

There is no place she didn't try to destroy Israel from the inside out.  She was like a festering cancer at the heart of our homeland.

I have written about Beinisch and her disgusting excuse for "justice" over the years, and I am ELATED that she has left the bench.  (On the way out, may the door soundly hit her where the Good Lord split her!)

Unfortunately, I don't think we are done with this witch.  I have a feeling that her imperious belief that she knows far more than we mere mortals will lead her to run for office.  G-d Forbid!

If she does run for office, I pray that the voters will remember her past in high detail.  Here is a partial list, in case anyone would like to know.
(I am not privy to the full list of her transgressions . . . only Hashm has that!)

Ben-Ami says, “Dorit Beinish gave approval for his activities next to Bar-Ilan University, to incriminate someone else who would then be caught.”


I hope our country can right it self after Beinisch's attempt, for so many years, to sink us. 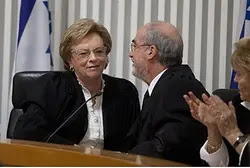 Judges Beinisch and Grunis
Press pool photo: Dudi Vaaknin
Dorit Beinisch formally ended her term as Supreme Court judge and as the court's president Tuesday, in an emotional farewell ceremony attended by the judiciary's top figures. Her replacement, Judge Asher Grunis, is to be sworn in later in the day.
Beinisch read out one of her final verdicts, in which she ruled that ownership of a car does not disqualify a person from eligibility for NationalInsurance Institute welfare stipends.
She wiped away a tear and said, "As one expects from farewells, the ceremony is not easy for me. I am saying farewell to the Supreme Court that was my home for 15 years." Tuesday is also Beinisch's 70th birthday – the age at which judges must check in their robes and retire.
Among those attending the ceremony were former Supreme Court Presidents Aharon Barak and Meir Shamgar, as well as retired judges Mishael Heshin and Yaakov Turkel.
Attorney General and Government Legal Adviser Yehuda Weinstein addressed those present and lauded Beinisch as "an example and a shining light of judgeship." He praised her "great courage" and said that "human dignity was her Northern Star."
A study published in 2010 by Prof. Aryeh Ratner of Haifa University showed a huge downward shift in the public's respect and trust for the Supreme Court in the preceding decade, which included four years under Beinisch as President. The study found that among hareidi religious Jews, trust for the top court dropped from 15 percent in 2000 to 9 percent in 2010, while among residents of Judea, Samaria and Gaza, it fell from 46 percent in 2000 to 20 percent ten years later.
Among the rest of the Jewish population, trust dropped precipitously from 61 percent to just 36 percent.
In 2011, Minister Uzi Landau said in the Knesset, "The Supreme Court's makeup has no pluralism, only Ashkenazi elitism. It is leftist, political, detached from Judaism and occasionally from reality, and allows itself to invade territory that it does not belong in."
Two weeks later, Judge Beinisch hit back at Landau in an extremely unusual speech, saying, "For several years, a campaign is being waged, which gains momentum from year to year, with the aim of weakening the judicial system and the Supreme Court at its head. This is a delegitimization campaign that is spearheaded by several politicians, MKs and even government ministers, who take advantage of their immunity to give the public false and misleading information that has devolved into incitement against the court, its judges and its judicial work."
She later reportedly made clear that she was referring to Landau.