US Looks the Other Way While Iran Engineers Destruction 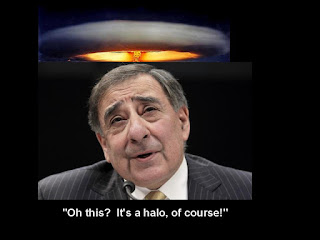 
Israel has now supplied the US government with soil samples from Iran to prove that Iran is building secret reactors.


No go. Defense Secretary Leon Panetta continues to claim that an attack on Iran's nuclear facilities could "consume the Middle East in a confrontation and a conflict that we would regret."

This begs the question:  Would Panetta "regret" a nuclear attack on Israel?
Refusing to make a choice IS a choice.  The longer the US waits and quakes in it's boots, the more sure we can all be that Khomeini will near his goal nuclear holocaust in the name of "the 12th Imam."
We all know that the US government doesn't have the B'Z to attack Iran, and that they will wait in the wings and watch as Israel does it.  "After all," they are probably thinking, "All the arabs hate Israel anyways, so nothing will change if they attack!"
What they don't realize is that things will change.  America will become an even better target for the terrorist forces of the world because arabs don't respect weakness, they respect strength.
Israel already understands that it is more important to be respected than loved.  The US may learn that lesson the hard way--led by weak-kneed patsies like Leon Panetta.
M 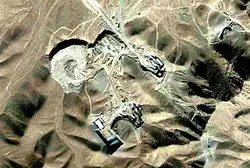 Qoms Nuclear Site
Israeli officials are again warning Washington that time is almost up, and that the Iranian nuclear threat is growing stronger -- this time based on soil samples collected near suspected sites.
Investigative reporter Eli Lake writes this week in an exclusive report published in The Daily Beast that a delegation of Israeli diplomats, IDF officers and intelligence officials raised the issue at a meeting in the U.S. capital during the annual "strategic dialogue" conference earlier this month.

Israel's presentation on the Iranian nuclear program included intelligence based on soil samples that indicated the Islamic Republic is building secret reactors to produce nuclear fuel.
Moshe "Boogie" Ya'alon confirmed in a December 24 speech in Jerusalem that although Iran probably did indeed suspend their nuclear technology activity in 2003, they resumed the drive to produce an atomic weapon by 2005.

U.S. national intelligence estimates still claim that Iran has not resumed its weaponization work -- with Defense Secretary Leon Panetta claiming an attack on Iran's nuclear facilities could "consume the Middle East in a confrontation and a conflict that we would regret."
In response, Israel cites the document recently uncovered by the United Nations International Atomic Energy Agency (IAEA) showing detailed plans for construction of a "neutron initiator" as evidence that time is rapidly running out.
As Lake explains, the neutron initiator is a pellet that sits at the middle of the nuclear core and is crushed by high explosives in a nuclear explosion. The existence of such a document is concrete proof that Iran is continuing its weaponization activity.
The November 2011 IAEA report stated plainly that intelligence shared by member states appears to show that Iran has conducted explosive tests linked to nuclear weapons research.

The stakes are high, and not all Israeli politicians believe it is clear that Israel can trust the United States when the chips are down.
As Ya'alon put it, "There is no credible military action when we hear leaders from the West, saying, 'this is not a real option,' saying, 'the price of military action is too high.'"
Posted by Unknown at 7:22 AM