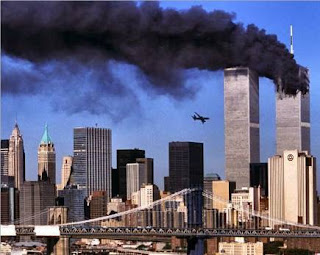 
I walked around the sofa and sat down with them. We were watching the live feed, when the second plane came seemingly out of nowhere and hit the second building.

I wasn't willing to believe what I had just seen.  It was preposterous to think that a second plane could have hit the building.  Then it dawned on me:  we were under attack.

"Oh no!  What just happened?" my oldest boy asked.

At the time I had no idea that the planes had been full of people.  I had just assumed that the planes were empty.  After all, what kind of monsters would hijack a plane and crash it into a building?

I got the kids dressed and out the door, and I went to teach my classes at the local community college.

I teach English, and my students were rattled.  I told them to process their feelings, to write about their fears and worries.  This would be a freewriting, I said, something just for you, not to turn in.

I walked quickly out the door and into the hallway, and saw the lounge filled with students, all of them with their mouths hanging open pointing at the television.  Some had tears running down their faces.  Others looked pale and shocked.

I looked up at the television at a huge billow of smoke.  "What happened? What happened?" I asked.  "Did it burn down?"

"No," one of the students answered.  "It just came down."

I looked up at the television in hopes that the reporters and news anchors could answer my questions, and then, I watched as the second tower pancaked into itself.  People were running and screaming.

I sat down on one of the chairs, completely forgetting about my class for a moment.  I couldn't believe what I had witnessed.

I ran back into my classroom and tried to keep the panic out of my voice, "Please, I don't want to interrupt you, but the towers, they are gone.  I don't think we should stay in class.  I think you need to see what is happening."

My students were as confused as I had been.  "Just go to the student lounge and watch," I said.  "If you have children, maybe you should go home to them.  If you have family, go and comfort them now.  We shouldn't be here."

After I dismissed them, I sat down in the lounge to watch the television when the department chair came up to me.  She and I never liked each other.  She had, in fact, been my enemy from the start.  I thought to myself, "Oh my goodness, she is going to come and tell me I shouldn't have let my class go.  What a b***h."

As she got closer, I saw the tears in her eyes.  "Did you let your class go?" she asked.

"Did you see the towers come down?"

I was touched by this, more touched than I would have been if she had been a friend.  It was a moment of humanity exchanged between two people who had been locked in conflict for years.  I hugged her, and cried.

I was haunted by the idea that the planes were full of families, and I thought about what it must have been like those last few moments.

Parents must have been trying hard to stay calm, reassure their children.  Maybe they cradled their small children in their arms, feeling the tiny warm body against theirs, knowing it was their last moments of life.

That idea still haunts me, makes me suddenly hug my 15-year-old, or call my mother.  Life is so precious, so fragile.
Posted by Unknown at 7:27 AM