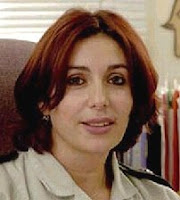 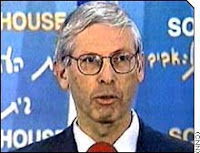 I'm not sure if I like this list or not. Likud looked to be regaining it's soul with Begin, but the inclusion of the doves Hefetz and Dayan really weakens the ticket.

I don't think Israel needs a moderate party right now. We need a strong right wing party that will give strength to the nation by recognizing its ancestral ties to the land, its religious heritage, and its strong military traditions.

We have to stop this kowtowing to the arabs and build our nation back into a regional powerhouse.

(IsraelNN.com) MK Effie Eitam announced on Sunday that he wishes to join the Likud party. Hours earlier, the Likud thought he would not join because the party's right wing image had been bolstered by Benny Begin's return to political activity.

Eitam informed heads of the National Union-NRP on Sunday that he would not join the new Rightist list they are planning to establish. He explained that the proposed party's list would be chosen by committee and not by primary elections because of a religious nature not open to all streams of thought.

Eitam is a highly decorated former soldier and a Brigadier General (res.) in the IDF.

Begin joins
Dr. Benny Begin announced on Sunday that he will leave his job as head of the Geological Institute and will vie for a spot in the Likud's list of Knesset candidates for the upcoming elections.

As Keren Neubach put it on her talk-show on government-managed Voice of Israel's Second Channel on Sunday morning, after a political commentator said that Begin would be the most hawkish name on the Likud list: "Yes, but on the other hand, his character is incorruptible." A request for a clarification as to whether she views the two traits as mutually exclusive, posted on her show's forum, has not yet been addressed.

Begin was a three-term Knesset Member, from 1988 until 1999, and served briefly as Minister of Science under Prime Minister Binyamin Netanyahu. In late 1998, he resigned from the Likud in protest of Netanyahu's Wye Agreement, and re-started the Herut party in order to run for Prime Minister.

Herut (Freedom) was the name of the movement long headed by his father, Menachem Begin, and which was the forerunner of the Likud. The party united with the Tekumah and Moledet parties to form the most right-wing nationalist party in the elections. However, the party received only four seats in the elections, and Begin resigned in disappointment. "I am a public figure without a public," he said at the time.

Begin returned to the Likud four years ago, and is now returning to active politics. Likud members welcomed him, in the knowledge that his name and reputation are an electoral asset. MK Gideon Saar, the Likud's faction whip in the Knesset, said, "Begin will be a tremendous addition. He is a symbol of values, ideology, clean hands and clear thinking."

Other Likud Acquisitions
Former Chief IDF Spokesperson Miri Regev has also announced that she is joining the Likud. She earned praise for her spokesmanship during the Disengagement.

Two other public figures who are strongly considering joining the Likud are former IDF Chief of Staff Moshe (Bugi) Yaalon and former MK Dan Meridor. They have elicited opposite reactions in the Likud, however. Yaalon is being warmly welcomed, and is even likely to have a spot reserved for him on the Likud list, largely because of his pro-Land of Israel views and positive character. Meridor, however, joined the left-wing Center Party after quitting the Likud in 1999, and is blamed for having sharply maligned the Likud in the 1999 elections. Meridor is not likely to have a spot reserved for him, and is not interested in actively competing for one.

Former MK Uzi Landau, who served under Netanyahu as Public Security Minister, is also considering re-joining the Likud and running for Knesset.

Netanyahu has thus put together a sizeable list of public figures who have joined the Likud in recent months, or are strongly considering doing so. These include former Police Commissioner Assaf Hefetz and former Gen. (ret.) Uzi Dayan, neither of whom are considered to be supporters of Jewish sovereignty in Judea and Samaria.
Posted by Unknown at 6:27 PM