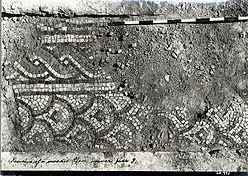 This doesn't surprise me in the least that the Aksa Mosque may be built upon an early church. It seems that every Mosque is built upon another house of worship, and it makes sense, frankly. The xtians built their churches on top of other houses of worship as well, didn't they?

If your religion is one that seeks converts, and if you are of the sincere belief that your religion is superior to the religion of another, and if you wish to show dominance in order to sway the people to your religion, one of the most obvious and symbolic things you could do would be to take over a traditional religious site and put your house of worship right on top of it.

This is also what the Romans tried to do to the Temple, correct? They went in and put the statues of their pagan gods up in the Temple--which was much worse than anything else they could have done.

The question I have, however, is why a archaeologist would have hidden or omitted what he found under the Aksa Mosque. What kinds of pressures were upon this archaeologist to keep him from making a complete report? What was his motivation for ignoring the basic truth of his find?

I think these are far more interesting questions than whether a mosque is built on top of a Mikvah or a church!

The photo archives of a British archeologist who carried out the only archeological excavation ever undertaken at the Temple Mount's Aksa Mosque show a Byzantine mosaic floor underneath the mosque that was likely the remains of a church or a monastery, an Israeli archeologist said on Sunday.

Excavations under the Aksa Mosque in the 1930s, photographs of which were recently uncovered, revealed a Byzantine mosaic floor.

The excavation was carried out in the 1930s by R.W. Hamilton, director of the British Mandate Antiquities Department, in coordination with the Wakf Islamic Trust that administers the compound, following earthquakes that badly damaged the mosque in 1927 and 1937.

In conjunction with the Wakf's construction and repair work carried out between 1938 and 1942, Hamilton excavated under the mosque's piers, and documented all his work related to the mosque in The Structural History of the Aqsa Mosque.

Hamilton also uncovered the Byzantine mosaic floor and beneath it a mikva (ritual bath) from the Second Temple period, which he pointedly did not include in the publication about the mosque, but instead photographed and labeled in a file about the mosque, archeologist Zachi Zweig said on Sunday.

Zweig uncovered the photographs in the British archeological archives that are kept at the Antiquities Authority in Jerusalem.

The Byzantine mosaic floor, which was uncovered under the Umayyad level of the mosque, is "without a doubt" the remains of a public building - likely a church - which predated the mosque, Zweig said in an address at a Bar-Ilan University archeological conference.

A similar mosaic can be found at the Church of the Nativity in Bethlehem, he said.

"The existence of a public building from the Byzantine period on the Temple Mount is very surprising in light of the fact that we do not have records of such constructions in historical texts," Zweig said.

Over the last several years, numerous marble church chancel screens have been uncovered by Zweig and Bar-Ilan University archeologist Dr. Gabriel Barkay from rubble that was dug up during Waqf construction at the site in the last decade and dumped in the Kidron Valley.

The mosaic found on the Temple Mount is dated to the fifth to seventh centuries, said Dr. Rina Talgam, a mosaic expert at the Hebrew University of Jerusalem.

"We were very surprised by the discovery of such a mosaic on the Temple Mount," Talgam said, noting that it contradicted the testimony of pilgrims who described the site as deserted in the Byzantine period and was also unlikely to have been part of the earliest mosque at the site, in the Early Islamic period, since that structure was made of wood.

"The simple mosaic pictured does not give us a hint that it was certainly part of a church but it very well could have been part of a hostel or some other nondescript structure," she said.

Since the establishment of the state, no archeological excavations have been held on the Temple Mount, in keeping with religious sensitivities of both Muslims and Jews.

"It is hard to establish with certainty that this was indeed the site of a church, but without a doubt it served as a public building and was likely either a church or a monastery," Barkay said.

He called the discovery of the photographs in the British archives both a "sensational" and "important" find.

"This changes the whole history of the Temple Mount during the Byzantine period as we knew it," he said.
Posted by Unknown at 2:49 AM