Light a Candle Tonight For Israel's Other Assassinated Leader 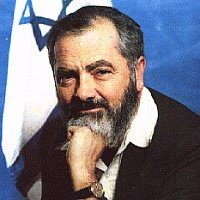 One stood for "peace at all cost" and tried to give away as much of Israel as he could, honestly believing that our enemies would give peace in return.

One man's killer was jailed, his life spent behind bars.

The other man's killer was found innocent of a murder against the weight of the evidence in a trial whose defense was paid for by no less than Osama Bin Laden.

One man has a day named in his honor, and all the Israeli schools are required to teach about his life and death.

The other man's name is dangerous to speak, so dangerous that if one speaks it, the government will send goons in the middle of the night to throw your family in the cold, separate your young children from their mother, and destroy your home with all its contents. If you speak his name you are prevented from holding public office, being admitted to the bar, or even living in the land without harassment. You also are in danger of the US government calling you a terrorist and destroying your life in America.

Both men were victims of murder, of assassination. They are both heroes to different parts of the Jewish public--but because of politics, because of our wish to commit national suicide by proxy, because of our nation's failed political, social, and religious policies, only one is honored by the nation. He is honored with political speeches, the stage crowded with those who want their name associated with "peace at all costs," his name in lights, with balloons and concerts, as Jews speak Loshan Hara against their own brothers and sisters, calling them cancers and tumors and promising their erradication.

The other is honored quietly, solemnly, and reverently. His name is said in whispers and his life and death remembered by those who love the land of Israel and remember that his death has never even been properly investigated. They know that Jews, REAL Jews are never safe. They know they cannot depend upon governments or princes, but only upon HASHM.

For those people, tonight is the night to share the sorrow of loss and to recall the strength of remembering. Tonight is the night where a quiet candle will burn in the name of Rabbi Meir Kahane, and those who love the land and Hashm will vow to never forget.

(IsraelNN.com) This evening in Jerusalem a memorial service will be held for the late Rabbi Meir Kahane, the founder of the Jewish Defense League (J.D.L.), who was assassinated 18 years ago. Rabbi Kahane also did much to free Jews from the U.S.S.R. during the years of the Iron Curtain. He was also the personality around which the Kach Knesset party was formed, that favored ending terrorism by transferring offending Arabs.

At 4:30 p.m. there will be a smaller, grave side ceremony on Har HaMenuchot. The larger public gathering will be at 6:30 p.m. at the Heichal David hall, in the Romema neighborhood.

Romema is located between the entrance to Jerusalem and the Mattisdorf neighborhood.
Posted by Unknown at 6:51 AM