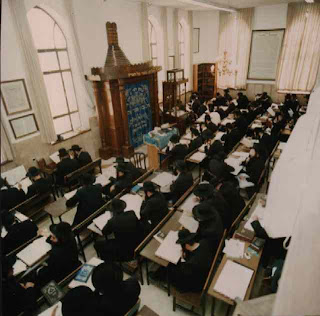 WOW. This is really really good. I wish I had written it. It is a very good argument about why the Kollel system is so messed up, what needs to be done, and what the REAL tradition of Jewish study has been (you know, before the Shas weenies rewrote it).

Torah Scholars should not be welfare cases. They should not be sad poor beggers. They should be men of the world, accomplished men, who study for study's sake--not for the sake of avoiding work and army service--which is what many are beginning to think it has become.

The global financial meltdown's spread to the sources of funding on which this country's haredi institutions depend is proving the mishnaic axiom that "when there is no flour, there is no Torah." As The Jerusalem Post reported last week, the well of foreign donations that keeps kollelim, yeshivot and other haredi institutions afloat is running dry, sending full-time scholars out into the job market. The story of Tuvia, a 20-year-old hassid from Jerusalem who chose to operate a machine at a drug company rather than face the threat of choking poverty, was indicative of the changes under way.

The current crisis, though, is ironic - for, as the mishna above continues, "when there is no Torah, there is no flour" (Avot 3:21). Yet today, even as Torah study is on the rise, the financial well-being of the Torah-studying world faces a precipitous decline. Something is amiss.

Many haredi leaders would respond to such a paradox with a call to greater devotion - in study, in prayer and in deeds. Yet, again, this would ignore the glaring contradiction between the increasing strictness of religious observance and lengthier commitment to Torah studies among the haredim and this sector's worsening financial straits. The contention that this suffering would be alleviated through divine recompense if only young men would concentrate more on their Gemaras can only bear so much of the strain of observable fact before it shatters. Tuvia the machine operator is just one example of what happens when it does.

Heavenly judgment notwithstanding, poverty among haredim is almost entirely self-inflicted. Only about half of haredi men and women of working age are employed - some 30 percentage points lower than the figure for non-haredi Jews - and the jobs they do hold tend to be in lower-paying sectors. The haredi community, therefore, is unable to independently fund its kollel system and relies heavily on donations from abroad. Considering how impossible this equation is, the only thing that is surprising about this crisis is that it hasn't come sooner.

FOR ALL those who have watched with concern while the haredi community's singular devotion to Torah studies has pushed it deeper and deeper into poverty, the impending collapse of the kollel economy is good news. Not, God forbid, that anyone should take pleasure in the distress of others, or in the thought that Torah learning may decrease. Rather, it is good news that what has been painfully obvious to so many outsiders may finally be sinking in among stalwart proponents of the widespread kollel culture that has created this catastrophe: that the system is broken, and demands repair.

The first step is to recognize that the kollel paradigm currently in vogue is a deviation from traditional Jewish norms. It is only recently, with the advent of the welfare state and other social changes, that the large-scale subsidization of long-term Torah study has taken hold. Yet even in other times and places, when wealthy patrons could have been relied upon for support, the vast majority of Torah scholars did not accept payment either for teaching or for studying holy texts.

As Rabbi Dovid Rosenfeld has noted in his commentary on Pirkei Avot: "While in Temple times, scholars had either supported themselves, or been paid a pittance out of Temple funds, during the Yavne period a policy emerged of encouraging the community to regard the support of the sages as a religious-communal function."

Even so, Rosenfeld continues, "many scholars still plied their crafts as cobblers, smiths, scribes, etc., supporting themselves in this way in their spare time. In principle the scholars accepted no remuneration for their communal activity, or for the instruction they gave, and certainly not for studying. The ideal was that a scholar 'should study for the sake of heaven' and live from his own toil" (Tanna de-bei Eliahu 5:2).

Of course, there have been a number of outstanding rabbis who have devoted themselves entirely to Torah study and teaching, including the gaonim of Babylonia. But they have been the exceptions to the rule. Throughout the centuries, the greatest figures in all of Jewish scholarship worked for a living.

Many a brilliant scholar employed his faculties in a position of prominence. Avraham Ibn Ezra, the Rambam, the Ramban, the Ran and Ovadia Sforno were physicians. Bahya ibn Pakuda, the Ravad and the Ralbag were philosophers, astronomers, mathematicians and judges. Rashi, Rabbeinu Tam, the Rashba and Yitzhak Ben Yehuda Abravanel were deeply involved in finance.

Others engaged in simpler occupations. The Amoraim Rava, Abbaye, Abbahu and Hama traded wine and other goods. First-century Tanna Abba Shaul Ben Batnit was a shopkeeper in Jerusalem. The Hafetz Haim, refusing to make the rabbinate his livelihood, helped his wife maintain a small grocery.

Babylonian Amora Hisda became very wealthy as a brewer. Abba Shaul was a baker. The Rashbam was a sheep farmer. The great Italian mystic Ramchal earned a living as a diamond cutter.

Some, despite their exalted status in the study hall, earned their living through difficult or humble jobs. Honi Hame'agel, the renowned miracle worker from the period of the Second Temple, repaired roofs for a living. The Amoraim Hanina and Hoshaiah were cobblers. Some sages even tanned hides, despite the odiousness of the job.

WERE THESE men greedy for material gain? Were they inferior in faith and constitution to the young men of today, who spend their days and nights in kollel in exchange for meager stipends? The mere utterance of such a thought in today's Jerusalem or Bnei Brak would be scandalous.

What, then, motivated our greatest scholars to toil? Their scholarship, evidently.

Although the Talmud is replete with admonitions to study Torah diligently, its pro-work ethos is overpowering.

"The primary thing is not study," they add in Avot 1:17, "but action." Going further in Avot 2:2, Rabban Gamliel, the son of Rabbi Yehuda Hanassi - the very redactor of the Mishna - says, "Good is Torah study together with a worldly occupation, for the exertion in both makes one forget sin. All Torah study without work will result in waste and will cause sinfulness." To make this message unequivocal, they admonish in Pessahim 113a: "One should flay carcasses in the marketplace and earn a living. He should not say, 'I am a priest, [or] I am a great man, and such work is beneath me.'"

In terms even stronger still, the Rambam writes, in his Mishneh Torah: "Whoever thinks he will study Torah and not work, and will be supported from charity, profanes God's name, shames the Torah, darkens the light of knowledge, causes harm to himself, and takes his life from this world, for it is forbidden to derive benefit from the Torah in this world."

"Do you think," the incredulous kollel student might well ask, "that our Torah sages of today are unaware of all these things?!" To which we would respond, of course not! Indeed, that is what is most troubling: that, in essence, today's haredi leaders have overruled practically every giant of Torah knowledge who has ever lived. And the consequences have been dire.

By encouraging more and more able-bodied young men to delay their professional careers, and by discouraging them from pursuing the broader technical knowledge that would improve their chances of earning a respectable wage, they have condemned hundreds of thousands of men, women and children to destitution. So, too, they have denied the working man the dignity and the sanctity with which our earliest sages invested him. Yet they rely completely on the work of his hands and eat bread by the sweat of his brow.

This problem will not be solved until paid kollel studies are limited to only the most promising of students. Doing so would allow for these students to be provided with higher stipends, which would both ease their economic hardship and more accurately reflect the value that the community places on advanced Torah scholarship. (At the same time, they ought to be required to perform some kind of community service, outside their studies.)

But what of the rest of the students, who would be sent out of the kollel? They need not abandon Torah study altogether - only combine it with professional training, followed by gainful employment. This would ease the financial pressure on them and on the rest of the community, ensuring the security of institutions of higher learning and freeing up resources for those truly unable to provide for themselves.

Defenders of the current paradigm will no doubt marshall all manner of arguments to justify its perpetuation. But resisting these critical reforms can only mean one thing: neither flour, nor Torah, for years to come.
Posted by Unknown at 6:04 PM