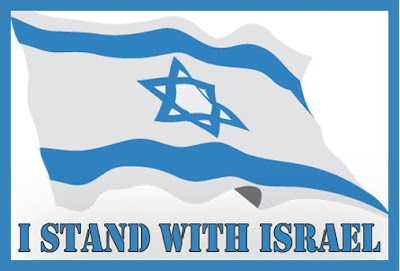 Well, gee. I wonder why this would be the case? Maybe because Judaism predates Islam by a few thousand years? Perhaps because the Jewish claim to the land is in every Bible? Or, maybe it is because Israel has bent over backward to try to make peace and has only gotten war in return?

I'm sure the people at CAIR will discount all of that and say it is only because the American people are bigots.

That's the easy answer, but not the real answer.

The real answer is that Israel is not only historically and politically correct in her claims to the land, she is also morally and religiously correct.

The "palestinian" people are a made-up ethnicity used, politically, to try to destroy Israel. Their lies are obvious and so shallow that they cannot hold up to any inspection at all.

You may have convinced a hand-full of uneducated unwashed college freshman, Mr. Abbas, but the rest of us know what you are about.

Only 6 percent of Americans think the United States should stand behind the Palestinians in Middle East peace talks, according to a recent poll of voters conducted by Public Opinion Strategies and Greenberg Quinlan Rosner Research and commissioned by The Israel Project.

Comparatively, 66 percent of those polled said the U.S. should support Israel in the peace process. Some 80 percent of GOP voters and 59 percent of Democratic were among those backing U.S. support for Israel.

Despite "all the problems America now faces at home," 58 percent of those polled agreed more with the statement that "America needs to stand with Israel" than with "Israel needs to take care of itself."
Advertisement
Of those polled, only 19 percent think "making peace between Israel and the Palestinians" should be among President-elect Barack Obama's top foreign policy priorities.

Almost two-thirds of Americans said they were more concerned about the nuclear standoff with Iran; some 72 percent of those polled agreed with the statement that "even with all the problems that America faces at home now, we must still work hard to stop Iran from getting nuclear weapons."

When asked what the next president should make as his top priority in foreign policy, 56 percent mentioned "ending the war in Iraq" and 41 percent said "restoring global economic growth."

Another 35 percent said Obama must focus on "defeating Al-Qaida and the Taliban," while 33 percent listed "preventing Iran from getting nuclear weapons" as one of the most important tasks facing the U.S.

Meanwhile, 15 percent believe the U.S. must work on "dealing with the instability in Pakistan," while 8 percent are worried about ?meeting the threat of Putin?s Russia."
Posted by Unknown at 3:34 AM