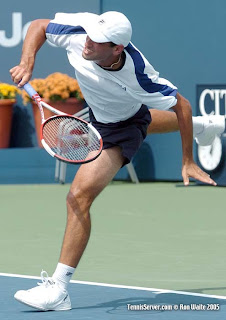 OK, so the women of tennis will allow one of their own to be horribly discriminated against and say NOTHING and do NOTHING--why am I not surprised?

And, the WTA will say NOTHING and do NOTHING to help Shahar Pe’er.

BUT, when an American politician gets involved, suddenly Dubai will allow an Israeli Man in (I guess he wasn't as horrible as that terrible women's tennis player?).

Kudos to U.S. Congressman Anthony Weiner (D.-NY) for standing on his integrity.

Kudos to the WJC and the Conference of Presidents of Major American Jewish Organizations and the Wiesenthal Center for Speaking up.

MAJOR KUDOS to the Tennis Channel for refusing to air the event, and Kudos to The Wall Street Journal Europe for dropping their sponsorship of the tournament.

This is all after the fact, though. It just isn't enough.

In fact, a Los Angles Jewish newspaper even has the GALL in their cover story today to say that we should all just "get over" our hatred of Wagner. After all, he has some nice music, right? Let's just overlook the fact that he hated Jews and wanted us destroyed and that his music is forever linked with the destruction of our people through Hitler. We don't have to think about that because it is over, right?

Seriously, folks, this is a serious issue that must not be ignored.

Every issue of anti-Semitism is a serious issue that cannot be ignored.

I am hoping the men, at least, will stand with Peer and refuse to play.

(IsraelNN.com) Dubai will allow male Israel tennis player Andy Ram to enter the country and compete in a tournament. This occured in the wake of Dubai’s earlier refusal to issue a visa to the female Israeli tennis champ, Shahar Pe’er. Dubai’s move of banning Pe’er was met with a storm of international protests earlier this week.

U.S. Congressman Anthony Weiner (D.-NY) said that he told the United Arab Emirates (UAE) ambassador to the United States that banning Pe'er was a setback for its nation.

"Over the last several days I have had a series of conversations with Ambassador Yousef Al Otaiba about the very troubling steps taken by the United Arab Emirates government to deny an Israeli tennis player a visa to play in the Dubai Tennis Championship," said Weiner in a statement Wednesday. "I made it clear that I felt this was a setback for a nation that had made commendable efforts to foster understanding and tolerance."

As a result of the talks, Al Otaiba has assured Weiner that Andy Ram, the male doubles player, will be allowed to compete in Dubai.

The United Arab Emirates, which has no diplomatic relations with Israel, recently denied Shahar Pe'er a visa for the tennis tournament. The rejection of the tennis player’s visa application violates WTA rules, which state that no host country should deny a player the right to compete at a tournament for which she has qualified by ranking.

The issue whether Pe’er would now be issued a visa is academic, since she has already missed playing in the women’s tournament, which began this week. “It was my sense from the ambassador that he was looking to do the right thing, but that’s small consolation to Ms. Peer. He understood that they had made a mistake and they had a public relations problem,” Weiner mentioned.

Jewish groups, including the Conference of Presidents of Major American Jewish Organizations, had previously called for the Women’s Tennis Association (WTA) to sanction the United Arab Emirates at its board meeting last weekend for its failure to allow Shahar Pe'er to participate in this year’s Barclays Dubai Championship.

The Tennis Channel has refused to broadcast the tournament because of the Pe'er visa refusal, and The Wall Street Journal Europe announced it was dropping its sponsorship of the tournament.

Dubai’s claim that it was concerned with Pe’er’s personal security aroused suspicion among the members of the umbrella group of 51 American Jewish organizations. “The excuse that the UAE was concerned about Ms. Pe'er’s security is spurious. Any country that cannot assure the security of all players in a tournament should not be allowed to host it,” the organization said in a statement.

Dubai tournament organizers said on Tuesday that had Israeli tennis champion Shahar Pe'er participated in its women’s championships, local tennis fans would have boycotted the games. In addition, they expressed concern for her personal safety.

"Public sentiment remains high in the Middle East and it is believed that Ms. Pe'er's presence would have antagonized our fans who have watched live television coverage of recent attacks in Gaza," stated tournament director Salah Tahlak, who added, “We don’t wish to politicize sports.”

Meanwhile, World Jewish Congress president Ronald Lauder stated, "It is scandalous that some governments mix up politics and sport," referring to similar events in the past where Muslim countries banned Israeli players from competing.
Posted by Unknown at 5:58 AM