"If the Pope wants to do some good for the Church, he should leave his job." 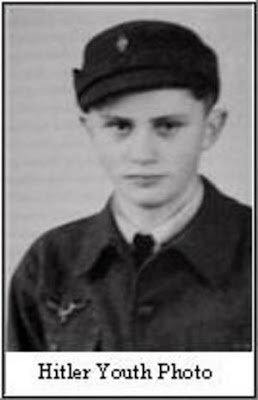 Well, I guess the Catholic Church has to admit that their "emissary on earth" might be a lot less perfect than they want to admit.

I think his anti-Semitic credentials were well established before this, when he wanted to cannonize the evil and completely vicious Ferdinand and Isabella. Then, of course, start sainthood proceedings for the Holocaust Pope, who decided that keeping his mouth shut and letting 6 million Jews die was a lot more appealing than putting any of his people in the position of being martyrs to the cause of justice, mercy, and goodness.

And, of course, there was that little incident with reinstating the prayer for the conversion of the Jews. Ah, but that was such a small thing, right?

For goodness sakes! What else could we expect of the former Hitler-Youth-Turned-Pope?

It is just one more thing is a whole line of anti-Jewish actions on the part of this monster.

Even if the Catholic church doesn't want to admit it, his record since taking his post speaks volumes.

Why is anyone surprised that he would welcome a Holocaust denier into the loving arms of the Church?

M
-----
'Errors' cited in Holocaust denier's pardon
POPE UNDER FIRE (Or, at least he will be if the Catholic Concept of Purgatory is accurate!--M)
http://digital.nationalpost.com/epaper/viewer.aspx

A senior Vatican official yesterday acknowledged "management errors" in the decision to lift the excommunication of a Holocaust denier as attacks on the Pope's ruling continued to escalate.

Pope Benedict "wanted to open the debate because he wanted unity inside and outside," a cardinal says.

Criticism following the Pope's announcement last month has been particularly cutting in Germany, where denying the Holocaust is a crime punishable with a jail sentence.

"If the Pope wants to do some good for the Church, he should leave his job," eminent liberal Catholic theologian Hermann Haering told the German daily Tageszeitung.

"That would not be a scandal, a bishop has to relinquish his position at 75 years, a cardinal loses his rights at 80 years." Pope Benedict is 81. Werner Thissen, Archbishop of Hamburg, said the Pope should have lifted the excommunication of Bishop Richard Williamson only if he had recanted his "unspeakable" claim the Nazis did not use gas chambers.

"There is obviously a loss of confidence [in the Pope and] rehabilitating a denier is always a bad idea," he said.

He criticized the Vatican's "sloppy" handling of Bishop Williamson's rehabilitation, which has incensed Jewish groups and moderate Catholics. Lifting the excommunication, imposed 20 years ago, has proved a public relations disaster for the Vatican, which underestimated the anger the move would arouse.

"A pardon that tastes of poison," Franco Garelli, an expert in religious history, wrote yesterday in Italy's daily La Stampa.

A senior Vatican official acknowledged the Vatican administration may have made "management errors" with the decision to lift excommunication against four bishops, including Bishop Williamson.

"I observe the debate with great concern. There were misunderstandings and management errors in the Curia," said Cardinal Walter Kasper, who is in charge of the Vatican department that deals with Jewish relations.

"The Pope wanted to open the debate because he wanted unity inside and outside," the German cardinal told Vatican Radio.

He also noted "these bishops are still suspended."

Rate This Article!
Posted by Unknown at 6:57 AM