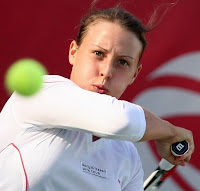 Despite what they would all like you to think, the fact that Peer has been refused a visa from Dubai has nothing to do with the Gaza War. "It is Because of the Gaza War" has become an overarching excuse given by all the anti-Jewish forces in the world in the past few months, and frankly, it is a complete lie.

Dubai is one of the members of the United Arab Emirates, and as such, bans all entry to Israeli citizens. It also bans all entry to those who have visited Israel and have an Israeli visa stamp on their passport.

This is not something since the Gaza war, this is the case in most arab countries . . . unless, of course, you are a well known architect they need to build a twirling tower for their arab heaven on earth. I guess that is the exception.

Of course, they might make a "last minute exception" for Peer, but it is unlikely. And, even if they did, none of her Jewish fans would be permitted to see he play anyway, as they wouldn't be allowed to enter the country.

I guess the ball's in their court now. Will the WTA do the right thing and cancel the tournament? Stay tuned!


An Israeli tennis star, fuming over being banned from a tournament in Dubai, said yesterday that politics should have no place in sports.

"I think a red line has been crossed here that could harm the purity of the sport and other sports," said Shahar Peer, who is ranked No. 48 in the world.

Peer, 21, was set to fly into the United Arab Emirates Sunday for a Women's Tennis Association tournament, until she was informed Saturday night that she would not be granted a visa. Peer's appearance in the Arab nation, which does not recognize Israel, was the subject of much speculation in the weeks since fighting escalated in the Gaza region.

Last month, during a tournament in Auckland, New Zealand, Peer faced about 20 demonstrators protesting Israel's three-week Gaza incursion. They were removed before Peer played her match.

But the move by Dubai rattled her.

"They really stopped my momentum because now I'm not going to play for two weeks. And because they waited for the last minute, I couldn't go to another tournament either," Peer told CNN from Tel Aviv. "So it's very disappointing and I think it's not fair. I don't think it should happen. I think sport and politics needs to stay on the side and not be involved. I really hope it's not going to happen again, not only to me but to any other athlete."

Peer's brother said she applied for a visa months in advance and was assured by tournament organizers that she would be allowed entry. Peer said she has received calls from other players expressing their support.

"It's not acceptable," top-ranked player Amelie Mauresmo said after clinching the Paris Open title on Sunday. "I think sport should be above issues like that to do with religion and wars and whatever. I'm surprised."

French Open champ Ana Ivanovic, who is in Dubai, said, "I feel very sorry for her. Shahar is a friend of mine and I feel sorry she's not here."

WTA Chief Executive Larry Scott said the tour was "deeply disappointed" by the ban, and observers noted that the future of the $2 million tournament remains uncertain in the wake of the decision.

A tennis official said the men's tour would also review the status of its Dubai tournament, which is due to begin next Monday.
Posted by Unknown at 4:25 AM