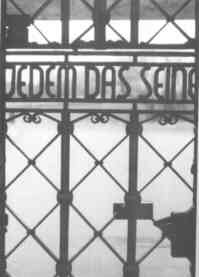 I am so happy that someone said this. Thank G-d it was also a well-known Rabbi.

I’m sure he will be roundly attacked by all of those Jews who have replaced their Judaism with “Holocaustism.”

The Jews who practice Holocaustism are Jews who have replaced the mitzvot of Shabbat, Kashrut, and Family Purity with “Holocaust Studies,” and the "March of the Living” to Poland.

They draw their identity from the deaths of others rather than the living Torah. They mourn the loss in Europe, but they vote for the destruction of Jewish homes in Israel.

They are the completion of Hitler’s plan, but they don’t know it. This is the sadness. They have given up on G-d. They have forgotten the beauty and the happiness of living as a Jew and they have replaced it with a memory of death and tragedy. They have stopped being Jews.

Every time a Jew violates Shabbat—Hitler has won.

Every time a Jew eats non-Kosher food—Hitler has won.

Every time a Jew fights against Israel’s right to exist—Hitler has won.

Every time a Jew marries a non-Jew—Hitler has won.

Every time a Jew forgets the obligation of Prayer—Hitler has won.

The things I like about Rabbi Aviner’s statement are threefold.

First, I like that he said that we should be in Israel and should not leave the land unless we are performing a Mitzvah. Although I am not in Israel, I still recognize the significance of being in Israel and the importance of remaining in the land. I look forward to the day I will join my brothers and sisters there, and I love that my husband and I have helped others to realize this dream.

Yes, I understand that we must honor the memories of those who perished, but what better way than to remember them, light a candle for them, pray for them from the heart of Israel? We don’t go to the spot where someone was murdered to honor them, that would be--and is--disrespectful to their memory.

Lastly, I love what he said because he has made the case that we should not support those who would make money off of the tragedy of lost Jewish lives.

These people, and their parents and their grandparents stood by and watched Jews die. Sometimes they did the murders themselves. They were complicit in the genocide. Now, they stand at the same gates that swallowed our people, and they perpetuate the evil—pretending that this place of murder is a shrine to their memories. Would I want such a shrine to my memory? Never. G-d forbid that a Nazi death camp should become a shrine! This is Idol Worship of the worst sort!!

These Polish tour guides, trinket sellers, and vendors are worse than carrion eaters. At least the animals who eat carrion stop when the bones are gone. These Poles never stop. They eat from the very souls of those they helped to kill. They are below the bottom.

Thank you, Rabbi Aviner! You said it. You are courageous and smart. You are honest and truthful.

Educational school trips to the Nazi death camps in Poland have become common among most Jewish sectors in Israel, but prominent Zionist Rabbi Shlomo Aviner recently claimed that they are in fact forbidden for halachic reasons, and urged schools to cancel them.

Answering a reader's question on the subject in the religious "Ma'ayaney Hayeshua" journal, Aviner stated that trips to Poland were "not good" due to the halachic ban on leaving Eretz Israel, and because they "provide livelihood to murderers."

In a conversation with Ynet, Aviner explained: "As is well known, leaving Israel is permitted only for the sake of mitzvah, while visiting the death camps is not defined as a mitzvah by the Halacha. There are important figures and great rabbis who have not visited there.

"Clearly what happened in the Holocaust must be remembered, but this can be done using films, books, the Yad Vashem museum and there are even the testimonies of survivors who are still alive," he stated.

And what about the emotional experience?
"I once told educators that in any case the impression vanishes after six months, like any other emotional experience with a short shelf life. They smiled and said that it actually fades away after three weeks."

Aviner also said that the trips have not been proven to have an "educational value." "For some this experience is very difficult and they come back utterly distraught," he added.

'Why should Nazi collaborators benefit?'
Another argument against visiting the camps, according to the rabbi, was the fact that the Polish people "collaborated with the Nazis" and were now making a living off of these visits. "I'm not busy holding a grudge against the Poles, but we shouldn't provide livelihood to people who allowed death camps to be built on their land and who are now making a profit out of it.

"They are not my friends and I don't want to support them."
According to Aviner, it was not accidental that the Nazis chose to erect the extermination camps in Poland. "They knew that the people would do nothing. One person was enough to blow up the railroad tracks. Why wasn't this done? Because they all said, 'good,' smiled and waited for what needed to be done to be done by the Nazis.

"Many Jews who escaped from the camps were later murdered outside by the Polish resistance. When the Jews came back to the city their houses were inhabited and they faced a pogrom. To this day trials are being held against Poles who stole houses," he concluded.
Posted by Unknown at 11:34 AM