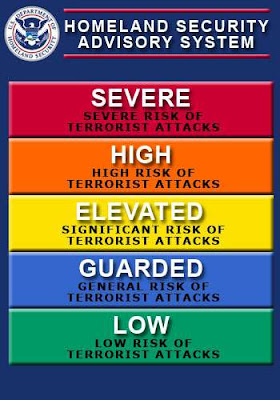 I was talking to my son in Jerusalem about how stupid so many of our fellow Americans are regarding terrorist threats. They don't have the slightest idea how to react in a situation, they don't know what to look for, and they are too willing to overlook something like an unclaimed bag or a suspicious-looking person. Even the US government website is woefully inadequate--so vague and general that it provides almost no assistance in preparing for, recognizing, or reacting to a terrorist threat. The National Terror Alert website is a bit more specific and helpful, but the best advice came on the eHow website. How to Recognize Potential Terrorist Behavior, and How to Plan for a Terrorist Attack were mature, helpful articles about specific ways in which to deal with terrorist threats.

It's such a strange culture in America. If you think it is important to pay attention to the potential of terrorist attacks, people treat you as if you are some paranoid crazy person. Additionally, if you try to do a search for information about how to prepare for or react to a terrorist attack, mostly you will find humor.

Humor has its place, no doubt, but when we are faced with a terrorist threat as a very real and present danger, what we don't know could kill us. Most of us could use a good-old-fashioned primer in the basics of what to do and NOT do (for example, if someone sends you a letter with white powder in it, don't take it to your supervisor and ask what to do! You will contaminate the entire office!!).

I am praying that we will escape a catastrophic terrorist attack, but I know and you know that "catastrophic" is a relative term. Any attack is catastrophic when you care about the sanctity of human life.


JERUSALEM – A U.S. jihadi website has issued a series of videos targeting the New York headquarters of Chabad, a Jewish outreach movement, just two months after the group was rocked by a deadly terrorist attack in Mumbai, India.

The videos also ask viewers to "give the Islamic message" to Yeshiva University, a Manhattan-based Jewish college, as well as "Jewish Federation buildings all over the U.S." in response to the institutions' purported funding for Israel amid its recent offensive against Hamas in the Gaza Strip.

The Islamic threats already resulted in a New York Police Department investigation and a beefed-up police presence outside the Chabad headquarters, WND has learned.

"When an atrocity is done like what was done in Gaza, indiscriminately killing women and children, we know who the source is," stated Yousef Al-Khattab, the CEO of RevolutionMuslim.com in a video address posted on the website.

"These are definitely the sources," Khattab stated, citing Chabad and the other Jewish institutions.

"We think it's imperative to hold these people responsible, speak in front of their homes, give them the Islamic message. Leave them the message of Islam. That's not a threat, that's what it is," Khattab said in the video.

While Khattab, who spoke to WND today, claimed his website is not issuing threats against Jewish groups, a second video posted on the site contains what can easily be interpreted as lightly veiled threats of violence against Chabad.

The video features a slideshow of images of wounded Palestinians and then repeatedly switches to pictures of Chabad's main headquarters in Crown Heights, Brooklyn. It then presents a picture of a blood-stained Jewish prayer book taken from inside a Jerusalem seminary following a deadly shooting massacre there last March that killed eight Jews.

The video ends with the sound of gunshots.

Asked whether the video montage was implying Chabad's headquarters should be targeted by Islamic violence, Khattab told WND, "It is what it is."

Khattab said he did not have the authority to issue a directive to carry out specific attacks.

Further petitioned to explain the intended meaning of the blood-soaked prayer book interspersed with images of Chabad's headquarters, Khattab replied, "Beauty is in the eye of the beholder."

"There is no such thing as Israeli civilian," he said. "I pray to Allah for the complete destruction of Israel."

In a video on his website, Khattab states he normally advises others to "just ignore [the Jews]. That's not racist. We don't like to deal with them ... but when there is a terrorist war of destruction, killing of kids ... [Israeli] genocide, then we have to take to the forefront."

Security bolstered at Chabad headquarters
Motti Seligson, a spokesman for Chabad, told WND although not all threats are serious, his organization is "work[ing] closely with law enforcement to ensure that all threats are handled properly, as safety is of paramount concern."

NYPD Commissioner Raymond Kelley called Chanina Sperlin, vice president of the Crown Heights Jewish Community Council, to assure him the police were looking into the situation and were taking any threats seriously.

Khattab said he was questioned by NYPD investigators.

Expert: Take threats seriously
One Chabad official, speaking on condition of anonymity, said he was not particularly concerned about the alleged threats.

But U.S. terrorism expert Steve Emerson said videos like those posted on RevolutionMuslim.com should be taken seriously.

"Any site that advocates violence or provides incitement to violence has to be taken seriously," he told WND.

'We appreciate support of American progressives'

Realizing his statement may attract the attention of U.S. law enforcement agencies, Khattab delivered a direct message to the NYPD, CIA and FBI: "You can put me in jail for the rest of my life. As long as I got that information out there for people, I did something. I didn't sit on my behind."

Khattab also lashed out against any website that may pick up on his statement.

"It just attracts Drudge, the JAWA report, Atlas Shrugs (blog), and Robert Spencer (Jihad Watch blog) and just other whining little queers and stuff like that."

But he celebrated what he said is his website's non-Muslim following of "progressive Americans, socialists, anarchists, communists ... people who can really contribute, they give us dialogue and send us nice e-mails."

Khattab, a 39-year-old New York taxi driver who converted to Islam from Judaism, said he launched RevolutionMuslim.com with the mission of "preserving Islamic culture," "calling people to the oneness of God" and asking them to "support the beloved Sheik Abdullah Faisal, who's preaching the religion of Islam and serving as a spiritual guide.

He told WND his site's main goal is to establish worldwide Islamic dominance. He runs the site from his home in Queens, N.Y., and even advertises his personal phone number.

Faisal, the website's spiritual adviser, was convicted in the UK in 2003 for urging his followers to kill Jews, Hindus and Westerners. In videotaped recordings, Faisal was taped delivering sermons calling on Muslims to use chemical weapons to "exterminate unbelievers" and "cut the throat of the Kaffars (nonbelievers) with (a) machete."

Khattab's website is no stranger to controversy. In the past it featured a video praising al-Qaida's beheading of Wall Street Journal reporter Daniel Pearl under the banner "Daniel Pearl I am Happy Your Dead :)," and a puppet show making light of U.S. soldiers killed in Iraq.
Posted by Unknown at 2:23 PM