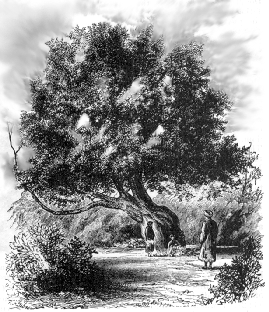 Tu Bishbat is a minor Jewish holiday celebrating the New Year of the Trees. It is one of the four Rashe Shanah ("New Years") mentioned in the Mishnah.

Tu Bishbat marks Rosh HaShanah La'ilanot "the New Year of the Trees." The name Tu Bishbat comes from the date of the holiday, the 15th day of Shebat. Shebat is the name of a Hebrew calendar month and read as "Tu," is how the number 15 is represented by Hebrew numerals using the Hebrew alphabet. This date generally falls on the second full moon before Passover, or, in a leap year, the third full moon before Passover.

Tu Bishbat started out as merely the date used in calculating the tithe on tree fruit, and evolved into a minor holiday.

Tu Bishbat is not mentioned at all in the TaNaKH. The earliest mention of it is the Mishnah which was completed around the year 200 CE. In fact even in the Mishnah it is only mentioned once in Masekhet Rosh Hashanah 1:1, which states there are four new years. Only two of the new years listed have any observances associated with them today: Rosh Hashanah and Tu Bishbat.

We follow the opinion of Bet Hillel and observe the fifteenth of Shebat as the New Year for Trees. Even so the Mishnah does not state anything festive about this day nor does it mention any particular celebrations or observances associated with this day. It is very probable that this day took on a more special meaning when the Nation of Israel was exiled from its land after the destruction of the Second Bet HaMiqdash around 68 CE. After many years living outside of Israel this day added another connection between the people and the land that their ancestors were thrown out from. That connection was none other than that of partaking of the fruits of Eress Yisrael that Israel was blessed with.

Over the centuries this custom became well known among Jewish communities in every corner of the globe but it wasn’t until the 16th century that this holiday was given a greater dimension. The Meqoubalim of 16th century Safed invigorated this holiday by prescribing what fruits and nuts to eat and in what order. They also said that 4 different cups of wine had to be drunk just like when the Hagadah would be recited on the night of Pesah.

These Meqoubalim were generally great Sephardic Rabbis who were steeped in the mysteries of the Torah. They had a belief that Creation is composed of four separate worlds, or levels. Classifying fruits that are eaten on Tu Bishbat into these separate categories helped to symbolize these levels.

The four worlds are:

There are no fruits that could fit into the highest level but there are fruits for each of the other 3 levels and it is preferable to have 10 fruits for each level, corresponding to the 10 Sefirot.

Group number 1 is all fruit.

BERIAH. Holiness at this level needs no protection. (Some of the fruits included in this group are not actually considered totally edible by most people, such as apples; small seeds are ignored in the symbolism.)

YESSIRAH. These fruits are edible on the outside, but have pits on the inside, such as peaches. The edible portion symbolizes holiness. At this level, holiness can be left exposed, but its inner core, its "heart," must still be protected.

‘ASIYAH. These fruits all have an inedible outer shell, such as nuts. The edible part of the fruit represents holiness. In our world, holiness is hidden and we have to seek it out. The fragile holiness has to be protected within our world.

There have been Sephardic Jews in every country over the last 350 years who have been reading from a book entitled Peri Ess Hadar (Salonika 1753) and following this ritual of eating fruits, drinking wine, and reading portions of the TaNaKH, Mishnah, and Zohar.

It was very common for special bags to be made for friends and neighbors, and especially children and fill them with all types of dried fruits and nuts.

In old Jerusalem where the majority of the Jews once spoke Ladino trays of fruit were sent as gifts like Mishloah Manot. These were known as Platiko. The special bags as Frutas Bolsas and kids would compare what they got and trade favorites with each other. These same customs existed in many other countries as well but without the Ladino names.

Many people would just try and have as many fruits as possible just to praise God and share this bounty with relatives and friends. Others would take this opportunity to study the laws of Berakhot and teach them to all those who celebrated with them.

In Aleppo Syria there was a special folkloric Judeo-Arabic song for this holiday whose tune is still popular today even though most people have forgotten the happy words. Another custom associated with Tu Bishbat in Halab was the reading of the Aseret HaDiberot with the translation (Sharh) of Se’adyah Gaon. This was done on Tu Bishbat in preparation of Perashat Yitro and the giving of the Ten Commandments which is always the Shabbat after Tu Bishbat.

Tu Bishbat is a happy day on which no Tahanunim are said it is a day that reconnects us with the Land of Israel and there is a new custom (over 100 years old) to plant trees in Israel on this day. The tradition of planting trees started in 1890 when the teacher and writer Zeev Yabetz went out with his students in a school in Zikhron Yaaqob for a festive planting. This initiative was adopted in 1908 by the Israeli Teachers trade union and later on by the Land Development Authority (Haqeren Haqayemet LeYisrael, also called the Jewish National Fund). Many Jews throughout the world call Israel on this day and make donations to plant trees and forests through out Israel on this New Year of Trees.