Some Jewish Names Lost to Time 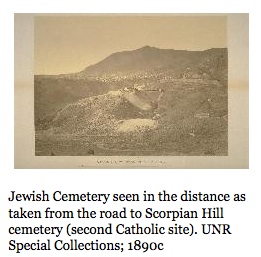 B"H
I usually cover news items, but I thought that this information was important to those of you who do genealogical research, so I wanted to share it with you right away.
After I wrote the post on the Hebrew Cemetery in Virginia City, NV, and the effort to get information about Jewish Cemeteries in the United States that are in danger of disappearing under the ravages of time, I contacted the The Jewish Cemetery Project of the International Association of Jewish Genealogy Societies and told them about Virginia City.
I was pleased to find out that there is already an group of Synagogues in Reno assisting the Comstock Cemetery Association in repairing and restoring the Hebrew Cemetery in Virginia City.
Meanwhile, I remembered an old book, by Verna Stumpf Paterson, a historian at the University of Nevada, Reno.  I had come across the book when I was a teen.  It was called Cemeteries Records of Nevada and it was published in 1960.
The reason this book is so important is that she recorded the names and inscriptions on Comstock graves all over Nevada before they were destroyed, washed away, displaced by building projects, or completely obliterated by time.
I was unable to find the book, but I did find the special collection of Verna Stumpf Paterson's papers at the University of Nevada, Reno, which includes (Thank G-d!!) the manuscript of her book.
With some help from the wonderful Special Collections Librarian, Joel Guldner, I got a copy of the list of those buried at the Hebrew Cemetery, as recorded by Verna Stumpf Paterson, and the information from their gravestones.  My thanks go out to Joel for his professional and attentive service in finding these records promptly.
I checked to see that this information was not available elsewhere.  It wasn't.  There is an old list posted by the USGenWeb Project from 1997, which has some additional names not included here--but some of the names on that list are wrong according to Verna Stumpf Paterson's manuscript (for example REES is recorded as REEB).  The USGenWeb list doesn't reveal where they got the information, so I am unsure of its veracity.

I know where Verna Stumpf Paterson got her information, though--she walked up to the cemetery and recorded it.   So, in an effort to assist all those Jewish Genealogists out there, here is Verna Stumpf Paterson's list of those buried in the Jewish Cemetery.
Because I only needed the pages for the Hebrew Cemetery, I have included only the names and gravestone inscriptions for the Hebrew Cemetery.  However, I wanted to also include the table of contents from the book in case anyone else is looking for records of the other cemeteries, so you know where to find them!
The following is transcribed from Verna Stumpf Paterson's book, Cemetery Records of Nevada, 1960.  Manuscript.  Special Collections, University of Nevada Reno.
M
Contents
Cemetery Records of Nevada
Catholic Cemetery, Virginia City, Storey County--Pages 1-24

These cemetery records are from the Comstock area, including Dayton which is down the river from where the first gold was discovered and Washoe City, the site of some of the mills.

This cemetery is located more than a half a mile north of the Protestant Cemetery.  The road is still washed out, which made it necessary to walk in.  The fence is gone and cattle graze through.

These inscriptions were copied and checked, November 1958; arranged and typed, February 1959 by Verna Stumpf Paterson (Mrs. Chester A.) 337 Moran Street, Reno, Nev.  Member of the Reno Chapter, Daughters of the American Colonists National Chairman, Colonial & Genealogical Records Committee National Society, Daughters of the American Colonists
Posted by Unknown at 8:13 AM