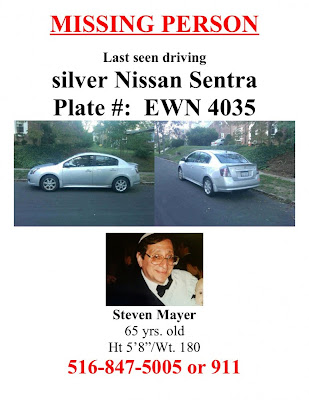 UPDATE:  Sadly, Mr. Mayer's body was found over Shabbat, on October 16, in a wooded area in Riverhead.  May Hashm comfort his family.

B"H
Today, Sunday, October 10, 2010, the Boro Park Shomrim, in coordination with many other community groups will begin a massive search for Steven Meyer, a metals trader from Great Neck, NY.
Searchers will be meeting in Riverhead, NY at the:
HOLIDAY INN EXPRESS HOTEL & SUITES EAST END
1707 Old Country Road Route 58
Riverhead, NY 11901. (click for map)
The search will begin at 8:30 a.m. and continue throughout the day. Volunteers can arrive at any time during the day.
Shacharit Minyan will be a 9:30 for anyone in need.
All volunteers are requested to report to the staging area, as the search is carefully planned and will be conducted in a specific way.
Volunteers are asked to bring enough food and water for the day.
The is an urgent request for anyone with specialized search equipment, including boats, ATVs, or connections to caterer for food that would also be helpful to the organizers  to call 347-927-7701.
Please read the most recent news article (below) for information on this missing man.
M
-----

The family of Steven M. Mayer is circulating this flier.

The family of a missing Great Neck who is believed to be in the Riverhead area is hoping to redirect the search to finding the man's car, since the car would be easier to find and could then give clues to his whereabouts.

That car is a silver 2010 Nissan Sentra four-door sedan, and its license plate is EWN-4035.

Steven  M. Mayer, 65, of Great Neck was last seen at about 7:30 a.m. on Monday morning. On Monday afternoon, he made a cell phone call to his deceased parents number, which is no longer operational, and that call came from a  cell tower in Riverhead, his family said.

He made several calls to numbers that either weren't operational or were unanswered and all were from the Riverhead area, his son Jason Mayer said Friday. It is believed that the older Mr. Mayer's cell phone battery has since died.

Jason  Mayer said there had been information since Monday that suggested his father may have been on western Long Island, but that information has since been discounted and the search party is once again concentrating on the Riverhead area.

Mr. Mayer is described as being 5-foot,  8-inches tall and weighing about 180 pounds. He is white, has brown hair and glasses and was last seen at 40 Radnor Road in Great Neck, in Nassau County on Monday at 11:30 a.m.

It is not known what he was wearing.

Mr.  Mayer works as a metals trader in Huntington and would not have been in  the Riverhead area, which is why family members believe he may have had  a seizure or some type of sudden health problem that caused him to be lost or disoriented.

Volunteers have been combing the area looking for Mr. Mayer and a police helicopter also has assisted.