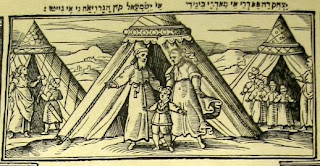 A Parable on Life's Meaning: Thoughts on Parashat Hayei Sarah

October 30, 2010
http://www.jewishideas.org/angel-shabbat/parable-lifes-meaning-thoughts-parashat-hayei-
By Rabbi Marc D. Angel
In this week's Torah portion, we read of the deaths of Sarah and Abraham--the founding couple of ethical monotheism and of the people of Israel.  Their lives have left a profound imprint on human history; as we ponder their lives and deaths, it would be well to ponder the meaning  of life for ourselves. A rabbinic parable offers keen perspective. (The  following is drawn from my book, "Losing the Rat Race, Winning at Life," Urim Publications, 2005.)
A rabbinic parable tells of a poor man who was struggling to support his family. He learned of a faraway land that was filled with precious jewels. A ship would soon be leaving for this land and it had room for him as a passenger. But the ship would only return after an interval of unspecified length. His wife agreed that he should make the voyage, so as to be able to obtain valuable jewels to bring back to support his family in wealth and honor.
So the man boarded the ship and was off to make his fortune. Sure enough, the ship arrived at the faraway land, and it was indeed filled with treasures. The earth was covered with diamonds and all types of precious stones. He hurriedly filled his pockets with jewels; he stuffed  his bags with gems. He was now an extraordinarily rich man. He rejoiced  in the thought of how wealthy he and his family would be upon his return home.
But in the faraway land, the man soon realized that his precious stones were valueless. They were so abundant that no one paid any attention to them. None of the storekeepers would accept them as payment  for merchandise. Rather, the currency of this land was wax candles.  These were hard to come by, and were highly valued by the public. Everyone strove to accumulate as many wax candles as possible; their wealth and power were evaluated by the number of candles they possessed.
It did not take long for the man to recognize his need for wax candles. He worked hard to gain as many as he could. Soon, he had accumulated a large number of them. He emptied his pockets and bags of the diamonds, rubies and emeralds, and filled them instead with wax candles.  In this new land, he became wealthy and prominent--very successful.
Time passed. It was now time for the man to return to his wife and family. The ship was ready to leave.  Quickly, the man packed as many wax candles as he could. He proudly boarded the ship, laden with as many  candles as he could possibly carry.
When he arrived home, his wife eagerly greeted him. She asked to see the treasures he had brought back. Proudly, the man opened his bags and emptied his pockets. He stacked up piles of wax candles. His wife was astonished. "You spent all that time in the faraway land, a land filled with precious jewels, and you brought back only piles of worthless wax candles?"
Suddenly, the man realized he had made a terrible mistake. When he had arrived in the faraway land, he knew he was supposed to gather precious gems--but he had soon forgotten his mission. Influenced by the people in that land, he had come to value candles and ignore jewels. He had thought that by accumulating candles, he had become successful. But now that he had returned home, he realized that he had missed his opportunity to bring back real treasures. Instead, he came back with a pile of nearly worthless candles.
We are placed on earth to attain transcendent treasures--wisdom, love, spiritual insight, moral courage, Torah and mitzvoth.  If we can keep our lives focused on these goals, we can return to our heavenly home with genuine treasures. But in this world, people chase after "wax candles"--material wealth, fancy cars, glitz, hedonistic lifestyles.  In  this world, people are judged "successful" by the false standards of materialism and hedonism. It is possible to lose sight of our real treasures and goals, to pursue the values that pervade our society. When  we finally return home--to our heavenly home beyond--we may realize that we are bringing with us "wax candles" instead of precious jewels--that we had lived our lives chasing falsehoods and vanities, rather than pursuing goodness, truth and piety.
Winning at life means keeping focused on what is truly important and not getting sidetracked by external glitz. Winning is not a one time event, but an ongoing way of life.
***Please share the Angel for Shabbat column with family and friends.  Have you read the newly posted article by Rabbi Benny Lau on our website  jewishideas.org?
Posted by Unknown at 3:20 AM