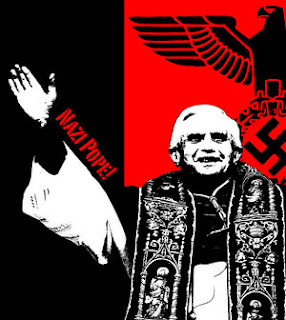 B"H
Well, I guess the Catholic Synod in Rome knows more than the Bible, more than G-d?
According to them, Jews are "no longer the chosen people."
Last I checked, G-d doesn't change His covenants, His promises, or His Word.
And, according to Vatican II's "DECLARATION ON THE RELATION OF THE CHURCH TO NON-CHRISTIAN RELIGIONS--NOSTRA AETATE--PROCLAIMED BY HIS HOLINESS POPE PAUL VI ON OCTOBER 28, 1965":

As Holy Scripture testifies, Jerusalem did not recognize the time of her visitation,(9) nor did the Jews in large number, accept the Gospel; indeed not a few opposed its spreading.(10) Nevertheless, God holds the Jews most dear for the sake of their Fathers; He does not repent of the gifts He makes or of the calls He issues-such is the witness of the Apostle.(11) In company with the Prophets and the same Apostle, the Church awaits that day, known to God alone, on which all peoples will address the Lord in a single voice and "serve him shoulder to shoulder" (Soph. 3:9).(12)

Hmmm.  It seems that Vatican II clearly states that Jews DO have rights to the "gifts He makes or of the calls He issues" (i.e. our right to Israel and Jerusalem.)  It seems the Synod is busy undoing Vatican II, at least in this respect.
Of course, they won't be undoing the Synod itself, it seems--which was also a Vatican II issue.
Interesting  how the Nazi Pope hates Jews, and suddenly everything the Jews do is wrong.  That is, even though Vatican II also says:

Furthermore, in her rejection of every persecution against any man, the Church, mindful of the patrimony she shares with the Jews and moved not by political reasons but by the Gospel's spiritual love, decries hatred, persecutions, displays of anti-Semitism, directed against Jews at any time and by anyone.

Interesting how the Synod has completely ignored this section of Vatican II, and substituted political considerations for those promised in this document.
I guess along with the replacement theory (supersessionism) that we thought had disappeared from the Catholic Church.
I understand that the Catholic Church thinks of the Pope as a representation of "Christ on Earth" and the Bishops are supposed to be like his Apostles, but I don't think I realized that the Pope can start to think of himself as G-d.
It is shocking how easy it is to make G-d into your own image isn't it, Herr Pope?  (Maybe you can make your mother into a virgin too!)
I am eagerly awaiting the other shoe to drop, you know, the one where the Catholic Church goes back to how the Jews killed their man-god?
Believe me, it isn't far behind!
Get ready.  We should have been prepared when he wanted to make the murderous and bloody Isabella into a saint.
And then, when he wanted to canonize the holocaust pope.
Oh, and there was the "rehabilitation" of the Bishop who denied the Holocaust, and how he began saying the prayer to convert Jews once more in the Easter service.
But we aren't supposed to think of him as the "Nazi Pope" right?  We are all supposed to swallow that drivel about him being "forced" to join the Nazi Youth.
Yeah, right.  Nice spin, but I think the truth speaks in actions, not words.
Now, it's all out war on the Jews--again.  Sigh.
Perhaps he thinks that Jew hatred will get people praying in his cathedrals again and detract from the child sex charges?  Or maybe he just wants to recreate the beautiful relationship between the silent Catholic Church, the hate-filled heads of Europe, and the murdering arab terrorists?
Nazis don't fall far from the tree, do they, Herr Pope?
Everyone who is Catholic better get into Latin classes fast, I bet that's next (or maybe he will decide German would be a better language?).
Wow.  I hope this convinces Bibi, once more, that the Catholic Church is not our friend, they can't be trusted, and that they should never have the title to one inch of our land.
Keep the taxes high, and protect the Tomb of David against these pagan Pope-worshipers!
May they soon find the error of their ways, and may Hashm, the TRUE JUDGE, render His verdict upon this Synod.
M
-----
Deputy Minister Charges Archbishop with Anti-Jewish ’Libel’
http://www.israelnationalnews.com/News/News.aspx/140256
by Tzvi Ben Gedalyahu

The Catholic Synod in Rome last week was “hijacked” by anti-Zionists, Deputy Minister Danny Ayalon has charged. Ayalaon also was “appalled” at  an Archbishop’s statement that the Chosen People concept no longer applies only to Jews.

"We express our disappointment that this important Synod has become a forum for political attacks on Israel in the best history of Arab propaganda," Ayalon said. "The Synod was hijacked by an anti-Israel majority."

He called on the Vatican to distance itself from the “libel” in remarks  by U.S. Archbishop Cyrille Bustros, a Lebanese native who chaired the Synod committee that summarized its criticism of a Jewish presence in united Jerusalem, Judea and Samaria.

The cleric also told reporters that the Biblical promise that the Land of Israel is for Jews, as the Chosen People, was "abolished by the presence of Christ." He added, "For Christians, one can no longer talk of the land promised to the Jewish people… There is no longer a favored people, a chosen people; all men and women of every country have become the chosen people.”

"We are especially appalled at the language used by Archbishop Bustros during his press conference," Ayalon remarked. "We call on the Vatican to distance themselves from Archbishop Bustros' comments, which are a libel against the Jewish People and the State of Israel and should not be construed as the Vatican's official position. These outrageous comments should not cast a shadow over the important relationship between the Vatican, the State of Israel and the Jewish People."

After two weeks of discussions, the Synod called on the international community "to end the occupation of Arab lands." Bustros added, “The theme of the Promised Land cannot be used as a basis to justify the return of the Jews to Israel and the expatriation of the Palestinians."

Yigal Palmor, spokesman for the Foreign Ministry, said the Synod clerics who expressed concern over the dwindling number of Christians in  Israel were "committing a sin towards the truth" by forgetting to mention that "Israel is the one country in the region that is welcoming to Christians."