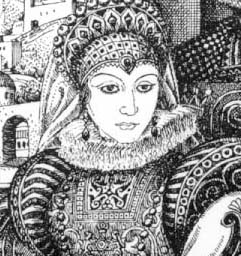 B"H
Among Sephardim, Doña Gracia is well known, but for many in the Jewish world, they do not know her.
She is a true woman of valor, a 15th Century Esther, who truly asked herself for what reason Hashm had placed her a position of power and influence.
She had, like Esther, seen the evil king and queen of Spain (may their names be forever cursed and forgotten) order the destruction, death, and exile of the Jews of Spain.
Like Esther, Doña Gracia took the money and the influence she had, and used her place to not only save lives, but save Jewish culture and tradition by establishing synagogues and schools, and by rebuilding Tiberias into a Holy city once more.
May every Jewish child know her name, and may her legacy live, forever!
M

-----
The true founder of the Zionist Movement?
Once the wealthiest woman in the world, Dona Gracia planned to establish an autonomous Jewish community in Tiberias.
By GREER FAY CASHMAN http://www.jpost.com/Israel/Article.aspx?id=192797

She was more than 300 years ahead of Theodor Herzl  in conceiving a movement whereby Jews would once again take possession of their spiritual homeland, and way ahead of Baron Rothschild in buying property in the Land of Israel, but only now is Dona Gracia (Gracia Mendes Nasi), once the wealthiest woman in the world, being accorded her rightful place in Jewish and Israeli history.

The 500th anniversary of her birth in Lisbon to a family of Marranos, originally from Aragon, that fled to Portugal when Queen Isabella and King Ferdinand expelled the Jews in 1492, was celebrated on Sunday at Beit Hanassi.

Various novels have been written about her, with a blending of fact and fiction, but she has entered Israeli consciousness only in recent years.

A true heroine of Jewish history, she was largely ignored, according to Dr. Tzvi Schaick of Tiberias, because history was by and large written by men who were unwilling to credit women with power and achievement.

The one place in Israel where her memory has long been revered is in Tiberias, where there is a Dona Gracia Museum, of which Schaick is the director and curator.

The museum, known as Casa Dona Gracia, is part of the Dona Gracia Hotel that is owned by the Amsalem family, veteran residents of Tiberias with roots in Morocco and Turkey that in all probability stretch back to Spain and Portugal.

The family also owns Amsalem Tours, which together with Schaick, the Tiberias Municipality, the Galilee Development Authority, the Tiberias Hotel Association and former MK Geula Cohen has been working for years to promote awareness of Dona Gracia.

The museum conducts weekend seminars about the life and times of Dona Gracia, whose story fired Cohen’s imagination to the extent that she pushed for the Education Ministry to include the study of Dona Gracia in school curricula.

Tzvi Tzameret, a former director- general of Yad Yitzhak Ben- Zvi and currently the chairman of the ministry’s Pedagogic Secretariat, agreed that it was high time for Dona Gracia to come out of the mothballs of the distant past. The upshot is that high school students and soldiers will now learn of her plans to establish an autonomous Jewish community in Tiberias, which from the second to the 10th centuries was the largest Jewish city in the Galilee, and a great seat of Jewish learning.

Sunday’s anniversary celebration at Beit Hanassi was held in the presence of President Shimon Peres, Yitzhak Navon, the fifth president of the state who now heads the National Authority for Ladino, Education Minister Gideon Sa’ar, Foreign Minister Avigdor Lieberman and Supreme Court President Dorit Beinisch, among a host of dignitaries.

Cohen, a former Lehi (Stern Group) fighter who was arrested by the British in 1946 but escaped from jail in 1947, and an Israel Prize laureate, was credited several times over with initiating the Dona Gracia festivities – so much so that Peres said he was tempted to call her Dona Geula.

Peres observed that it was easier to reach the peak of Mount Everest than the heights attained by Dona Gracia, whose influence was felt all over Europe and whose enormous wealth also influenced the sultan of Turkey.

The place of women was submerged in the annals of time, he said, because men went out and fought the battles. They were the heroes of wars, of conquests and of rule.

Under the circumstances, it was hardly surprising that the story of Dona Gracia was buried for centuries and almost forgotten.

“She was larger than life,” the president said, his voice ringing with astonishment as he recounted her travels, her rescue of Jews expelled from Spain and Portugal, and the manner in which she provided havens for conversos like herself. The amazing thing, he said, was that she was able to achieve so much in so short a life. She was only 49 when she died in 1569.

Sa’ar described Dona Gracia as “a woman before her time,” preceding Herzl in her vision of a Jewish homeland and becoming a Zionist before the term was coined.

She was an extraordinarily generous woman and a great leader, he said.

Brig.-Gen. Eli Shermeister, the army’s chief education officer, said, “The values she espoused are part of our heritage. I salute her in the name of the IDF.”

Schaick, dressed in 16th-century costume in keeping with the occasion, said that to celebrate Dona Gracia’s 500th birthday at Beit Hanassi was the realization of a dream.

“Since the establishment of the museum 10 years ago, we dreamt that the day would come when Dona Gracia would be given official recognition by the state, and that day is here,” he said.

Dona Gracia discovered only on her 12th birthday, in 1522, that she was not a Christian as she had thought, but was in fact Jewish.

Moreover, her name was not Beatrice de Luna Miguis, the name under she had been baptized in Lisbon where she was born, but Hana Nasi, the daughter of Shmuel Nasi.

When she was 18, her father married her off in a Catholic Church ceremony to Francisco Mendes. She could not understand how her father could do this to her after having revealed that they were Jews who practiced their Judaism in secret.

It subsequently transpired that her husband too was a converso and they had another wedding ceremony in accordance with the Law of Moses and of Israel. It was a happy marriage and in the course of time she bore him a daughter, Reina. However, when Dona Gracia was only 25, her husband died. He willed nearly all his enormous wealth to her, including ships, the second largest bank in Europe and other assets, which she used to help her people. Payments to the pope delayed the establishment of the Inquisition in Portugal.

She was betrayed to the authorities by her jealous sister, and it was only with the help of the sultan of Turkey, Suleiman the Magnificent, that she was released. She persuaded the sultan to lease her Tiberias, which she wanted to rebuild to its former Jewish glory. Meanwhile, she paid for the construction of synagogues, places of study and Hebrew printing presses in places of Jewish dispersion.

She sent people to live in Tiberias, and she paid for the city to be rebuilt. Her people completed construction of the southern city wall, and were about to begin building a permanent home for her so that she could move from Turkey to the Holy Land. However, she died first, in 1569.

Cohen disagreed that women had been overlooked in the saga of Jewish heroism. She mentioned heroines of the War of Independence such as Hannah Szenes, and then went through biblical heroines from the matriarchs to way beyond.

Cohen said she was glad that Dona Gracia had at last come to light and she hoped that she would cast her light on those of today’s youth who have lost their way.

Ya’acov Amsalem said that for as long as he could remember, he had wanted to preserve the heritage of Dona Gracia.

Together with Cohen, he presented Peres with the Dona Gracia medallion.

Actress Hila de Castro, doing a riveting one-woman show as Dona Gracia, related the heroine’s meetings in the next world with Herzl, where among other things they discussed Zionism.

“He gives me credit,” she said.