Who Is The Enemy of "Peace"? Terrorist Murderers Intended to Kidnap Bodies, Bring Down Abbas 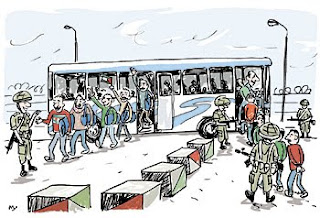 B"H
Why must we constantly give up terrorists, land, and the lives of our people for this fictional "peace"?  Meanwhile, our Jewish inmates experience harsher conditions and longer sentences because they don't engage in terrorism?  This makes no sense.
Why does Israel have this revolving door for terrorists?  The terrorists don't care about being arrested because they know that they will simply be released in the next round of "peace talks," blood on their hands or not.
How does releasing murderers contribute to this fictional "peace" that Obama and Hillary are so keen on bringing to fruition?
Clearly, a Hamas terrorist who has just been released from an Israeli jail and who planned not only a terrorist attack, but the kidnapping of bodies in order to "use them to demand the release of imprisoned terrorists, sabotage the peace talks, and bring about the resignation of Mahmoud Abbas and the collapse of the Palestinian Authority," is not the best friend of the President, his cabinet, or the great unwashed crowds who congregate on street corners dressed in tank-tops and keffiyahs and calling for "peace" and pretending they are there because they care about "Palestinians."
Most of those in the crowds wouldn't be able to find Israel or Gaza on a map, and have no clue what is happening.  They are standing on street corners because it is the thing to do, because some Facebook friend invited them, or because they just want to do something that smacks of anti-establishment thinking so they can live-out their college protest fantasies, singing "we will overcome," when all they are really interested in is playing dress-up.
Well, sorry boys and girls, your side-show once more gives way to the main attraction:  a group of murdering terrorists.
When you were buying your Birkenstocks and straightening your keffiyah, did you think about how the pregnant mother of six small children paid with her life for your juvenile expression?  Did you think about her husband who died trying to protect her and her unborn child, so close to being born?
Did you consider how a young bride might feel as she packs up the apartment where she planned to build a life with her husband?  Did you think about the little girl who will go to bed without the soothing voice of her mother to comfort her?
Wake up.
You are being manipulated by some very evil men, and you are falling for it.  That's what happens when you stand for nothing--you end up supporting men who will not only shoot a pregnant woman in cold blood, but plan to abduct her body to hold ransom in order to destroy the precious "peace" that you seem to hold in such high esteem.
Maybe the next time you are admiring your look in the nearest mirror, you should think again about who might be the enemy of peace.
M

Two important facts about last month’s terrorist murder of four Israelis, including a husband and his pregnant wife, have come to light:  The mastermind was recently released from Israeli prison, and the killers sought to kidnap the bodies.

Just three weeks ago, near Beit Haggai south of Hevron, Palestinian terrorists drove past an Israeli car carrying four Jews – and shot all of them to death. Yitzchak and Tali Imas were the parents of six children, and Tali was about to give birth; Kochi Even-Chaim, mother of one; and Avishai Shindler, married barely a year.

It has now been learned that the mastermind of the attack was Nasat Karmi of Hamas. Karmi was in prison for other terrorist crimes, and was recently released when his term was up. However, he soon afterwards became involved in terrorism once again – and was listed as the IDF’s number one wanted terrorist in the Hevron region.

In addition, the Egyptian Al-Ahram newspaper reported today that the murderers of the four planned to abduct the bodies, use them to demand the release of imprisoned terrorists, sabotage the peace talks, and bring about the resignation of Mahmoud Abbas and the collapse of the Palestinian Authority.

A car that happened to pass by just after the quadruple murder thwarted the grandiose Hamas plans.

Al-Ahram reported that this information originated from the terrorists themselves, during their interrogation by PA security forces. The murderers said they expected that the abduction would lead Israel to withdraw from the talks and the IDF to enter local Arab villages en-masse and search for the kidnappers.  This would then cause Abbas (Abu Mazen) to resign.
Posted by Unknown at 5:41 AM